The Twilight Zone Tower of Terror™ (facts & the ride’s inspiration) 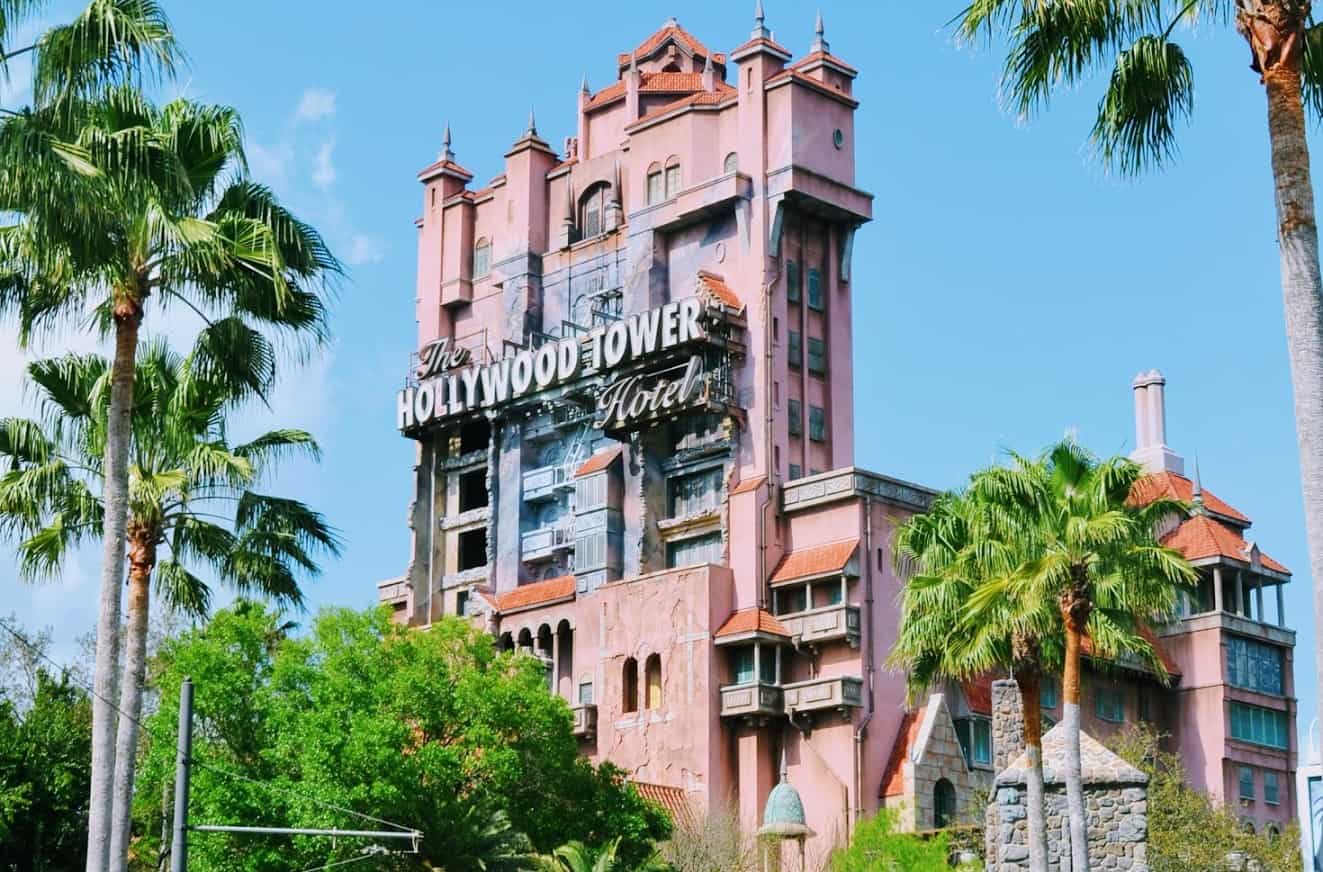 Tower of Terror is a thrilling free-falling attraction at Hollywood Studios.

Inspired by The Twilight Zone, guests step inside the Hollywood Tower Hotel and board an abandoned elevator shaft that makes several drops up and down 13 stories.

Everything You Need To Know About Tower Of Terror

You can find Tower of Terror at the end of Sunset Boulevard. You can’t miss it. Here’s the location on the map.

You can use Rider Switch for Test Track. If you don’t know, this is Disney’s system that allows guests with small children to take turns riding bigger rides, while another person/people wait with the little one. There isn’t a  Single Rider Line available.

Tower of Terror first opened at Hollywood Studios on July 22, 1994, when the park was still known as MGM Studios.

Not only is the ride inspired by popular and classic hit series The Twilight Zone, which first debuted in 1959, but there is, in typical Disney fashion, an overall story to the attraction.

The storyline is as follows (via Disney Parks Blog):

“On Halloween night in 1939, a thundering storm descended on Hollywood hills, trapping several guests in the lobby of the star-studded Hollywood Tower Hotel. A party of five entered the elevator — a couple, a bellman, a child actress and her governess — and with one crack of lightning, each of them vanished. Now, on a night ‘much like this,’ guests are welcome to follow in their footsteps and take a ride in a service elevator that leads ‘directly to … The Twilight Zone.'”

More and more drops have been added to the attraction over the years. Now, there is advanced technology that allows for the elevator to drop at random, meaning you’ll get a different experience each time.

Tower of Terror’s queue is both inside and outside featuring area music that perfectly fits the theme of the ride. This also isn’t an interactive queue.

The exterior line weaves throughout an outdoor courtyard before going inside the Hollywood Tower Hotel’s lobby that has been abandoned for years made evident by the props and the many cobwebs.

There is also a pre-show narrated by Rod Serling from the original Twilight Zone series that sets the whole tone before guests enter a queue in the boiler room and board an abandoned elevator shaft for a thrilling ride.

Tower of Terror has numerous vertical drops that go up and down. If you need it, we have a guide on motion sickness that’s filled with information and tips.

Each ride vehicle, or elevator, has a total of 21 seats that can fit seven guests per row. There is also an aisle that separates four guests on the left and three guests on the right.

There is a safety belt for guests to fasten across their lap, along with handles between each seat and on the walls of the ride vehicle, if you prefer to hold on.

Tower of Terror is on the scarier side. Between the storyline, the theming, and the ride, there are some moments that might frighten little ones. Plus, the ride drops up and down in the dark. We have a full guide on several other things that might scare little ones at WDW.

Your photo is taken on Tower of Terror and the photos always turn out great. Whether you’re a hands-in-the-air type person or someone who grips on for dear life, these on-ride photos are super fun.

The camera is directly in front of you and the flash goes off as you’re waiting to drop, so be prepared!

When you ride with a MagicBand and a linked Memory Maker entitlement, your photo will automatically be uploaded to your My Disney Experience account. The same can be said if you’re a WDW Annual Passholder.

Be sure to read more on PhotoPass and how Memory Maker works.

At the end of the ride, there’s also a touch point for those without a MagicBand to tap their park ticket or Memory Maker card. Your photo will then be added to your account.

Here is a ride-through video that gives you an idea of what it’s like to ride Tower of Terror.