A spoiler-free guide to Mickey and Minnie’s Runaway Railway 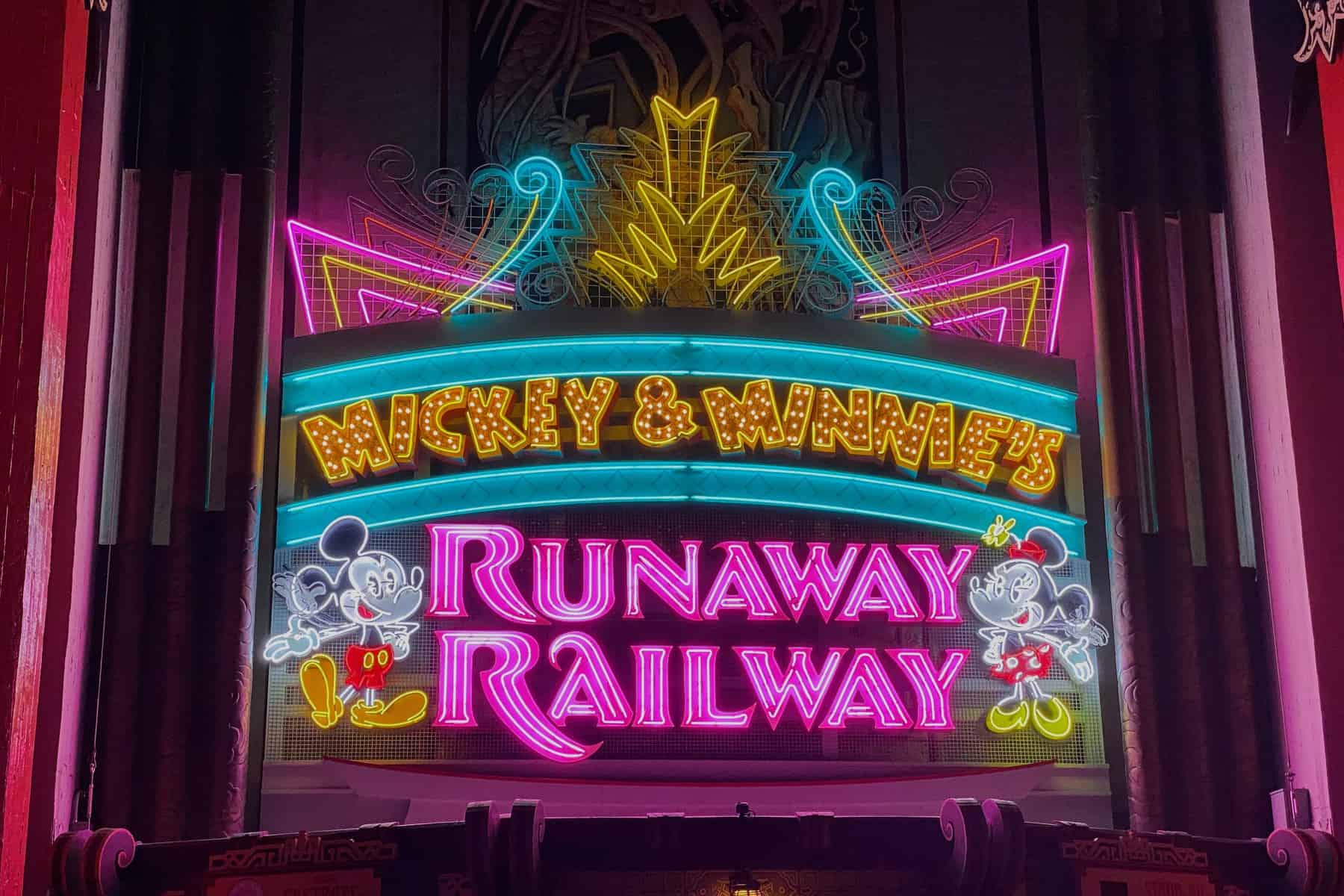 After riding it a few times, we think Hollywood Studios has a hit on its hands with the brand new Mickey and Minnie’s Runaway Railway.

Located in the Chinese Theater, this fun new attraction is based on the hit Mickey Mouse cartoon shorts and we think fans – both young and old – will delight in the entire experience.

And, no worries if you’re trying to avoid learning any of the details; we’re keeping this post spoiler-free.

We do think that there are a few things you should know before you go, though.

Know before you go: Mickey and Minnie’s Runaway Railway

As with any new attraction, there’s typically lots of questions as to how things work, what to expect, etc.

Here’s what we know:

One of the best things about this fun (and dare we say zany?!) new attraction is that it is 100% family-friendly. 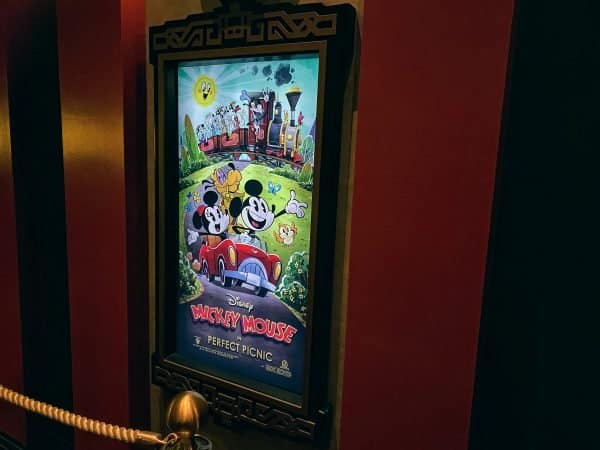 Unlike the other two Tier 1 attractions at Hollywood Studios, this one has no height requirement making it a great option for families with little ones looking for something that everybody can ride together:

Lap sitting is allowed, however, the ride is a bit jerky in places so that is something to keep in mind if you have a teeny tiny little one.

And our favorite part?

Even though this ride has no height restrictions, it doesn’t feel like a kiddie ride at all.

After Rise of the Resistance opened up using a virtual boarding group system, there was much speculation on whether or not Mickey and Minnie’s Runaway Railway would do the same.

Instead of doing that Disney has included it in its FastPass+ lineup at Hollywood Studios:

But, since you can only pick one Tier 1 attraction as one of your initial 3 FastPass+ reservations,  you’ll have to make a difficult choice.

The good news is, we think there is justification for choosing any of the Tier 1 attractions as your FastPass+ Tier 1 option.

The bad news is, because they are all 3 so popular, which one you get may depend solely on what is available when you FastPass+ window opens.

If you do have options, here’s some things to keep in mind: 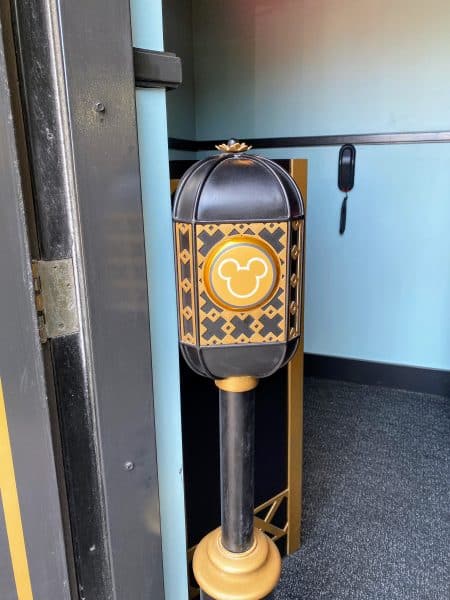 In general, when it comes to trying to fit in all 3 of the Tier 1 attractions, your best option will be to aim to get a FastPass for Slinky Dog Dash or Mickey and Minnie’s Runaway Railway.

Whichever one you don’t get a FastPass+ for you can ride at Rope Drop, and then add in Smugglers Run via the Standby Line later in the day when the wait times drop OR if Single Rider Line is available, you can use that.

The music will stick with you

Attractions like “it’s a small world”, Pirates of the Caribbean, Haunted Mansion, and the Enchanted Tiki Room are all known for having musical scores that get stuck in your head, and we think this one does, too.

The fun and upbeat tune “Nothing Can Stop Us Now” (not the Starship version, by the way) is peppy and one of those tunes that just stick with you.

It only took a ride or 2 before we were humming along.

MMRR is not available for Extra Magic Hours

Like Rise of the Resistance, at least in the beginning Mickey and Minnie’s Runaway Railway won’t be available during Extra Magic Hours.

No word yet as to whether or not that will change, but for now you’ll have to ride it during normal park hours.

While this attraction isn’t as complex as Rise of the Resistance, there is still a LOT of tech involved and like anything brand new, there is a higher-than-average chance that the attraction might go offline for a bit each day.

If you have a FastPass and an attraction goes down, you generally receive a push notification in the My Disney Experience App and/or an email advising you as to what happens next.

Whenever possible, the standard procedure is to get a replacement FastPass that can be used anytime during the day, but as always, procedures can change so if you experience a ride closure during your FastPass window and you’re unsure what to do, our best advice is to speak to one of the members of the Guest Experiences team (check the My Disney Experience app for the closest location).

The experience is immersive

Disney has described this attraction as “2 1/2 D”. 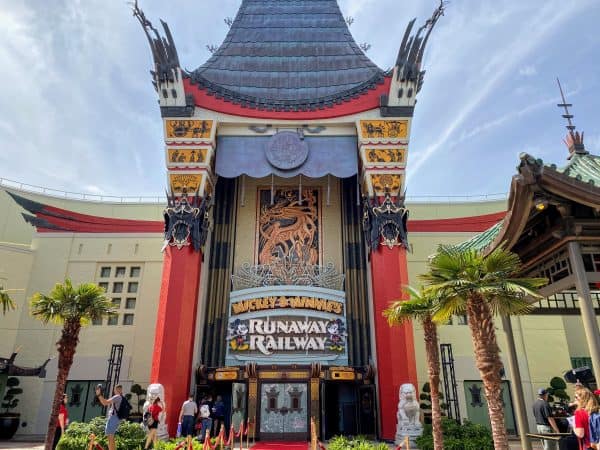 It’s kind of tough to describe without giving any spoilers but the Imagineers worked some magic to create layer upon layer of effects that suck you right in.

Staying spoiler-free, there are a few spots that might be tough for people with motion sickness.

The ride vehicles themselves are trackless (much like Rise of the Resistance), and there are some tight turns, slight jerking, and a brief period of motion simulation. But, each of those sections are very brief (15-30 seconds).

Want more Mickey? You can catch him nearby!

Fans of the Mickey cartoon shorts will be happy to learn that a nearby theater has been re-imagined into the Mickey Shorts Theater. 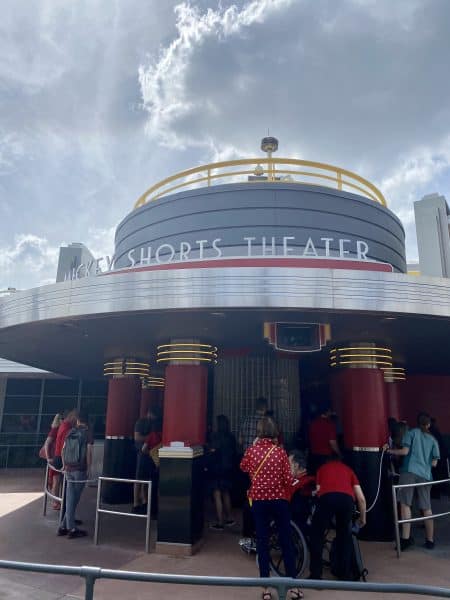 This refurbishment included a fun Mickey-themed paint scheme and a festive new sign on the outside. 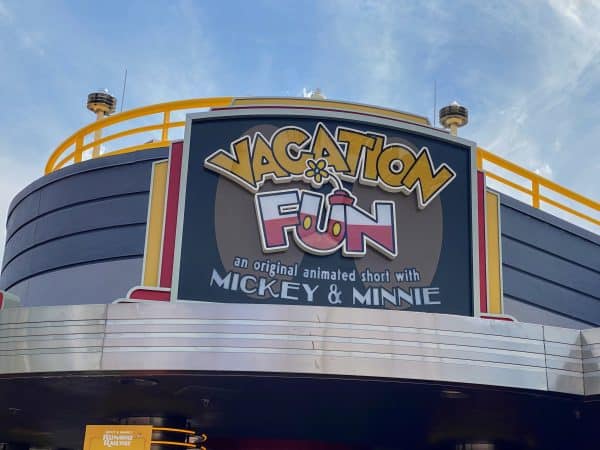 But our favorite part of this overhaul is definitely the adorable new Mickey-themed seats that they’ve added inside! 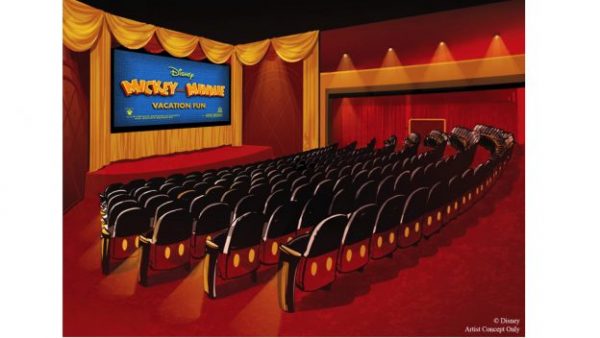 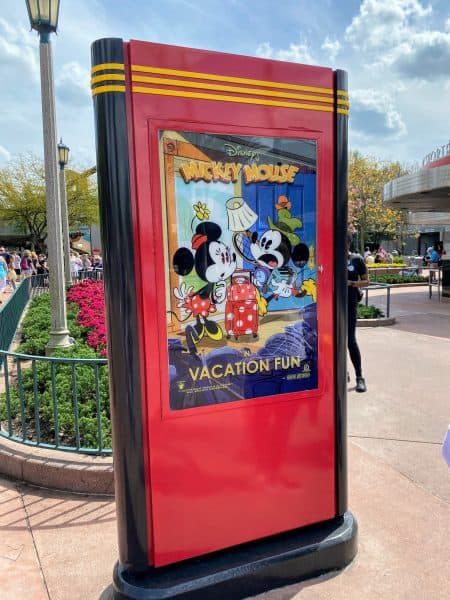 This cute theater is the perfect place to rest your feet and cool off for a bit while watching a funny little cartoon.

And, it is also a great spot for fun photo ops.

Located in the exit area, you’ll find several large backgrounds where you can snap a few pics. 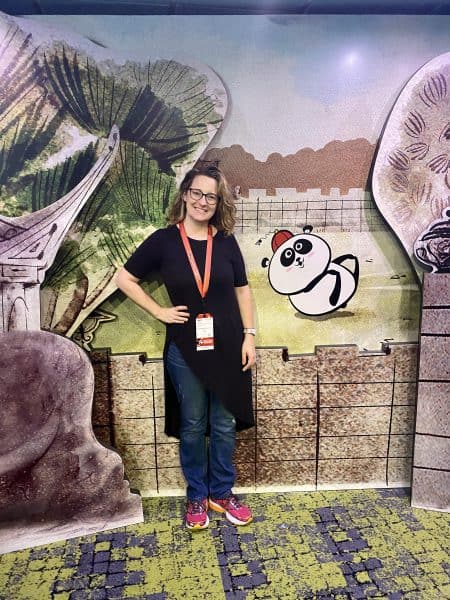 Because of the location of these photo ops, if you’re short on time or unable to stay for the entire show, guests are welcome to pop into the exit to access the backgrounds. 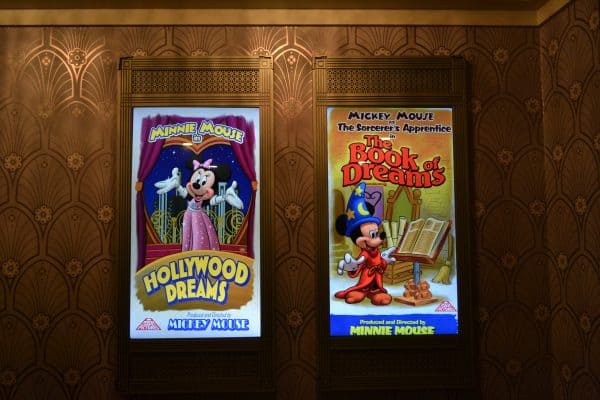 Here you can meet Mickey as Sorcerer Mickey from Fantasia! and Minnie in one of her fancy red-carpet gowns.

The duo meets separately, and there isn’t an option for FastPass here so the lines can sometimes get long.

Because of that we recommend you check the wait times (either in person or via the My Disney Experience app) before you get in line.