Jack and Sally are eerily adorable and super fun, and if you love meeting characters, these two are definitely some you’ll need to add to your bucket list.

The bad news is they don’t meet year-round, but you can meet Jack and Sally at Disney World from about mid-August through mid-December.

Here’s what you need to know…

Get ready to party

Attending one of the parties is the only way to meet Jack and Sally at Disney World.

Mickey’s Not-So-Scary Halloween Party is one of the most popular of all the premium events you can attend at Magic Kingdom.

Held several times each week between mid-August and the end of October (and sometimes even until November 1), this fun (and family-friendly) party celebrates all things Halloween, in a not-so-scary way.

The party includes all sorts of cool stuff like special entertainment and firework shows, themed food, trick-or-treating, and even characters you can’t find anywhere else.

All of this comes at a cost, however.

Advanced ticket prices for MNSSHP start at $79 and go up to $115 depending on the day.

If you wait until the day of to buy a ticket (which we generally don’t recommend) you’ll pay $10 more per ticket. 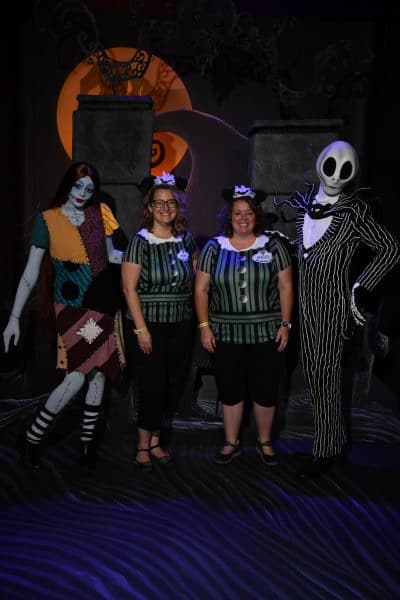 From the beginning of November up through the week before Christmas, several times of the week Magic Kingdom is transformed into a holiday wonderland complete with festive decorations, fun seasonal entertainment offerings, exclusive fireworks and stage shows, and even cups of hot cocoa and cookies.

Tickets for Mickey’s Very Merry Christmas Party start at $99 and go up $139 per ticket, and like with the Halloween Party, if you wait to buy your ticket the day of the event you’ll pay $10 more per ticket. 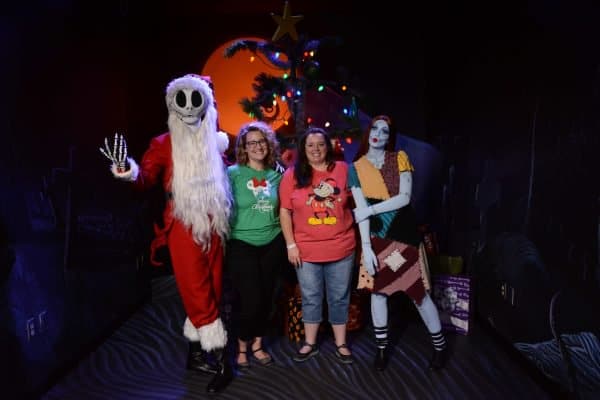 Where do Jack and Sally meet?

Jack and Sally greet guests at the front of the park inside Town Square Theater (at the spot where Tink usually meets). 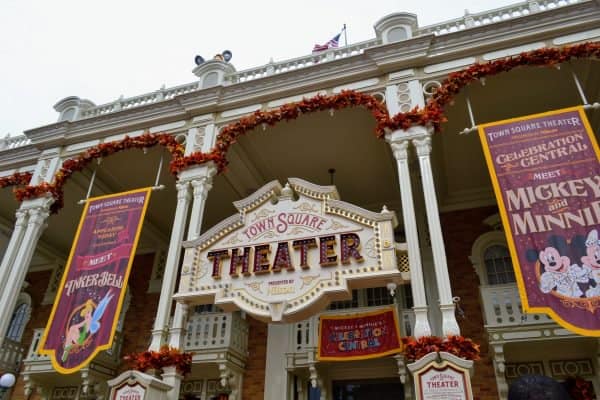 What’s the best time to visit?

Even though the parties don’t start until 7 p.m., your ticket will get you in starting at 4 p.m. (and DVC owners and guests can get in starting at 2 p.m.!).

And, although things don’t officially kick off until that 7 p.m. start time the most popular characters will start meeting earlier.

In Jack and Sally’s case, they typically start meeting around 4:30 p.m.

For the shortest waits, we recommend you line up for them as close to 4 p.m. as you can so that you are at the front of their line.

If you do that you’ll be able to head over to line up to see another one of the more popular characters (like the Seven Dwarfs or Moana) before the rest of the party even starts.

That way you can focus the actual party time on some of the other characters and experiences instead of spending it standing in line.

Important note: before you can get in line you’ll need to make sure you get your party wristband. You can do that at the front of the park (if you are entering around 4 p.m.) or there are wristband stations inside the park where you’ll be able to get one. 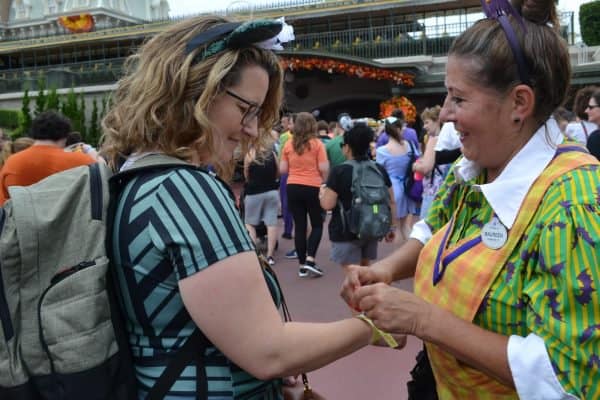 Can’t make it before the party starts?

Because the line can get cut off before the party ends, we don’t recommend you wait until any later than about 11:15 p.m. to do that. Expect your wait around that time to be about an hour.

Because the line for these characters can be so long (which eats up valuable party time), we don’t recommend you line up outside the recommend times above.

Plan to try to meet Moana, Jack and Sally and the Seven Dwarfs in one night?

If your plan is to meet these 3 popular characters you’ll need to be more strategic and you’ll probably need to make some sacrifices.

It is possible, but it may require you to miss either the parade or fireworks.

But, if you don’t mind that we recommend you start by lining up for the Seven Dwarfs around 5 p.m., meet them and then focus the next few hours on other characters or party-related activities.

Meet Moana during the 1st parade or the fireworks and then get in line for Jack and Sally no later than 11:15 p.m.

Tips for meeting Jack and Sally

How to meet other characters