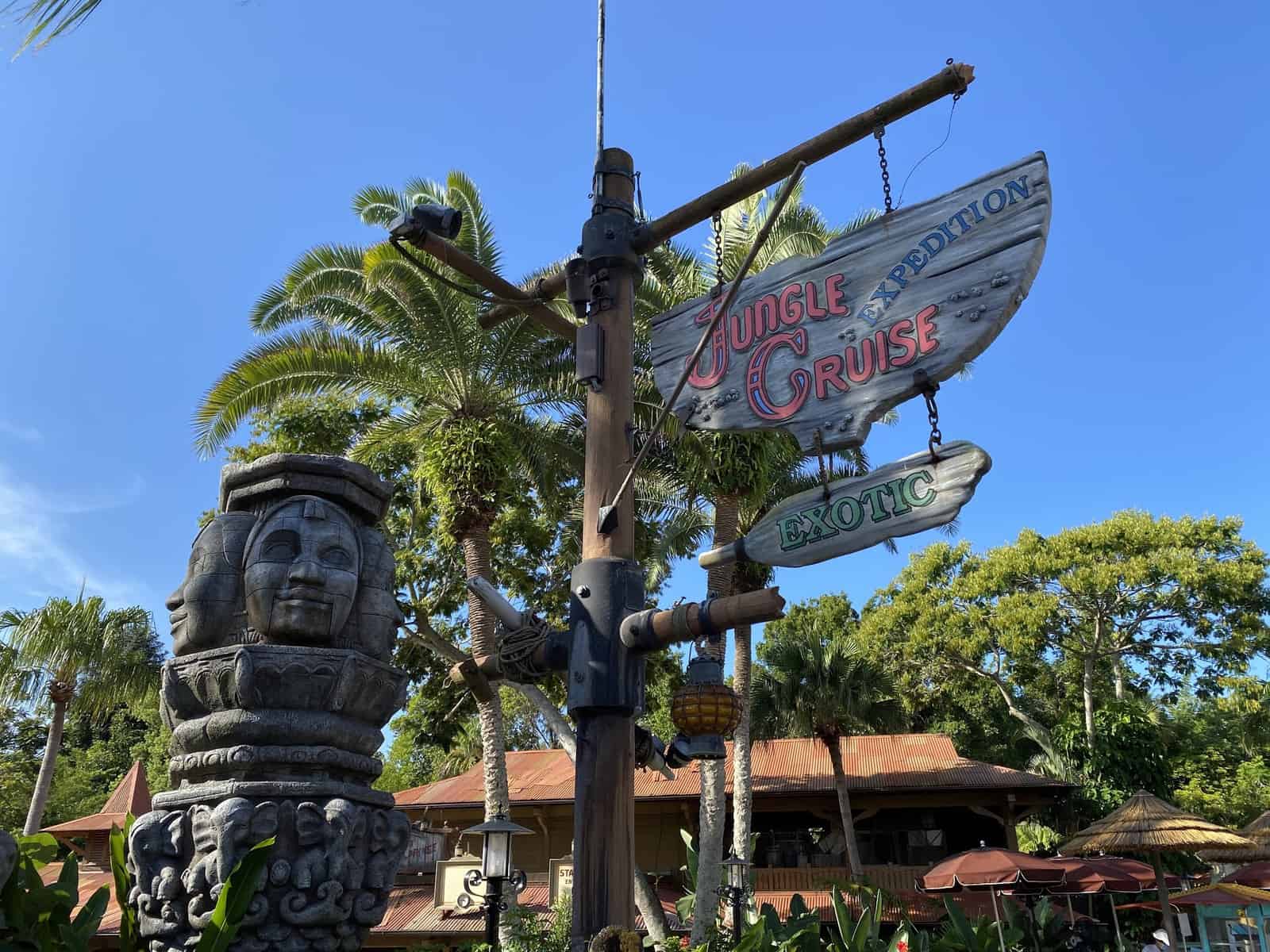 Jungle Cruise is one of several classic attractions that remains at Magic Kingdom in Walt Disney World.

You hop on a boat for a safari adventure led by pun-filled Skippers, who will not only make you laugh, but will show you the eighth wonder of the world — the backside of water!

Everything You Need To Know About Jungle Cruise

You can find Jungle Cruise in Adventureland across from Walt Disney’s Enchanted Tiki Room and The Magic Carpets of Aladdin. Here’s the location on the map.

Rider Switch, the system that allows guests with small children to take turns riding bigger rides, while another person/people wait with the little one, is not offered for Jungle Cruise. There also isn’t a Single Rider Line.

Jungle Cruise first opened in 1971 during Magic Kingdom’s opening day. It was also an original opening day attraction at Disneyland Park in 1955.

Before becoming known for its laughs and jokes, the attraction as a whole was initially more of a serious one with only a few jokes.

The original script for Disneyland was written by Winston Hibler and inspired by Disney’s True-Life Adventure African Lion film. This led to a more serious and educational tone, but that all changed in the ’60s when Imagineer Marc Davis took over and turned the ride into what many know and love today.

During the holidays, Jungle Cruise receives a holiday overlay and becomes the “Jingle Cruise.” It’s mostly the same ride, but the jokes are holiday-themed, there are fun decorations, and more.

Believe it or not, but Jingle Cruise actually hasn’t been around that long — only since 2013!

In January 2021, Disney announced that some much-needed changes are coming to the Jungle Cruise on both coasts.

Some of the enhancements include incorporating an animatronic skipper, new characters, including Alberta Falls, adding new jokes (don’t worry, many of the classics are remaining), and freshening up the story with chimpanzees, new explorers being chased up the pole, and making the Skippers more of a focus.

Here is the concept art shared by Disney:

Most importantly, the outdated depictions and problematic scenes will be removed.

As Walt Disney Imagineering Creative Portfolio Executive Chris Beatty told D23, “This is not a re-envisioning of the entire attraction. It’s the Jungle Cruise you know and love, with the skippers still leading the way, and at the same time, we’re addressing the negative depictions of ‘natives.’”

This also means the removal of Trader Sam from the final scene of the ride. Disney announced in April 2021 that Trader Sam will still be part of the attraction in a unique way.

The final scene will feature a Lost & Found/Gift Shop managed by Trader Sam in place of the Trader Sam animatronic. As stated by Disney, “But, while he’s out lost and finding some new inventory, it’s the animals that get the last laugh!”

Disney hopes to have the updates completed by sometime later in 2021.

The Jungle Cruise queue is completely outdoors, but part of the line is covered. While the ride doesn’t have an interactive queue like many other attractions, there are plenty of sights and sounds to enjoy.

Jungle Cruise’s boats are slow-moving and don’t have any fast turns, so motion sickness seems very unlikely. That said, we do have a guide on motion sickness that’s filled with information and tips, so feel free to check that out.

The ride vehicles for Jungle Cruise are small boats. There is seating around the entire interior of the boat for guests to sit.

You will ride in the boat with other groups, but your party will always be seated together — or at least near one another.

You are not strapped in or anything like that, but simply sit down and ride around inside the boat.

Overall, Jungle Cruise is kid-friendly. But, keep in mind some of the animals may scare little ones. There’s also one scene in which the boat rides through a dark cave that could be scary for children.

Anyone riding with kids may want to tell them that the animals aren’t real prior to riding.

We also have a full guide on several other things that might scare little ones at WDW.

You can go on the Jungle Cruise in the video below — and get a good laugh in the process.