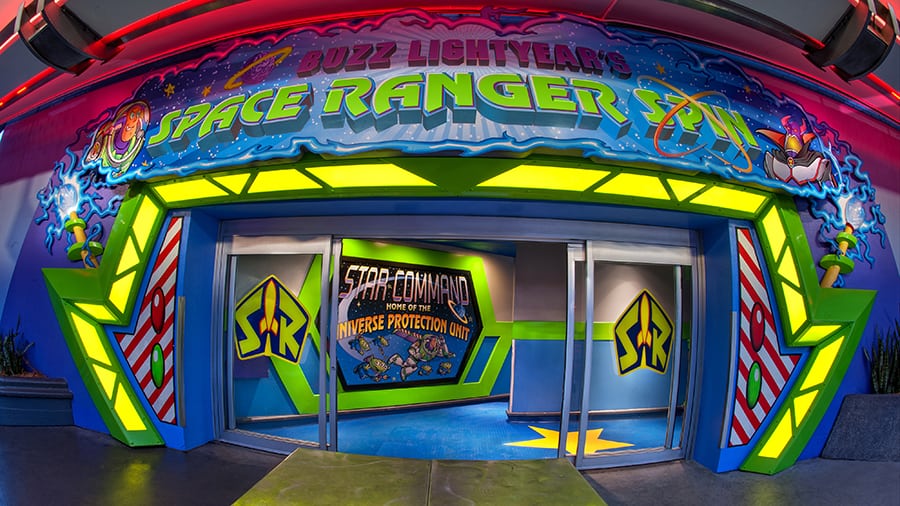 While blasting targets, not only do you earn points, but you’ll become a Junior Space Ranger and maybe even a Galactic Hero, if you’re lucky.

Everything You Need To Know About Buzz Lightyear

You can find Buzz Lightyear on the right-hand side as you walk into Tomorrowland from the main Hub. Here’s the location on the map.

Following the massive success of Pixar’s Toy Story in 1995, Buzz Lightyear opened in 1998 at Magic Kingdom.

As detailed by Undercover Tourist, before becoming an attraction dedicated to the beloved space ranger, If You Had Wings was housed inside the same building starting in 1972 using the Omnimover ride system just like Haunted Mansion, Spaceship Earth, and more.

Initially, the ride was sponsored by Eastern Airlines and guests were able to experience the different cities that airline flew to, like Bermuda, Puerto Rico, and New Orleans.

But, when the ride switched to sponsorship by Delta in 1987, the attraction’s name changed to If You Could Fly. This attraction closed its doors in 1989.

The queue for Buzz Lightyear is mainly indoors, but when there are longer waits, the line extends outside of the buidling.

The interior queue is themed to the ride and Buzz Lightyear’s Star Command. There also isn’t any type of interactive queue.

There’s a brief section where you go through a simulated star tunnel. You may want to close your eyes here. There’s also a joystick that spins the car. If needed, we have a guide on motion sickness that’s filled with information and tips.

Each ride vehicle can fit at least 2 to 3 guests, depending if you have littles one with you. Keep in mind that there are only two laser cannons and two score-keeping displays in each car. There’s one pull-down lap bar for all riders.

Buzz Lightyear is kid-friendly, but the overall darkness may bother some little ones. We have a full guide on several other things that might scare little ones at WDW.

Your photo is taken on Buzz Lightyear, but not until the end of the ride. Pay attention to the room with the giant Emperor Zurg, because the camera is on him!

When you ride with a MagicBand and a linked Memory Maker entitlement, your photo will automatically be uploaded to your My Disney Experience account. The same can be said if you’re a WDW Annual Passholder.

Be sure to read more on PhotoPass and how Memory Maker works.

At the end of the ride, there’s also a touch point for those without a MagicBand to tap their park ticket or Memory Maker card. Your photo will then be added to your account.

It’s not as fun as earning points on the actual ride, but here’s a ride-through video of Buzz Lightyear.