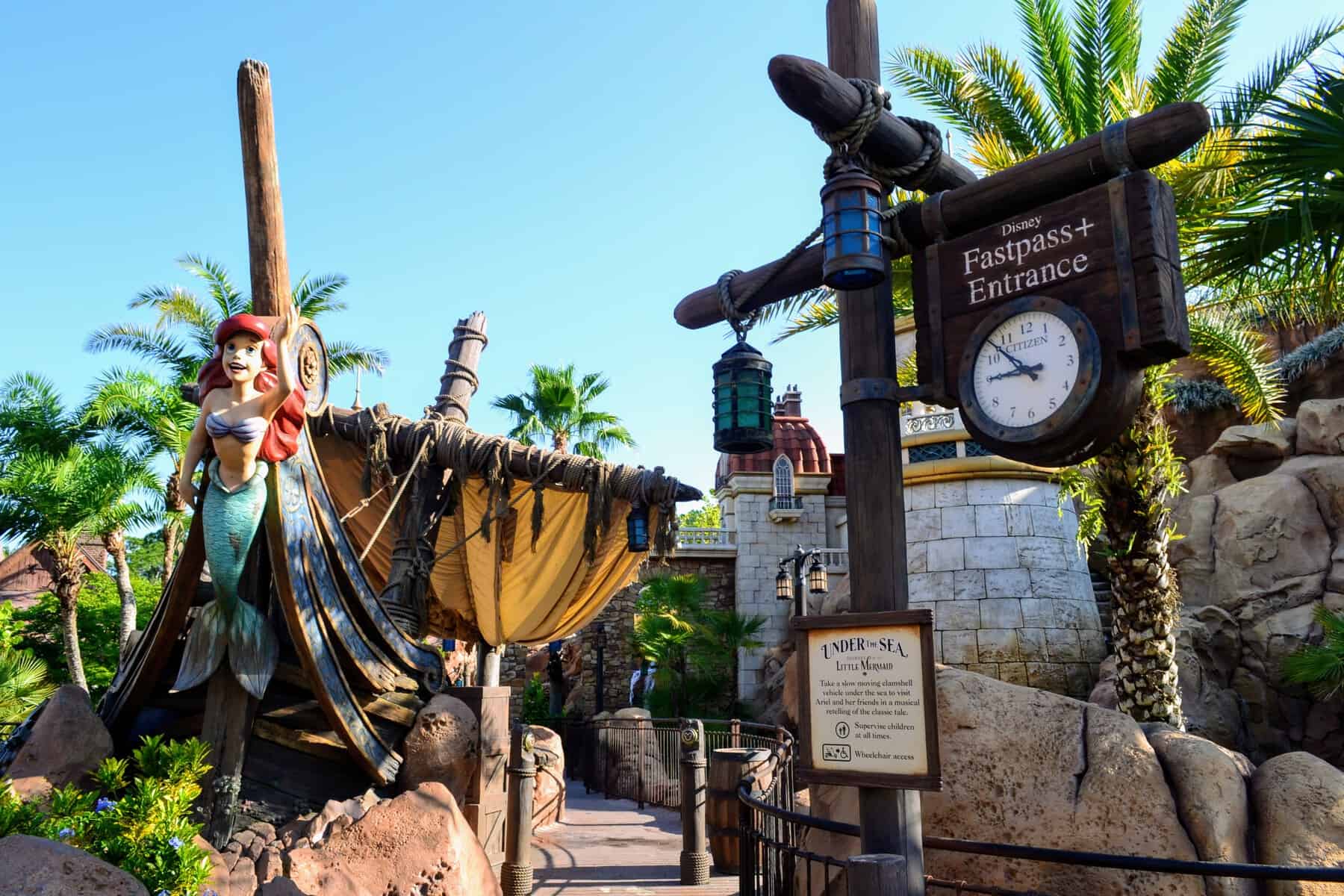 Most people visiting Walt Disney World will head to Magic Kingdom at least once during their visit so having a solid FastPass strategy is important if you want to ride all of the best-of-the-best attractions this park has to offer.

Every guest that visits will start off with the ability to make 3 advanced FastPass+ reservations per day and which ones you select can make a huge difference on how smoothly your day goes.

FastPass+ (at Walt Disney World) and FastPass (at Disneyland) have been discontinued. A new system, called Disney Genie (free) and Disney Genie+ (pay-to-use) will debut later this year at both parks.

The Disney FastPass+ service is kind of like an advanced reservation system for attractions. My Disney Experience (either the app or online) allows you to pre-select 3 attractions that are a priority for you to see and experience.

Each selection will provide you with a 1-hour return window to ride via the FastPass+ line (instead of the typically way longer Standby line).

So, while you don’t really skip the entire line, your waits using FastPass are greatly reduced – which is especially important for popular attractions.

You receive 3 free FastPasses for each day of your ticket, however, how far in advance you can select your attractions differs.

The number of available FastPasses for each attraction is limited, which means the earlier you book yours the better your chances will be in securing what you want.

If you are new to making FastPass+ reservations we highly recommend you check out how to use FastPass+ at Disney World to learn more.

These are the attractions that offer FastPass+ at Magic Kingdom.

FYI – these are priorities, not tiers. FastPass+ isn’t tiered at Magic Kingdom.

Best choice if height requirements are not a factor

This is the most popular attraction in all of Magic Kingdom so if you want to ride it with the least amount of stress, this should be your top priority when choosing your Magic Kingdom FastPasses.

Long lines form here immediately at park opening and remain throughout the day.

If you can’t get a FastPass+ here, for the shortest waits you’ll want to arrive to the gates of Magic Kingdom 45 minutes to 1 hour before park opening and then line up on the bridge to the right of castle.

Best choice if height requirements are a factor

Peter Pan’s Flight is one of the most iconic attractions in all of Magic Kingdom, making it wildly popular with guests.

It’s cute and nostalgic and notorious for the extremely. slow. loading. process.

The line may not look long, but trust the posted wait sign out front. Just like with Seven Dwarfs Mine Train, a long line will form here very early and will remain until late in the evening.

Looking for a good use of a FastPass on a attraction with no height requirement? This is your best bet.

Space Mountain is another good option for use of FastPass+.

This is a rough one, though – so if you’re prone to motion sickness or just prefer to keep your dental fillings in your teeth, you may want to skip it.

(Just kidding … it won’t knock your fillings out BUT it is pretty rough. You’ve been warned.)

Big Thunder Mountain Railroad is another great use of FastPass+.

Not only will it see long lines throughout the day, the queue for this attraction, while covered, is notoriously hot so doing whatever you can to avoid standing in the long Standby Line is a good thing.

Splash Mountain is the last of our top recommendations with height requirements.

It is a fun attraction, and a lovely journey. BUT – you will get wet on this one. Trust us.

No character is more iconic than Mickey Mouse and the close proximity of this character meet to the front of the park gives it a double whammy.

If meeting Mickey at this location is a priority for you, definitely use a FastPass+ on it.

Again, although it may seem counter intuitive to use a FastPass for meeting characters, this combo is extremely popular so if you really want to meet them, make sure you get a FastPass+.

Planning to visit Bibbidi Bobbidi Boutique? You’ll probably want to snag a FastPass for the princesses, too.

What about the other parks?

Looking for FastPass strategies for the other parks?

Check out the posts below:

You start with 3, but you can get more

Everybody starts with 3 FastPasses, but you can get additional FastPasses (one-at-a-time)  as soon as you use your 3rd FastPass.

Here’s how that works:

Some characters are just so popular that if you really want to meet them without a long line you’ll need to either plan to use a FastPass+ for them OR opt to visit at Rope Drop.

So, if you are traveling with somebody that has a character they really want to meet AND that character offers FastPass+, using it as an option makes sense.

If you really want to see and do all of the best-of-the-best attractions, you’ll have to pair Rope Drop with solid FastPass+ planning.

That means you’ll need to arrive to the front of the park no later than 45 minutes before opening (and we recommend even earlier during busy times of the year like the holidays).

To get the maximum amount of stuff done, pair early arrival with our Magic Kingdom touring plans.

When hours are extended, more FastPasses typically open up

Disney publishes their park hours about 180 days out, but the closer you get to your travel dates the higher the likelihood they’ll tweak those hours by opening earlier or staying open later (or sometimes both!).

When that happens, additional FastPasses open up for those new hours, which means if you missed out on something you really wanted before you may be able to snag it then.

If you don’t get what you want, keep trying

Some FastPasses are just hard-to-get, so you may not be able to get exactly what you want (at the time you want).

If that sounds like your situation make sure you check out our tips for how to get difficult FastPass+ reservations.

When picking your FastPasses, if you have little ones make sure you keep an eye out for height requirements and read up on how Rider Switch works at Magic Kingdom.

Have Magic Kingdom FastPass+ questions? We’ve got answers! Here’s some of the most common questions we hear:

After the park opens, plan to ride several things in the first couple of hours without FastPass+, make use of FastPass+ for late morning/early afternoon, and then get additional FastPass+ reservations for later in the day, if needed.

Does Magic Kingdom have FastPass tiers?

No. Unlike Animal Kingdom, Epcot, and Hollywood Studios (all of which utilize a tier system or restrict FastPass selections), there are no FastPass tiers at Magic Kingdom.

How much does FastPass+ cost?

There are ways to purchase additional FastPasses, though. But, every ticket is eligible to book (in advance) 3 free FastPasses per ticket day.

Can I use FastPass+ during Extra Magic Hours?

FastPasses are not available during Extra Magic Hours.

How far in advance can I book Fastpasses?

Guests staying at a Walt Disney World resort as well as some select offsite locations can book their FastPasses 60 days in advance.

Everybody else can book FastPasses at 30 days out.

Annual Passholders without a resort reservation can book at 30 days out, too.

Can I get a FastPass for Mickey’s Not-So-Scary Halloween Party?

FastPasses aren’t available for attractions once the party officially begins at 7:00 p.m. However, sometimes you can get FastPasses for 4:00-7:00 (using just your party ticket) if you plan to arrive in that time-frame.

The key is to 1.) make FastPass+ reservations for your non-party days first and 2.) you cannot have FastPasses booked earlier in the day with a regular park ticket.

Note: in previous years, some guests have reported receiving emails from Disney notifying them that they were over their FastPass+ allowance and that their selections for their last park day would be deleted.

Do I need a FastPass for everybody in my party?

Every person that plans to enter the FastPass+ line needs to have a FastPass.

We get this question a lot in regards to FastPasses for characters.

Even if you’re just going along with your child so they can meet Mickey Mouse, you’ll still need to have a FastPass to enter the line with them.

What happens if an attraction breaks down during my FastPass window?

If an attraction breaks down or if weather closes an attraction during your FastPass+ window you’ll receive a push notification in the My Disney Experience App.

Typically you’ll receive another FastPass that you’ll be able to use at any (or nearly any) attraction for the remainder of the day.

You wont have to make a new reservation and there wont be a return window – you just pick an attraction and scan your MagicBand or ticket when you get there.

FastPass+ suggestions to save to your phone