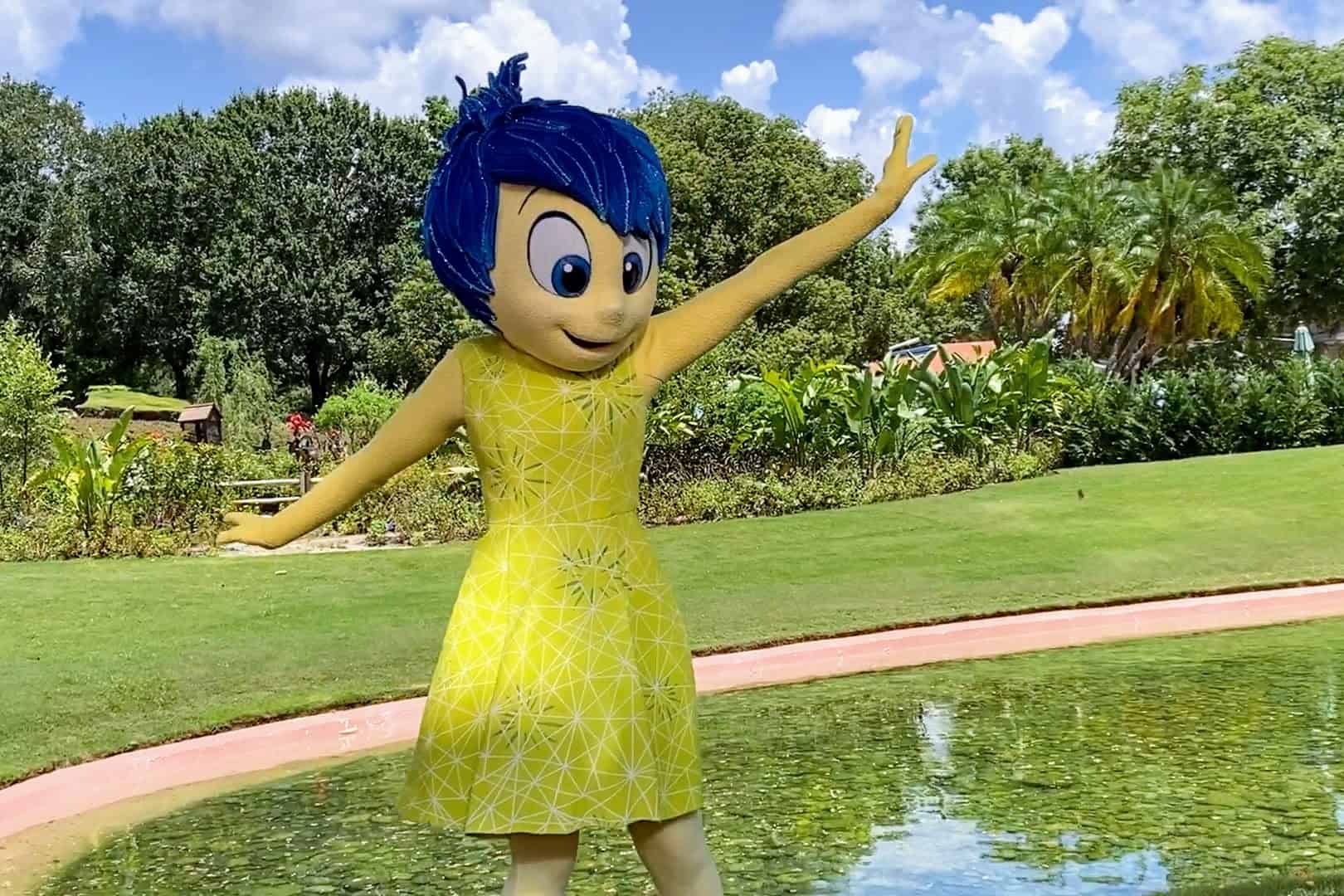 For most people, a visit to a Disney park includes a character interaction of some sort, whether that be a traditional meet or greet, a character meal, or watching one of the fun parades and shows in the parks.

But things are different, at least for right now.

Here’s everything you need to know about Disney World characters and cavalcades.

Can you still meet characters at Disney World?

If you’re heading to Disney World right now, you probably already know that lots of things are looking different. Masks are required, physical distancing is enforced, and crowds are kept low.

But what about the characters?

You can still see some of the characters out and about, but for safety – you can’t actually meet them.

While that may sound un-magical, we found it totally the opposite.

Stumbling upon characters with their full personalities on display added a giant dash of pixie dust and energy to the parks, something we truly appreciated on our visits.

What is a cavalcade?

The first thing to know is that right now, there are no parades or nighttime shows.

Not ideal, but also totally understandable considering that the goal is to maximize safety by minimizing opportunities for guests to congregate in small areas.

But, don’t despair too long because while the parades are gone, Disney has found ways to bring the characters out without jeopardizing safety. And one of those ways is through the use of cavalcades.

Cavalcades are kind of like a mini parade. They typically have 1 float and some characters or Cast Members on foot or horseback.

And we love them.

Parades are great – don’t get us wrong – but if you’ve stood around and waited for the 3 p.m. parade in July you know why they are not ideal.

For a majority of the year 3 p.m. is hot and humid. And for the most part, the spots to watch the parade have limited to no shade.

It is the perfect storm for epic meltdowns to happen (and we mean with the kids too, not just the adults).

When you spend all that money for a ticket it is natural to want to see and do as much as you can while you’re in the parks – something we absolutely understand. And lots and lots of people just love the parades.

But we think there’s a good chance you’ll love the cavalcades as much – if not more.

Cavalcades just feel more magical. Yes that sounds cheesy but we think it is true, and here’s why:

How do you know one is coming?

Just like with a parade, music is your cue (at least for most of the cavalcades).

Before you’ll be able to see a cavalcade you’ll likely be able to hear it.

For others, there really is no advanced warning – which makes stumbling upon them that much more special.

Characters in the parks

In addition to cavalcades, Disney has also introduced some fun character sighting opportunities into the parks.

Now, these characters aren’t available for meet and greets – and you can’t get within 6 feet of them, but we find them absolutely adorable.

Winnie the Pooh chasing butterflies? The Step Sisters heckling guests from the castle? Joy pretending to mow the grass?

That is the kind of character fun we are here for!

Where to find characters in the parks

Cavalcades and character spotting opportunities aren’t scheduled but they do occur in regular locations. Check out the guides below for info on where you can find them in each park.

Character meals have long been another favorite for Disney World visitors.

We loved them, too – it was always an easy way to see a bunch of characters without standing in line.

But just like everything else at Walt Disney World, right now character meals are going to look a little bit different.

And, many (not all, but many) character meals were also buffets – which for safety precautions have been suspended for the time being.

Even though your options for character meals is greatly reduced, that doesn’t mean that they are non-existent.

In fact, you currently have several choices for character meals:

As we said, characters aren’t able to visit your table for hugs and autographs, but they are there…just from a distance.

Instead of having Mickey coming to your table you can expect to see characters roaming about (in an organized fashion, of course).

Some of the room set-ups are better than others, so if you’re trying to decide which one(s) to book for your next trip be sure to check out the links above.

Looking for a schedule of character times? There isn’t one.

No schedule may sound like a nightmare but we kind of liked being forced to go with the flow.

No schedule means you don’t have to stress about being somewhere at a specific time.

And – these cavalcades don’t happen just once per day (as was often the case for the parades at Magic Kingdom). Instead, they are repeated several times throughout the entire day.

You can find a shady spot with lots of space around you while you sit and relax and wait for the fun to stroll past.

Or, you can stumble upon one as you move through the park.

Both options allow for a lot more flexibility in your day, something we appreciated way more than we expected.

Unfortunately, for the time being characters aren’t able sign autographs. This includes both in the parks and at character meals.

Some of the meals where characters traditionally signed autographs do have souvenir postcards available for guests to take with them.

But other than that, autograph signing has been suspended.

Can you take photos with the characters?

If you want to get a picture with a character right now, you’re gonna have to take a selfie.

It isn’t the ideal situation but that doesn’t mean the photos aren’t going to be cute.

Whenever possible, the characters are happy to pause to give you a chance to snap that classic selfie pose.