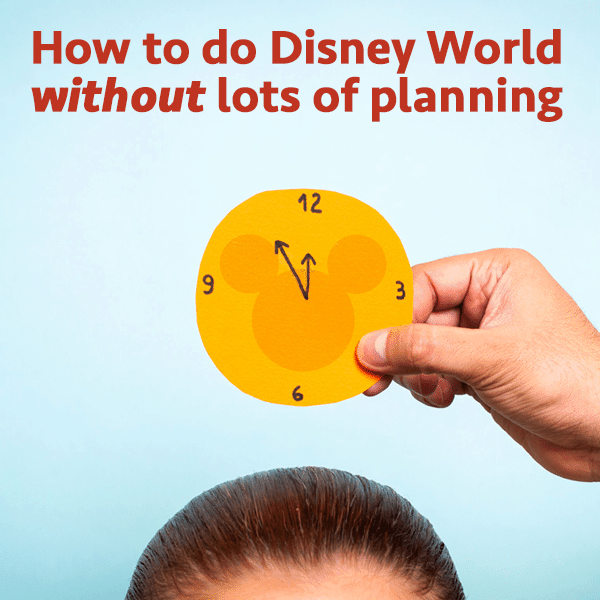 Is it possible to do Disney World without planning months ahead of time? With reasonable expectations, it can be done and I have advice on how to do that today.

I also have recent news and a quick tip about doing laundry at Disney World resorts.

Disney World without lots of planning

Doing Disney World without planning months in advance is possible if you don’t expect to do some of the hardest-to-get things (like eat at Cinderella’s Royal Table or Be Our Guest), but will be easier to do during less busy times (see my crowd predictions for 2015 and 2016).

Dining options
Many character meals book up months in advance, but you can often find last-minute reservations at 1900 Park Fare (at The Grand Floridian), Crystal Palace (at Magic Kingdom), Garden Grill (at Epcot), and Tusker House (at Animal Kingdom). See my character meal overview for details on each.

There are other Table Service options throughout Disney World that often have last-minute openings:

You could also choose to just eat Quick Service which doesn’t require reservations. At Animal Kingdom, I like Yak & Yeti, Tamu Tamu, and Flame Tree (and Restaurantosaurus is a good option if you want to eat inside with free drink refills). At Magic Kingdom, I like Columbia Harbour House. Epcot has many great Quick Service options, including fish and chips in the U.K. section and Sunshine Seasons inside The Land building.

My recommendations for each park:

People staying at Disney World resorts and wanting do to laundry can use the Laundry View site to check the current availability of washers and dryers by going to LaundryView.com/DisneyWorld.

Oh my gosh!!! This post is so fantastic!! I am not a planner. Not even close. We decided about 2 months ago to try to go to Disney for the first time in May- everything kind of fell in place and we are leaving Thursday! Every other site I looked at had me booking things 6 months in advance- which about makes my palms sweat booking that far in advance! Haha! These ideas are so awesome and just what I like, short and sweet!! Great information here! I also subscribed to your emails! Looking forward to them!

Just booked a quick weekend trip for Memorial day (yikes). Got the three mountains at MK for afternoon fastpasses, but no BoG reservations available. Also got reservations for dinner one night at DTD. We're holding out for a last minute reservation becoming available at BoG or just getting in line for an early or late lunch.

I just booked a lunch reservation at BoG for the Sunday before Memorial Day!

I had a reservation at All Star Movies for the end of September. When free dining was announced, I did try to go online to change my reservation with no luck. I also waited on hold for almost 1 1/2 hrs to change my reservations and was told that there were no value or moderate resort rooms available for the promotion. I was disappointed, but determined and thought that I would just keep trying. I got up early Tuesday morning for work and got online a few minutes before 5am (EST) and was able to get a room at Royal Guest Room at Port Orleans Riverside with the free dining. Since our plan was to upgrade to moderate anyway, it was only slightly more money that we had anticipated, and my 6 yr old daughter is going to LOVE it!!