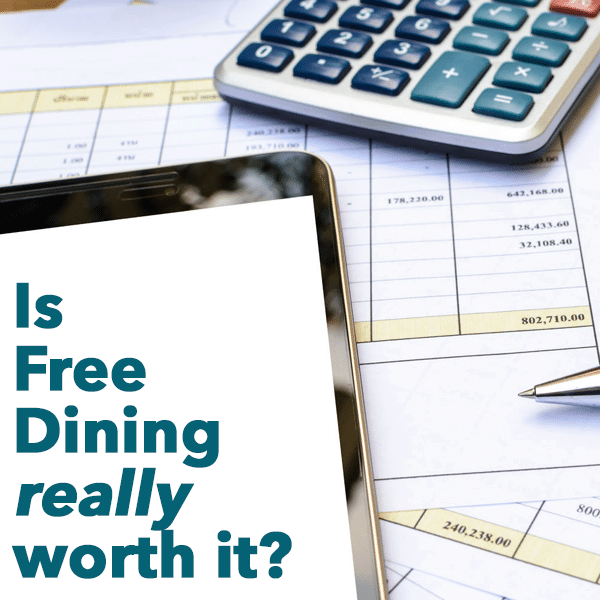 Lots of people get excited about the possibility of Free Dining for their trips, but what if it’s not the best deal? I’ve got info today on who usually saves more by using Free Dining and who doesn’t.

I also have a quick tip about maximizing Extra Magic Hours (including which attractions are open at each park).

Is Free Dining worth it?

In addition, not everybody eats the same amount of food provided on the Disney Dining Plan so paying out-of-pocket and using a room-only discount might make more sense.

For people who do eat the amount of food provided with Disney Dining Plan credits, here’s what promotion usually makes the most sense during times when Free Dining is offered:

If Free Dining is announced, be sure to listen to my podcast about preparing for Free Dining and check out my charts on maximizing Disney Dining Plan credits.

Here’s what’s open during AM and PM EMH. Pin it or save to your phone to have as a reference later.

How easy are RO discounts to get? Are they limited like the FD discounts? I have currently have two reservations - one w FD in a more expensive room and one without FD in a cheaper room. I'm leaning toward keeping the reservation w/o FD, dropping the DDP and trying for a RO discount in July. I just don't want end up unable to get the RO discount after this morning's disappointment.

Hi! You mentioned that the meals sometimes include tons of food. When you are on the dining plan do you get to take leftovers back with you?

Thanks for the tips! I wanted to add that when you think about how your family eats, also consider whether you like to order appetizers and alcoholic drinks at sit-down restaurants. Those aren't included in the cost of the regular dining plan. Tips aren't included either (whatever you order).

You can still share while using the dining plan (except for buffets/character meals I think). This is a stategy we use to do a two credit meal, then share some other meals to make up for that extra credit used. Also, quick service meals are not allocated between child/adult meals. So if you have a child who doesn't eat much (or any it sometimes seems!), get an adult meal for that quick service to share with your child. This also generates extra credits which can be used for more meals. Essentially subbing some quick service for table service and saving table sevice credits to do a two credit meal or two.

Little Mermaid discounts have never been part of a promotion. They're popular and don't need a discount to get people to stay there.