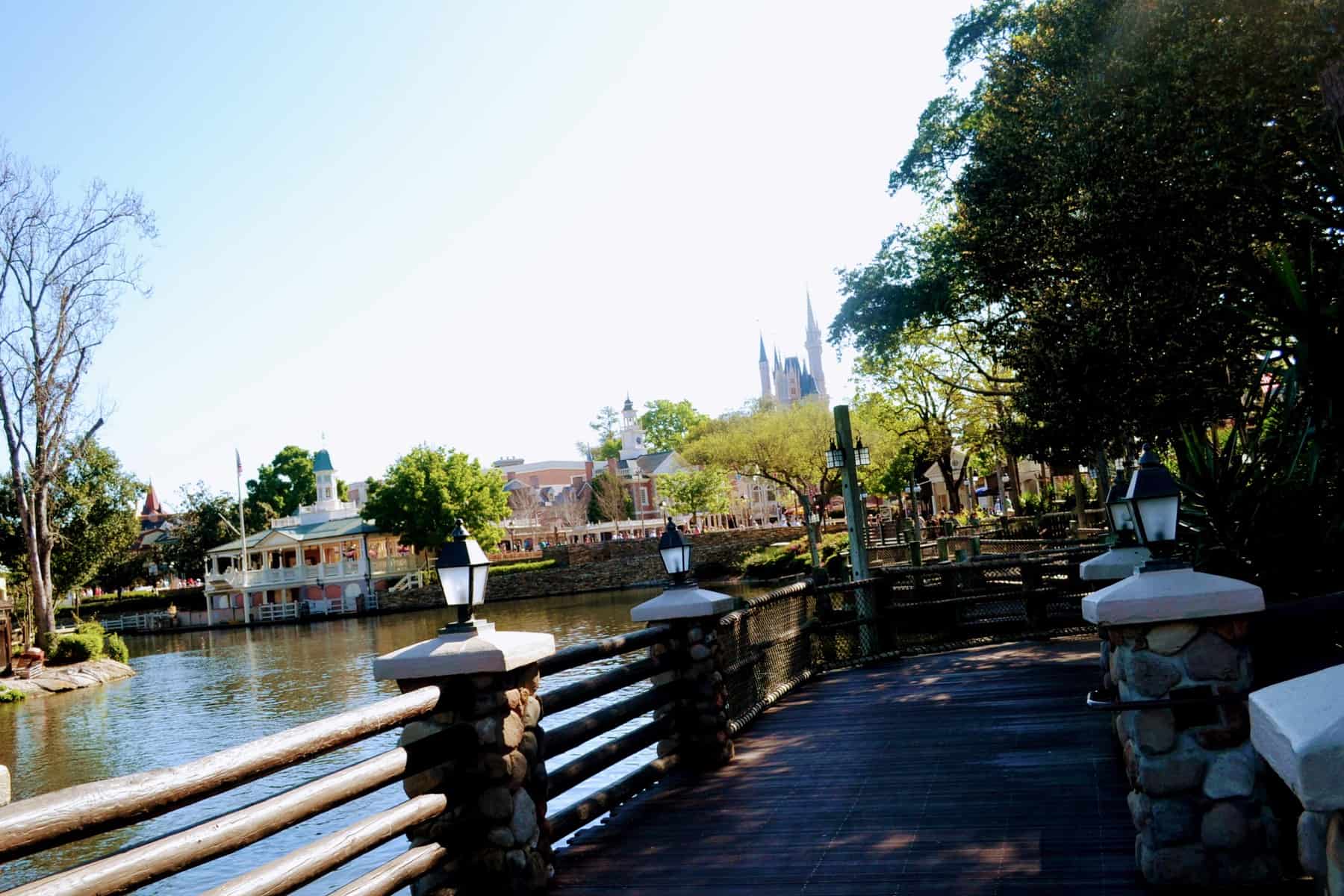 With the size of Disney World, it’s not surprising that there are paths inside each park (and even between the parks) that can help you get from point A to point B a little bit easier.

Not only do these routes help you save a few steps, some of these shortcut paths at Disney World will also help you avoid crowds.

Whether you are a first-time visitor or a WDW veteran, here are a few shortcuts that you might find helpful during your next trip…

One of the least known shortcut paths at Disney World, this path connects the Fantasyland train station and Space Mountain and is a favorite path to cut down on some walking.

Since the train doesn’t stop in Tomorrowland, this is a handy way to get from Fantasyland to Tomorrowland if you do take the train.

FYI: part of this path is a designated smoking area.

In the Magic Kingdom touring plans, we frequently suggest going from Haunted Mansion to Splash Mountain, and you can go along the waterfront path on the water to do that.

Not only is it usually less crowded, but it’s also scenic and mostly shaded, making it a nicer route to get over there. This path is also a good option during the parades since they’ll have the main pathways roped off.

You can cut between Adventureland and Frontierland halfway in-between the two using a couple of different paths, which can save you a lot of steps if you’re wanting to move between these areas.

One of the paths looks like a solid building on the guide maps, but there’s a pathway you can take. This is not only a time (and step) saver but you’ll also find restrooms along the way.

When going between Tomorrowland and Main Street, you can avoid the busy hub by cutting through the Tomorrowland Terrace restaurant area, which is also a nice break from the sun since it’s a mostly covered path.

Main Street can become quite congested and hard to navigate during parades; however, you can cut between the Hub and the area down by the Main Street train station by walking through the stores on the left-hand side (as you face Cinderella Castle). The stores on that side are all interconnected, and while it will still be crowded, it can be easier than trying to navigate a crowded sidewalk during a parade.

In addition, using the stores as a cut-through is also a great way to get out of the weather and into some air conditioning, even if only for a little bit.

During busy times of the year, Magic Kingdom will often open up an alternate path located behind the shops on the right-hand side of Main Street (as you face Cinderella Castle). This path bypasses Main Street entirely and is a much less congested way to exit, albeit a slightly less “magical” way, as well.

The Odyssey building at Epcot used to be an attraction and it’s now only occasionally used for special things. The pathway that goes by it is great for getting between Test Track and the World Showcase (plus there are nice bathrooms along the way that usually aren’t very busy).

Epcot path between The Land (& Soarin’) and Canada

While not as lightly traveled as the Odyssey path, the sidewalk between The Land pavilion (where Soarin’ is located) and The World Showcase (on the side where Canada is located) can save a lot of steps if you are headed between those 2 areas.

Most people tend to tour Animal Kingdom in a circular manner by going from Africa to Asia to Dinoland (or the reverse), but there’s a path right through the middle that can save some time, especially if you’re going to It’s Tough to be a Bug or want to see the Tree of Life up close.

If you’re entering on the side by It’s Tough to be a Bug, you’re basically entering the exit for that attraction, and then you’ll have to find the opening that goes past the exit doors that takes you over to the other side. Beautiful path and lots of opportunities to take pics.

Other shortcut paths at Disney World

Sometimes when you are visiting Epcot, depending on where you are headed it can be faster to make your exit out of the International Gateway and then catch a bus or a taxi/Uber from one of the nearby resorts like the Beach Club or Boardwalk. If you’re hopping between Epcot and Hollywood Studios and don’t mind a bit of a walk, you can easily do that, too, by following the path below.

Walking path from the Contemporary to Magic Kingdom

Have questions about these routes? Or do you have other shortcut paths at Disney World you’d suggest? Feel free to leave your thoughts in the comments.