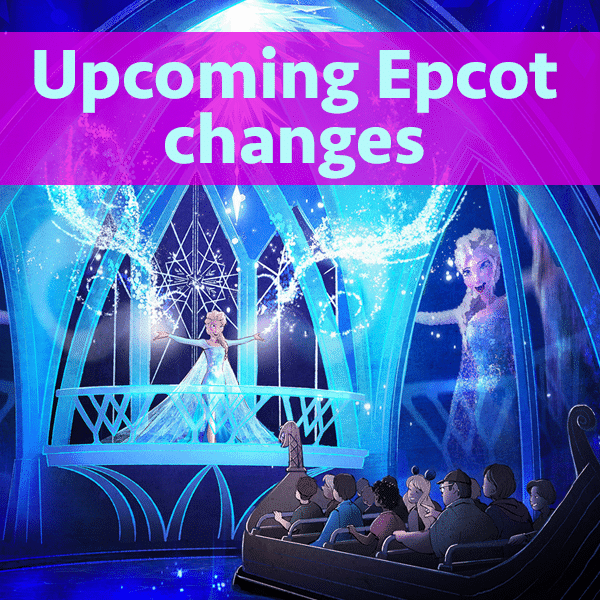 Epcot’s undergoing lots of changes, including the addition of some new attractions. We’ll talk about those today, and how touring Epcot could be affected.

We’ll also discuss recent news and a quick tip to help you get the dining reservation times you want.

These things are coming to Epcot soon:

We’ll have to see what the ride tiers end up being, but generally you’ll want to ride a popular ride at rope drop, and then ride other popular rides later using FastPass+. Starting at Frozen Ever After and working around Future World might make the most sense.

To increase your chances of getting the dining reservation times you want, select a time and not a meal when making your reservation. If staying onsite and unable to book for whole trip, log out and back in. If that doesn’t work, call.

It is recommended here to visit the new Frozen attraction in Norway at rope drop. Does that mean they will be opening Norway earlier than the rest of Worldcase? Doesn't World Showcase usually open 1 hour later than Future World?

I listened to your podcast yesterday. I was able to make our fastpass reservations (we are staying on site) after midnight. I didn't get them done until 5 am. :( I knew that Anna and Elsa wouldn't be available b/c I'd heard you say they were closed for their move. But, Rapunzel and Cinderella weren't available either for either of our MK days. Do you think they were all gone that fast? I didn't think I'd have to rush that much for Rapunzel and Cinderella.

I was just wondering about the news of Anna and Elsa not offering fast passes in June. Is this a for sure thing? We are going the first week of June and while a Disney rep told me that Anna and Elsa would be leaving MK after May 27th, she also said she thought they would make their appearance at Epcot for a meet and greet the very next day, but she was unsure of when fast passes would be available. I have a 4 year old daughter and this is at the top of our list. I have been checking everyday to hopefully find some info about it and this is the first I have seen. Any suggestions? Thanks in advance!

I'm new to the site and I love the podcast, it's a ton of help! I've only ever been to WDW once (when I was 9) and finally, after many years, I'm getting to go back.

I have a request though: can you please post what the podcast date is or the date of the upload is here on the site? Or even say so in the beginning of the cast?

Obviously, I'm in planning and to prep (and psych myself up even more) I plan on listening several times to the various casts, so dates would be a huge help to be able to figure out how up-to-date the information in the cast is. For example, your "phone prep" podcast discusses 3rd party technologies and services, but I have no idea how old that info is and what (if any) are new options are out there since then?

Hi Randall! If Shannon isn't able to get dates added to the podcasts and posts, or not right away, one thing that might help you is to look at the oldest dates on people's comments. Those are pretty accurate for the time frame of the original post. I recommend reading through comments anyway because you can get more info on the topic. Happy planning!

Thanks Shannon! We are in that transition phase with our first ever trip in early June (Epcot June 10). What is the best way to find out when the Tiers change and when we could try for fastpasses for the new attractions?