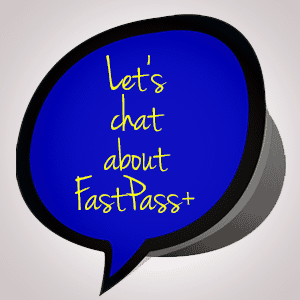 FastPass+ is a super hot topic right now as all of Disney World officially converts from the old legacy FastPass system to the new system as of this week.

Today, I’ll talk about how to use FastPass+ for both on-site and off-site guests.

I also have a quick tip about who should buy Park Hopper tickets.

How to make FastPass+ reservations

On-site guests can make FastPass+ reservations up to 60 days before their trip begins using the My Disney Experience website, the app or at the kiosks in the parks.

Off-site guests can make FastPass+ reservations at kiosks in the parks after arriving. I suggest writing everybody’s names on the tickets so you know who has which reservations. The kiosks don’t print out the reservation info so you will have the option to email it to yourself, write it down, take a picture of the screen or view it in the My Disney Experience app (you can view but not edit).

When you’re making FP+ reservations, the system will give you 3 (even if you only request 1 or 2). After giving you times for each, you can go into individual FastPass+ reservations and edit the times if you’d like.

Epcot and Hollywood Studios only allow you to choose 1 FP+ from the top tier and 2 FP+ from the second tier. Here are the tiers for each park:

Make your FastPass+ reservations for late morning at the earliest and use the first couple of hours to tour without FastPass+.

On-site guests use MagicBands to check in to rides for their FP+ reservations.

Off-site guests use their park ticket to check in for FP+ reservations.

Show up during your reservation window (there’s some leeway on the times but just a few minutes).

One person in your group will scan at the first scanners at an attraction and each person will need to scan at the second scanners.

Rider Switch (sometimes called Child Swap) is still in use so that families with little ones can still ride bigger rides. Read my Rider Switch article for details on how that works.

People staying at Boardwalk/Epcot-area resorts (Beach Club, Yacht Club, Swan, Dolphin and Boardwalk) should think about buying Park Hopper tickets to take advantage of being so close to Epcot. Consider spending the first part of the day at another park and then head over to Epcot in the evenings to eat at a restaurant and explore a few of the countries.

Do you have other questions about using FastPass+?

I'm a new listener but also listening to older podcast episodes of yours. I am going to be an off-site guest. I thought I heard in other podcasts that off-site guests can reserve fastpass+ up to 30 days in advance. I'm just double checking that this is the case currently. I know this podcast is from the beginning of 2014.

Do the FastPass times run out? In other words, since we're staying off-site and will have to wait until we get to the parks to make our FP reservations, will the times that I want possibly be unavailable at some point? I've set up a touring plan based on pre-selected FP rides/times. If those times are not available, that could mess up my plan at the last minute.

A certain number of FP+ reservations are released in the morning for each park, presumably for a variety of times. When you get your FP+ reservations, request them in the order that you'd like them and then you can edit the individual times after the system suggests times for each.

Well done, Shannon. Thank you for calming my fears. I think this is going to be a win/ win all the way around. I'll admit, I was nervous at first. I realize they are some "cons" but -- nice job, Disney.

I have a question. Can you make reservations for another park ? For example, you make it to HS for the rope drop and don't need any FP+ reservations for your day there, but you plan on hopping to Epcot later in the day. You don't want to wait till you are at Epcot to make your reservations because they might all be gone by the time you get there, so can you make all 3 of your EP FP+ reservations while in HS ? Do the kiosks have the capability to do that ?

Really looking forward to your Fastpass+ at Hollywood Studios article. I am very interested in how Star Wars weekends may affect FP+ choices. Thanks for all the great info and tips. They have made planning our first family trip to WDW so much easier.