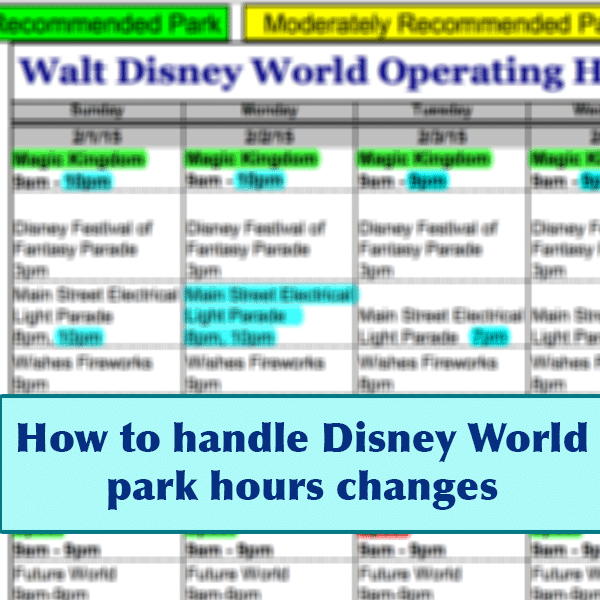 Disney updates park hours frequently which can work out well or really mess up your existing plans.

Today, I’ve got advice on dealing with these changes.

Park hours are published about 6.5 months beforehand. You can get them (plus park hours updates that are made after the initial set is published) by signing up for email alerts on the monthly dashboards.

During your trip, I recommend using the My Disney Experience app to double-check hours as Disney sometimes updates hours at the last minute.

After the initial park hours are published, updates can be made. Here are some ways park hours can change:

Earlier opening times
This is happening much more frequently than it used to and can be a blessing or curse, depending on your situation.

Later closing times
Disney has often extended the closing time of parks if they think the crowds will be heavier than originally anticipated. This can affect you in a couple of ways.

Extra Magic Hour changes
Occasionally Disney will change the Extra Magic Hours which changes which parks I recommend for each day. However, if you have good dining and FastPass+ reservations, I would keep your plans the same. Good touring plans will always be more important than choosing the best park each day.

Michele called in with a quick tip about maximizing your Disney Dining Plan credits. She suggests that when you’re eating at a Quick Service restaurant at a resort, you can take your refillable mug to get your drink there. Since you’re entitled to a drink with your Quick Service meal, you can pick up a bottle of water that you can use at another time during your trip.

Great tip, Michelle! Regarding that, when we eat dinner at the resort on the dining plan we often get a baked good (muffin, coffee cake, etc) as our dessert and a milk or juice as our drink. Voila! Breakfast for the next day and no line to stand in.

I had this same situation happen to me we are going to to Hollywood Studios April 11th and have reservations for Chief Mickey at 7:15am which when I booked in October I figured would be early enough for a 8am or 9am opening then surprise last month they change the time for Hollywood Studios to open at 7am. I just threw my hands up cause I definitely won't give up my early reservations for Chief Mickey but I guess I will just have to be late (in my opinion) oh well can't miss those Mickey Waffles ya know!!!