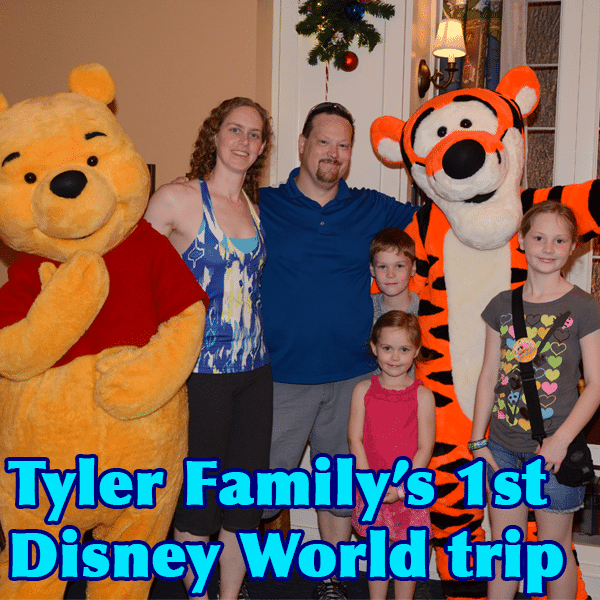 John and his wife decided to take their 3 kids to Disney World and while Becky was excited, John wasn’t sure what the fuss was about.

Today you’ll hear about the plans they made, how they managed to ride many popular rides 4 times, which character meet their daughter described as “a dream come true” and find out if John has changed from a curmudgeon to a fan.

I also have a quick tip about how to save a few dollars by purchasing park tickets now instead of later.

Tyler Family’s before and after

Hear how John and Becky surprised their kids with an early December trip to Disney World, complete with a stay in an Art of Animation suite, special events planned for each child and Mickey’s Very Merry Christmas Party.

Disney park tickets often go up in price once or twice per year. To save, you can buy them now to use later and pay the lower rate.

I know this is an older podcast, but so glad I listened. I am the "curmudgeon" in our family! The cost is overwhelming and WDW is not my idea of a vacation. My husband and I have been before but we are planning to take our kids for the first time - they will be similar ages (5 & 9). We too are early risers and I have been questioning the ability to stay late for fireworks/night shows. Just so nice to hear a family who had realistic expectations and didn't have plans to push everyone to the limits just to make sure they see everything. Love the tip about breakfast at Hollywood & Vine prior to Jedi Training signup!

This is so our family!! We'll be going the first week Dec. 2015. I've been three times, but it's been 15 years, and it will be my husband's, and our three children's first. My husband sees money signs, and not the magic. I just mentioned the Very Merry Christmas Party to him, and his eye roll, and his frown, made me second guess involving him in EVERY decision.

Shannon, loved this episode and I didn't even realize that it was 2 hours long. For a first timer this is definitely worth listening to, especially with the whole family taking part. Great job moving the interview along, while letting them talk about what was important to them. Thank you.

I loved this episode, I didn't want it to end.

The planning and detail were great

That's especially amazing considering how LONG this episode was. Glad you liked it!

I Loved this podcast. I could relate so much to this family. We took our family on our first WDW trip at the end of Sept and our kids are basically the same ages as the Tyler's. We had such a wonderful trip that I also called it "our once in a lifetime" trip and it was fun for me to kinda re-live our trip by listening to this podcast. I wouldn't call my husband a "curmudgeon" but he definitely wasn't getting into the details of planning this trip like I was. Once we were there, I think he really appreciated how much time and planning I'd put in to make the days in the parks go smoothly. We got to do most everything we wanted and had to wait in very few long lines. I already want to plan another trip now!