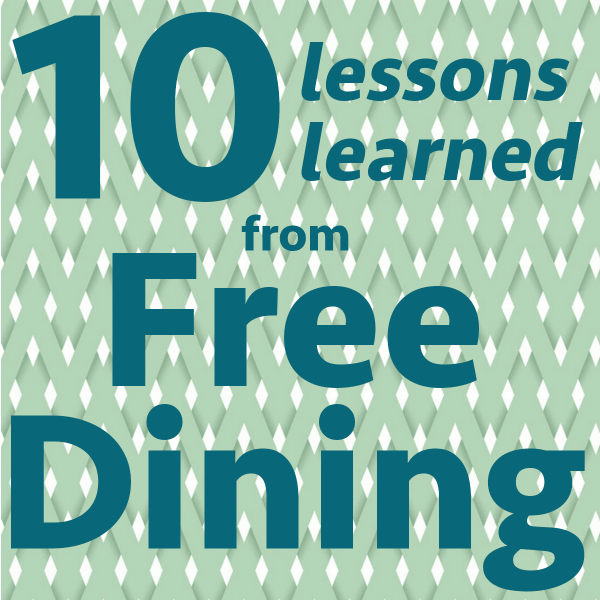 Free Dining is a crazy popular promotion, but things don’t always go the way people think the will.

Today, I have 10 lessons we can learn from Free Dining, along with lots of news and a quick tip of the day.

Jedi Training Academy signups have recently been allowed before Hollywood Studios opening time. Look for the separate line for that at the entrance.

Why only pay a deposit?

So that if you have to cancel your original booking to make a new one (which is sometimes the easiest way to book a Free Dining offer), you're only waiting for a deposit refund rather than the whole amount.

Booking online is easier than by phone so you may have gotten your first choice if you'd make a new reservation online and then called to cancel your previous one later. The reason they popped open a few days later is because the holds that travel agents had placed for their clients expired.

Thank you for all the work you put in to this site. I've been following along, doing the research, following release trends, and was able to catch the Disney dining for the dates and resort I wanted. When I called to cancel my previous reservations, the Disney agent said she was just happy she could help someone that day. The availability was running out quickly and she already had to disappoint people. If it weren't for all the information I found here, planning this trip would be much more stressful. I have to agree though that booking the resort early didn't help as I had to upgrade to a better room to qualify for the promotion.

Does Disney unblock additional rooms? We got free dining but not at a resort we wanted (all star music) for the week before the dates we wanted. We were originally booked at CBR but moved resort and dates get free dining. With a family of 5 including a teen it seemed like free dining was worth it. Now I kind of regret it but can't get my dates back at CBR. Will more rooms open back up? I ended up moving everything after being on hold for hours. I felt like I had to get some kind of discount at that point!

I was able to book free dining at CBR for the last week of September just this past weekend. I have checked everyday for a deal since it was released and one finally showed up for my dates at a moderate that sleeps 5. We had to upgrade to preferred but still saved a ton.

Keep checking back online and calling! I had to switch to a resort I didn't want either just to get the free dining. I called back every day and on the 4th day, a room at Pop Century had opened back up! So I ended up with free dining at the resort we wanted!