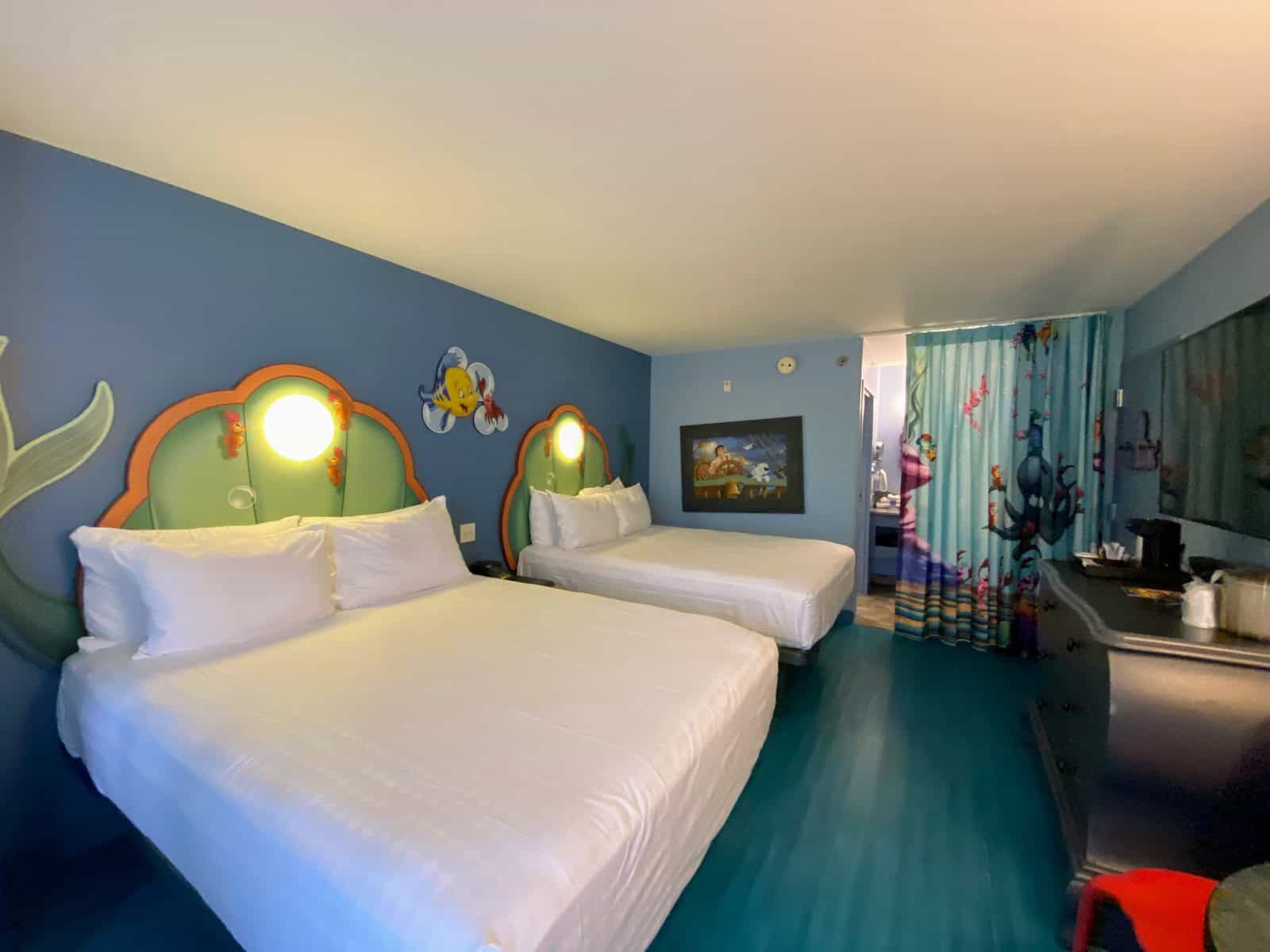 Part of the magic when visiting Walt Disney World is making hotel reservations. This sometimes isn’t an easy feat, especially because there are so many different resorts to pick from when booking and it can be difficult to choose.

But, if you’re looking to level-up your level of immersion with a themed room at Disney World, go no further! We’re here to help with exactly that.

Leave it to Disney to make their hotel rooms just as memorable as the theme parks.

If you want to stay under the sea with Ariel, you can! How about hanging with Lightning McQueen? Yep, you can do that too. Oh, and what about staying with Princess Tiana and other Disney princesses? This is also an option.

With that, here’s list of every themed room available at Disney World.

Caribbean Beach is all about, well, the Caribbean. You can find this moderate resort in the Epcot area. It’s a great resort for several reasons, including its pirate rooms.

The pirate rooms are located in the Trinidad South section of Caribbean Beach. You can see from the map below that the location is pretty far away from the main building, however, it is relatively close to the new Skyliner station.

You can either book a pirate room with a standard view or a pool view. In addition to the standard amenities, the rooms feature the following:

While the rooms are exactly like the standard and preferred rooms offered, these particular ones are themed after Pirates of the Caribbean.

There are pirate decorations, crates as drawers, barrels as nightstands, and a pirate privacy curtain between the bathroom and beds. Of course, the most exciting part is the beds, aka pirate ships!

Also know that there are accessible pirate rooms that are wheelchair and hearing accessible, including either a roll-in shower, wheelchair accessible tub, and visual alarms and notifications.

The pirate rooms are more expensive compared to the standard-style rooms, but you’re essentially paying for the theme.

So, if you want to channel your inner Captain Jack Sparrow and/or Redd by sleeping in a bed modeled after a pirate ship, then this is your chance!

If you ever wanted to sleep and dream like a Disney princess, you can do just that in the royal-themed guest rooms at Riverside.

Riverside is a moderate resort in the Disney Springs area. It also has a sister hotel right next door — French Quarter.

The Royal Rooms are located in the Magnolia Bend section of the resort.

The rooms also have 2 queen beds and can sleep up to 4 individuals.

What makes them truly special are all of the royal fixtures. Not only do the faucets represent the Genie’s lamp from Aladdin, but there are “flying carpets” on the floor, themed-bedding, and artwork in honor of both Disney princesses and princes.

But, the best part are the headboards that light up with fireworks. All you have to do is push a button to activate the magical display and it’s like you’re sleeping under actual fireworks.

Art of Animation, a value resort in the Wide World of Sports area, has the most options for themed rooms. They’re modeled after Disney and Pixar films. There are even suites to book!

Art of Animation is broken into different areas for each theme with each section heavily decorated.

This is what’s available:

Because of their close location to both the main building and the Skyliner Station (which is located off of the bridge to Pop Century), The Finding Nemo Suites are considered “preferred” and are slightly more expensive.

All the suites have a sitting area with a couch, dresser, and TV. The table with chairs also doubles as a pull-down bed.

There’s also a kitchenette with a microwave, coffee maker, and a mini-fridge. The best part is the family suites have — wait for it — 2 bathrooms!

There is one connected to the main bedroom and one off the main living area.

The suites are more expensive, so if you want to spend less and also stay in a themed room — check out these standard rooms inspired by The Little Mermaid!

This is just your typical standard room that sleep up to 4 people, has views of the courtyard, pool, or parking area, and has either 2 double beds or one king bed.

Like most of the hotels at Disney World, Art of Animation also has wheelchair and hearing accessible rooms.

Between the theming, the chance to stay in suite (and have more space), and also having access to the Disney Skyliner just like Caribbean Beach (Art of Animation shares a station with Disney’s Pop Century Resort), there are quite a few perks.

Learn more about Art of Animation.

As of publication, Polynesian is set to reopen in late July 2021 following a lengthy refurbishment. You can also make reservations. The Villas and Bungalows are currently open and also accepting bookings.

At this time it appears that the Moana themed rooms will be found in regular non villa rooms (including those with Theme Park and Lagoon Views). There is no word yet whether the theming will be extended to the Disney Vacation Club section of the resort.

The Polynesian is a classic resort that has access to the Monorail, is located closest to Magic Kingdom, and has a lot of history.

But, when it reopens come July, guests will be able to stay in reimagined rooms that feature patterns, textures, and designs from Moana.

The color palette of the updated rooms is inspired by the Pacific Ocean and its islands. There are also characters that can be spotted throughout, like Moana, Maui, Hei Hei, and Pua.

There are also new furnishings and fixtures. A majority of the rooms are set up the same as your typical standard room, can sleep up to anywhere from 2 to 8 adults, and also seem to have plenty of storage.

Depending on the room booked, you can also get some pretty stellar views of either Seven Seas Lagoon, Cinderella Castle, Magic Kingdom, the Monorail, to name a few. There are also rooms with accessibility options.

The Moana theme isn’t over-the-top and tastefully done, just as it should be for a deluxe resort like the Polynesian. We’ll be sure to let you know when Disney releases an official reopening date.

There have also been rumors that select rooms at Disney’s Contemporary Resort will be updated to incorporate Pixar’s The Incredibles. Disney has not commented on such reports.

But, Disney previously did announce that in April 2021 some of the guest rooms will be “reimagined.” It’s important to also note that some Main Tower rooms will be unavailable during the refurbishment, but most resort areas and amenities will still be available for guests.

If you’d like to book a stay for any of these themed rooms, an expert travel professional at Small World Vacations can help you make reservations and with other planning needs!