It’s been a sad day for many Cast Members, including Yehaa Bob Jackson who is known for playing at the River Roost Lounge at Disney’s Port Orleans Resort — Riverside.

On Sept. 29, the layoff news of approximately 28,000 domestic employees across all of Disney Parks, Experiences and Products (of which about 67% are part time) was announced.

Jackson took to Facebook on the same day as the layoff announcement revealing he and his act will not be returning (currently, both Riverside and French Quarter remain closed) to the River Roost Lounge.

“And that’s how it ends, not with a bang but with a whimper,” he wrote. “I’ve just learned my act will not be returning to Disney. I made so many friends over the last 23 years, it was a great time, we had a lot of laughs together. I’ll be continuing my Sunday shows for now. I’ll keep you posted, I’m still digesting all of this-” 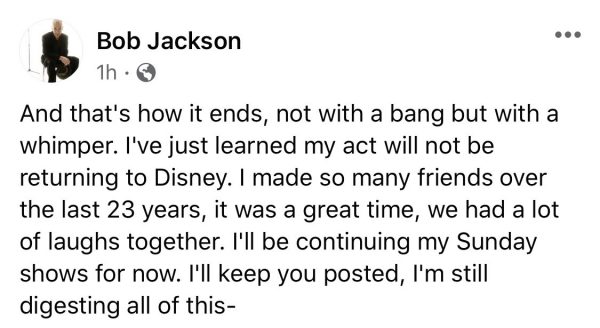 Regarding “Sunday Shows,” Jackson is referring to shows he performs virtually on Facebook.

As previously mentioned, the news that 28,000 Cast Members are being laid off was announced on Sept. 29. Josh D’Amaro, the Chairman of Disney Parks, Experiences and Products, released a statement on Tuesday announcing the devastating news.

“In light of the prolonged impact of COVID-19 on our business, including limited capacity due to physical distancing requirements and the continued uncertainty regarding the duration of the pandemic – exacerbated in California by the State’s unwillingness to lift restrictions that would allow Disneyland to reopen – we have made the very difficult decision to begin the process of reducing our workforce at our Parks, Experiences and Products segment at all levels, having kept non-working Cast Members on furlough since April, while paying healthcare benefits,” the statement reads in part.

According to Scott Gustin, layoffs will affect “executive, salaried, and hourly roles.” 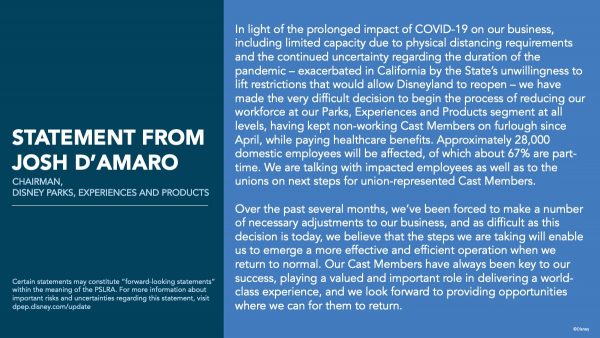 However, it was announced that First Time in Forever: A Frozen Sing-Along Celebration will return to Hollywood Studios on Oct. 5. (The Actors’ Equity Association and Disney reached an agreement in August allowing them to return to work.)

These are certainly tough times for many. Unfortunately, there will continue to be a mix of both good and bad news as time goes on. We will of course keep you updated.

If you want to help, you may want to check out the Cast Member Pantry, an organization helping Cast Members to feed themselves and their families, and Unite Here 737, a local union mainly representing Disney hotel housekeepers and food service workers.