Complete guide to Universal (with comparisons to Disney World) 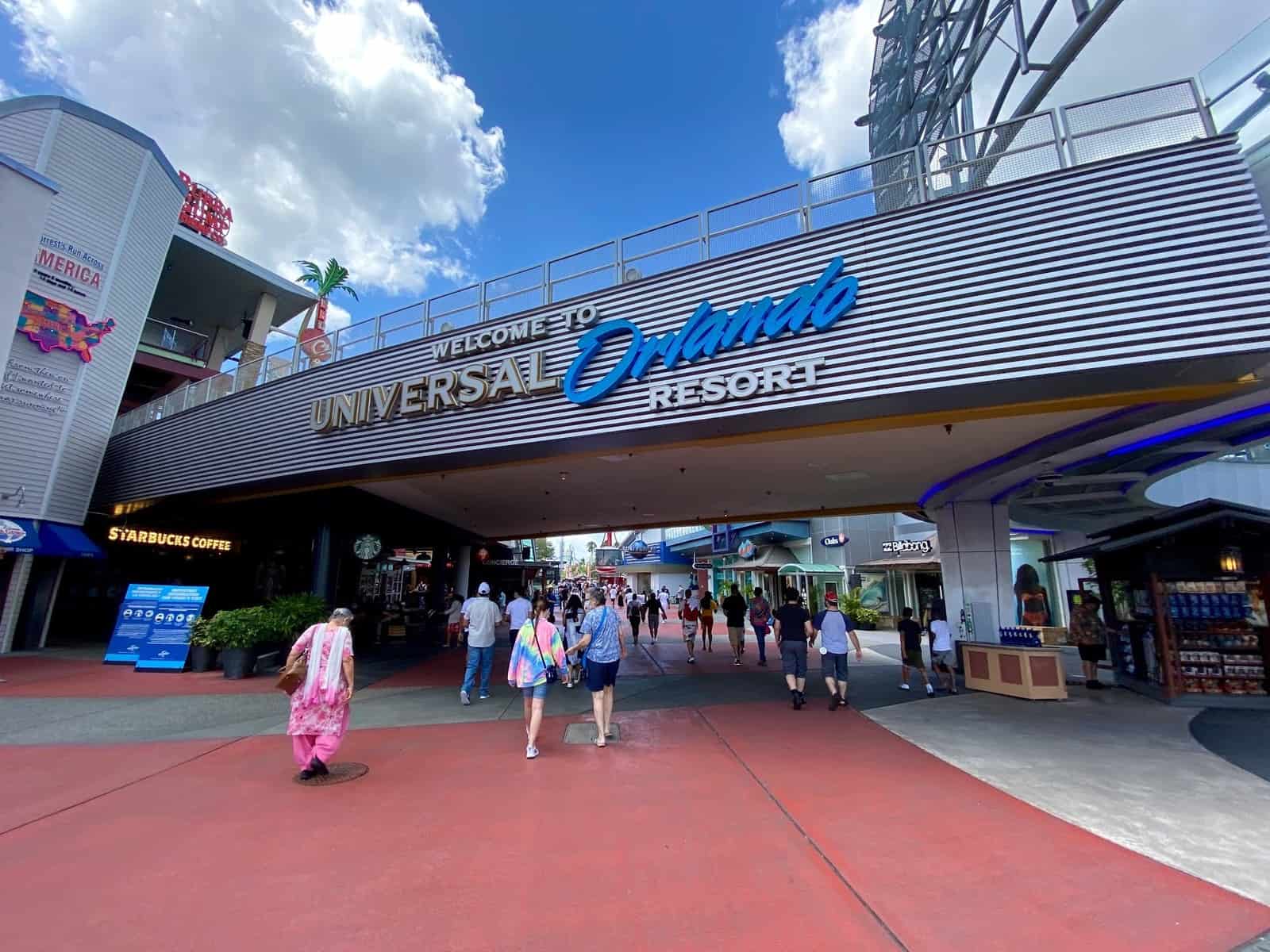 Even though this site mainly focuses on Walt Disney World (and even some Disneyland), Universal Orlando is another theme park Disney World fans like to visit.

If you’ve never been, we’re here to help you understand the ins and outs.

Here’s an overview of Universal (with many comparisons to Disney World as a reference) with lots of links to help you through the planning process.

Ready to get started planning your trip to Universal?

What is at Universal?

There’s also another park being built nearby called Epic Universe that will feature a Super Nintendo World area. This is reportedly slated to reopen sometime in 2025.

Universal Studios is the original theme park that first opened in 1990. Yes, the E.T. Adventure (an opening day attraction) remains.

There’s so much to experience at Universal Studios, including Diagon Alley from the world of Harry Potter, an entire section dedicated to The Simpsons, and even an attraction inspired by the Fast and the Furious franchise.

Find out more about Universal Studios.

Islands of Adventure is full of, well, adventure.

From Jurassic Park goodness (including the new VelociCoaster), to Harry Potter magic, like Hagrid’s Magical Creatures Motorbike Adventure and Hogsmeade (Butterbeer, anyone?), this park has plenty to offer guests.

There’s also a range of shopping and dining options.

Learn all about Islands of Adventure.

Volcano Bay is Universal’s only water park. As you can see in the photo above, it has a stunning view — and a photo-worthy volcano.

Speaking of the volcano, it’s an actual waterslide called Ko’okiri Body Plunge featuring a 70-degree fall through a drop door and a 125-feet descent.

Don’t fret, because there are other much tamer attractions, like the winding river and even some lounge chairs to chill.

Check out all of the Volcano Bay ins and outs.

This is the newest theme park joining Universal Studios and Islands of Adventure.

We still don’t know a lot of details, except that the park will feature Super Nintendo World and that it won’t open for awhile (possibly 2025).

Here’s everything we do know about Epic Universe.

CityWalk is basically like Walt Disney World’s Disney Springs and Disneyland’s Downtown Disney, but it’s more along the size of Downtown Disney — small.

This shopping and dining area is essentially in the center of Universal Studios and Islands of Adventure. You can get to both theme parks from here. After all, CityWalk has been dubbed “The Epicenter of Awesome.”

This definitely makes for a nice option if you want to grab a meal or a beverage outside of your hotel or away from the busy theme park.

Learn about everything you can see, do, and eat at CityWalk.

You can walk from some of the hotels to the parks, but there is also complimentary transportation provided in the form of a shuttle bus.

There are also offsite resorts to choose from and we go over some of those as well.

Get the pros and cons of onsite and offsite Disneyland hotel options.

How big is Universal compared to Disney World?

Universal is much similar to Disneyland in size — so a lot smaller than Disney World, which is 27,000 acres.

As detailed by Orlando Park Stop, with the addition of Epic Universe (it’s being built on 750 acres), the resort as a whole will nearly double in size.

But, just because Universal is smaller isn’t a bad thing. It’s not as overwhelming and you can manage to pack in a lot more across 2 theme parks and one water park, compared to 4 theme parks and 2 water parks at Disney World.

Plus, there’s still a lot to experience at Universal. And thanks to the size, this makes it easier to navigate and you can easily park hop.

You can download a PDF version of the Universal Orlando map.

The weather at Universal is the same as Disney World. After all, they both reside in Orlando, Florida.

Depending on the season, some months will be hotter and wetter than others. As you can see in the graphic below, on average, July is the warmest month and January is the coolest month.

Summers are very hot and humid, so that’s something to keep in mind. During the cooler months, you might even need a jacket or sweater, especially in the evenings.

Make sure you always check the weather before you pack, so you bring the appropriate items. Also keep in mind hurricane season, which typically takes place in August, September, and October.

And always pack an umbrella or a poncho, because Orlando weather isn’t 100 percent reliable. You never know when the sky will open up and you don’t want to get soaked.

There are quite a few differences between Universal and Disney World. A few include:

Universal is definitely easier to plan compared to Disney World, mainly due to size. But, both are fun and unforgettable experiences for a multitude of reasons.

How to Plan a Universal Trip

You can basically use our same 6-step process that we teach for Disney World trips when it comes to planning a Universal visit.

Step 2: Decide Where To Stay

Learn about onsite and offsite Universal resort options with our list of pros and cons of Universal hotels.

Similar to Disneyland, you don’t really need to book a week-long vacation to Universal. You can easily fit in what you want to do in the matter of 2-3 days.

Also keep in mind if you want to only focus on the two theme parks or add on a day for the water park, as well.

If you want to explore every nook and cranny, you might want to budget about a total of four days.

Make sure you know where you want to eat during your Universal trip, and get reservations for popular meals ahead of time.

Read our guide to Disneyland dining.

Just like at Disney World, you’ll want to make sure you’re navigating the parks as efficiently as you can with minimal waits.

Learn about all of the options you can plan for your trip to make it extra special.

If you want to know the best way to incorporate a Universal trip into your Disney World trip, we have a guide COMING SOON!

Get the Universal app

Similar to the My Disney Experience app at Disney World, Universal has its own official app that will definitely come in handy during a trip.

Transportation at Universal is nowhere near as complex like it is at Disney World. It’s actually quite simple, but there are still some things you need to know prior to your trip.

From complimentary transportation, to parking, to using rideshare options, how to get from the airport to the resort, learn about Universal transportation options.

Keep in mind that you will also do a lot of walking at Universal, so make sure to wear comfortable shoes!

What height requirements are there for Universal rides?

Just like all theme parks, there are height requirements for select Universal rides to ensure the safety of all guests – 11 at Universal Studios, 13 at Islands of Adventure, and 14 at Volcano Bay, to be exact.

How do Universal tickets work?

There are lots of things to learn about Universal tickets, including the option to add Express Pass, and ways to save money, of course.

Learn about your different ticket options.

Does Universal have something similar to PhotoPass?

You can have your photo taken by in-park professional photographers. There are also photos taken on select popular rides and attractions. You can even download photos digitally.

Learn more about the different photo packages you can purchase.

Packing for a Universal trip

If you’re not sure how to pack for a trip to Universal, check out our ultimate packing guides for both Disney World and Disneyland for ideas!

Here are the important health and safety protocols you need to know before visiting.

Temperature checks were eliminated beginning May 6, 2021.

It’s important to know the health and safety measures before you enter Universal Orlando. Read about these guidelines in more detail on Universal’s website.