In some sad news, the Grand Floridian Society Orchestra announced on Saturday, Sept. 26 that their final performance will be on Oct. 3, 2020. Disney has not commented on the orchestra’s statement.

“It’s hard to find the words but, sadly, our days at the Grand Floridian are over,” the orchestra announced on Facebook. “In fact, as of Oct 3, 2020, our days at WDW will come to an end as well.”

The orchestra is known for playing at Disney’s Grand Floridian Resort & Spa. But, they have actually been playing as “The Disney Society Orchestra” over in Hollywood Studios since early August. They were part of the new show, The Disney Society Orchestra and Friends, that took place at the Theater of the Stars, where the currently unavailable Beauty and the Beast — Live on Stage show used to play.

In addition to the Disney Society Orchestra playing beloved Disney, Pixar, and Star Wars tunes, Beauty and the Beast characters also made an appearance at the end of the show. 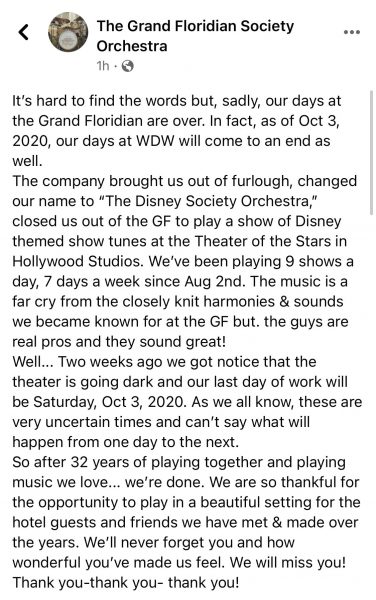 “The music is a far cry from the closely knit harmonies & sounds we became known for at the GF, but the guys are real pros and they sound great!” the Grand Floridian Society Orchestra wrote on Facebook, before adding, “Well… Two weeks ago we got notice that the theater is going dark and our last day of work will be Saturday, Oct 3, 2020. As we all know, these are very uncertain times and can’t say what will happen from one day to the next.”

The orchestra has been playing together for a total of 32 years. This is definitely heartbreaking news for both the musicians and fans who have loved watching the orchestra bring music to life at the Grand Floridian. 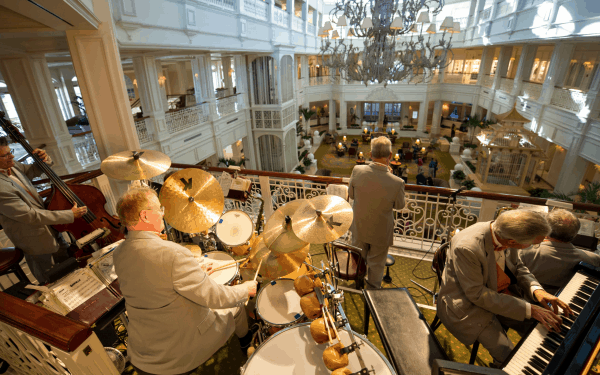 Unfortunately, the pandemic has affected multiple jobs across the globe, including many positions at WDW.  But, as the Grand Floridian Society Orchestra shared, “We are so thankful for the opportunity to play in a beautiful setting for the hotel guests and friends we have met & made over the years. We’ll never forget you and how wonderful you’ve made us feel. We will miss you! Thank you-thank you- thank you!”

It’s unclear if or how long the Theater of the Stars will remain “dark” or if the live Beauty and the Beast stage show will return at any point in time, especially now that the Actors’ Equity Association and Disney reached an agreement in August.

We’ll of course keep you updated on any future changes. Until then, keep an eye on our WDW reopening page and our 2020 & 2021 vacation planner for all of the latest information.