You will probably want to see at least 1 or 2 of the nighttime entertainment options during your Disney World trip, but there are some locations to view these shows that are better than others.

The best nighttime show and fireworks viewing spots at Disney World are not hard to snag, but they do take a little planning. Check out these tips below to help you find the perfect spot to catch all the action.

Happily Ever After fireworks

Magic Kingdom fireworks are probably the best nighttime show at Disney World and often just before they begin or right after, there’s a castle projection show called Once Upon a Time that’s definitely worth seeing.

The projections used in both shows mean you’ll want to make your way closer than what you might have stood for Wishes (the former fireworks show). For the “perfect” spot, aim to be as close to the middle as you can just outside of the main Hub, and, if possible, at least as close as the Garden View area for the Tomorrowland Terrace Fireworks Party.

Those who want to leave right after fireworks (which is especially useful so you can get ahead of the crowds lining up to hop on the bus, monorail, or ferry) should find a spot at the front of the park for a quick exit as soon as fireworks end. It is important to note, however, that from this location you’ll likely not be able to see the projections which are a major component of the overall show. 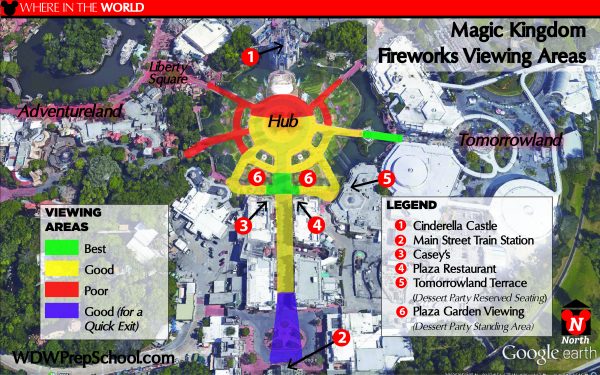 You can also view Happily Ever After from outside the parks by sitting on the beach areas of The Grand Floridian, Polynesian, Ticket and Transportation Center, and The Contemporary.  Like viewing from the front of the park, you won’t be able to see the projections from these locations but since these spots also pipe in the music it makes a fantastic alternate spot for people that like to avoid the heavy crowds in the park.

FYI: Though there used to be a FastPass+ for fireworks viewing, it went away in spring 2016.

Epcot has one nighttime show, Illuminations, which takes place on the lagoon in the World Showcase area. The nice thing is that there are lots of spots available (which is why the FastPass+ and dessert party aren’t recommended here), but there are a few peninsula areas that are particularly nice spots to watch from if they aren’t closed off for private events. 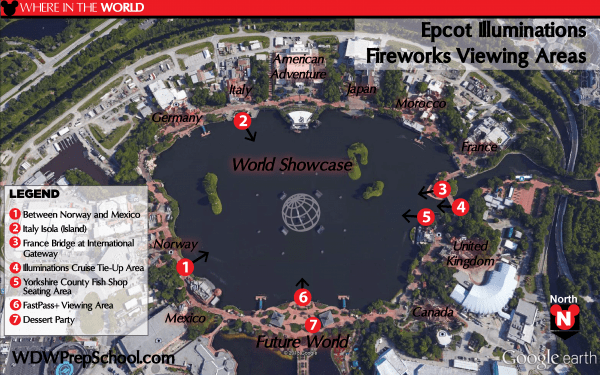 There’s a lot of smoke in the air during and after Illuminations and the wind direction determines which way it goes, but it often blows toward the France/UK pavilions. People wanting to avoid that should consider spots on the Norway/Italy side of the lagoon.

Hollywood Studios has a nighttime show called Fantasmic which takes place in its own theater. People who book the Fantasmic Dinner Package will be seated in the middle sections, with FastPass+ and standby on either side of that.

Sit toward the middle or back for the best views (and to avoid getting wet). 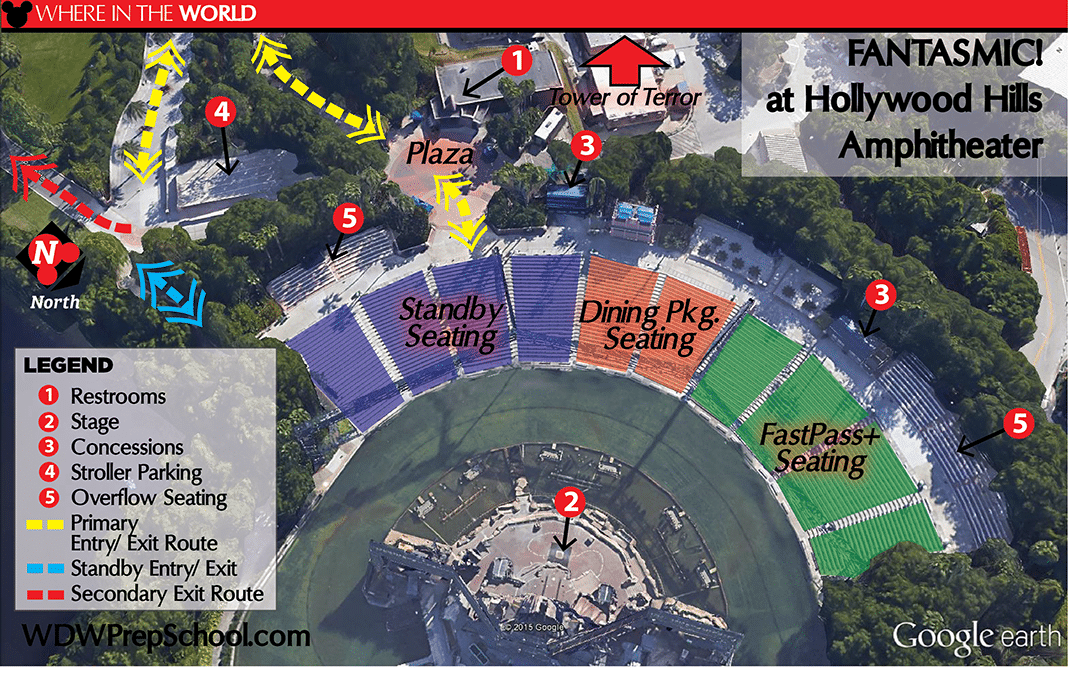 Get more Fantasmic tips and tricks.

Hollywood Studios also has fireworks scheduled regularly now, and the best view of that is from near the Chinese Theater. The current show involves projections and pyrotechnic effects in addition to the fireworks, so in order to get the full effect you will need to be in front of the projection towers labeled on the map below.

Since it’s not a large area, your best bet is to find a spot about 45 minutes beforehand. Once you pick a viewing location, members of your party can come and go to use the restroom, get snacks, etc. 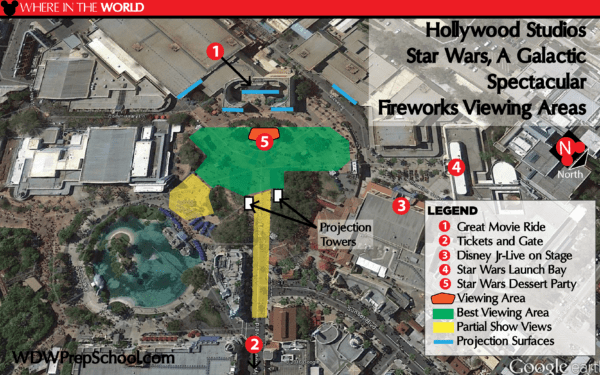 Animal Kingdom has a nighttime show called Rivers of Light. Seating is very limited, but you can see the different sections in the graphic below. 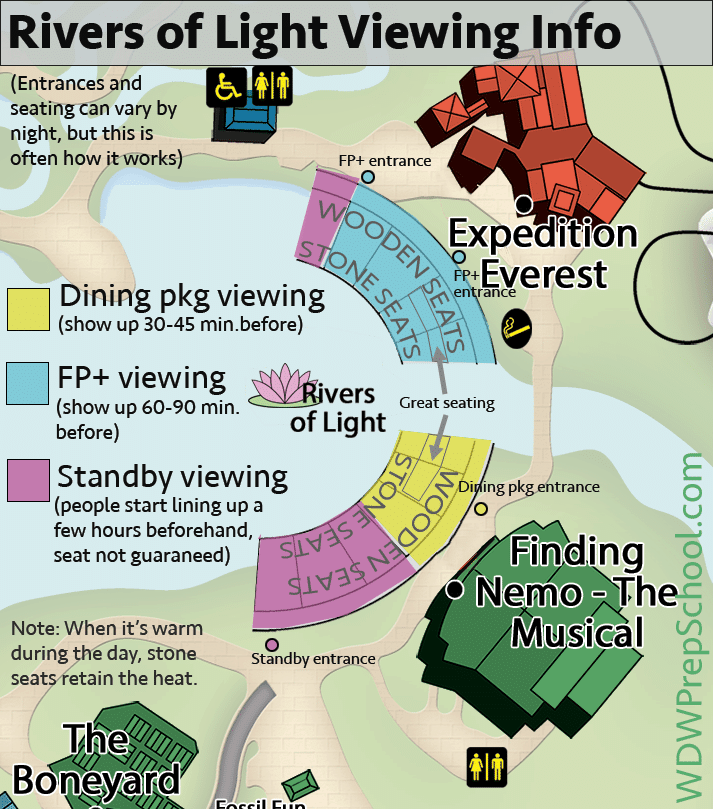 Get more Rivers of Light tips and tricks.

Any other thoughts or comments on finding the best nighttime show and fireworks viewing spots at Disney World? Be sure to leave them in the comments.

What time do they start blocking off the flow of traffic around Cinderella’s Castle for the fireworks?

Where is the best spot to watch Happily ever after with toddlers?

Can you see Star Wars at 8pm, then get to Epcot to watch Illuminations at 9pm?

It's about a 15 minute walk from HS to Epcot, so if you walk briskly, you shouldn't have any trouble.

I have a question that I see was previously asked, but I don't see a response. Can Fantastic and Star Wars fireworks be seen on the same night? I would consider purchasing a desert package for Star Wars if we can get to the 'spot' after Fantastic.

Most of the times, no. If they are scheduled close together, you basically have to choose which you'd like to see.

Can you see fantasmic and Star Wars fireworks on same night