No further information was provided, including if walk-ups will continue to be accepted or if the location will temporary close. We will of course update if or when we learn more.

This news comes after it was announced that Disney was assuming control of the Morocco Pavilion shops and dining locations by the end of 2020.

For those unaware, Disney wasn’t overseeing the pavilion’s restaurants, stores, and exhibits, which were also funded and designed by the Kingdom of Morocco. But, now that’s all changing. 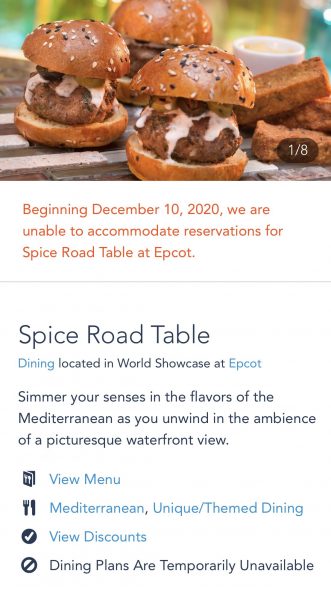 “After many years of working together, we have a mutually agreed arrangement to begin the process of transitioning operations of the Morocco pavilion to Disney. By the end of the year, Disney will assume operations of this important part of EPCOT and under Disney’s operation, the pavilion will continue to honor the rich traditions and legacy it has since it opened.”

According to Disney Food Blog, this change isn’t due to the current pandemic, but “rather it was a mutual agreement made between both sides to transition ownership.” The website also noted that the Moroccan Embassy and Morocco Tourism Board “are still involved with the pavilion.”

Walt Disney World continues to face many changes ever since temporarily closing in March and then reopening in July. As always, we will keep you in the loop.