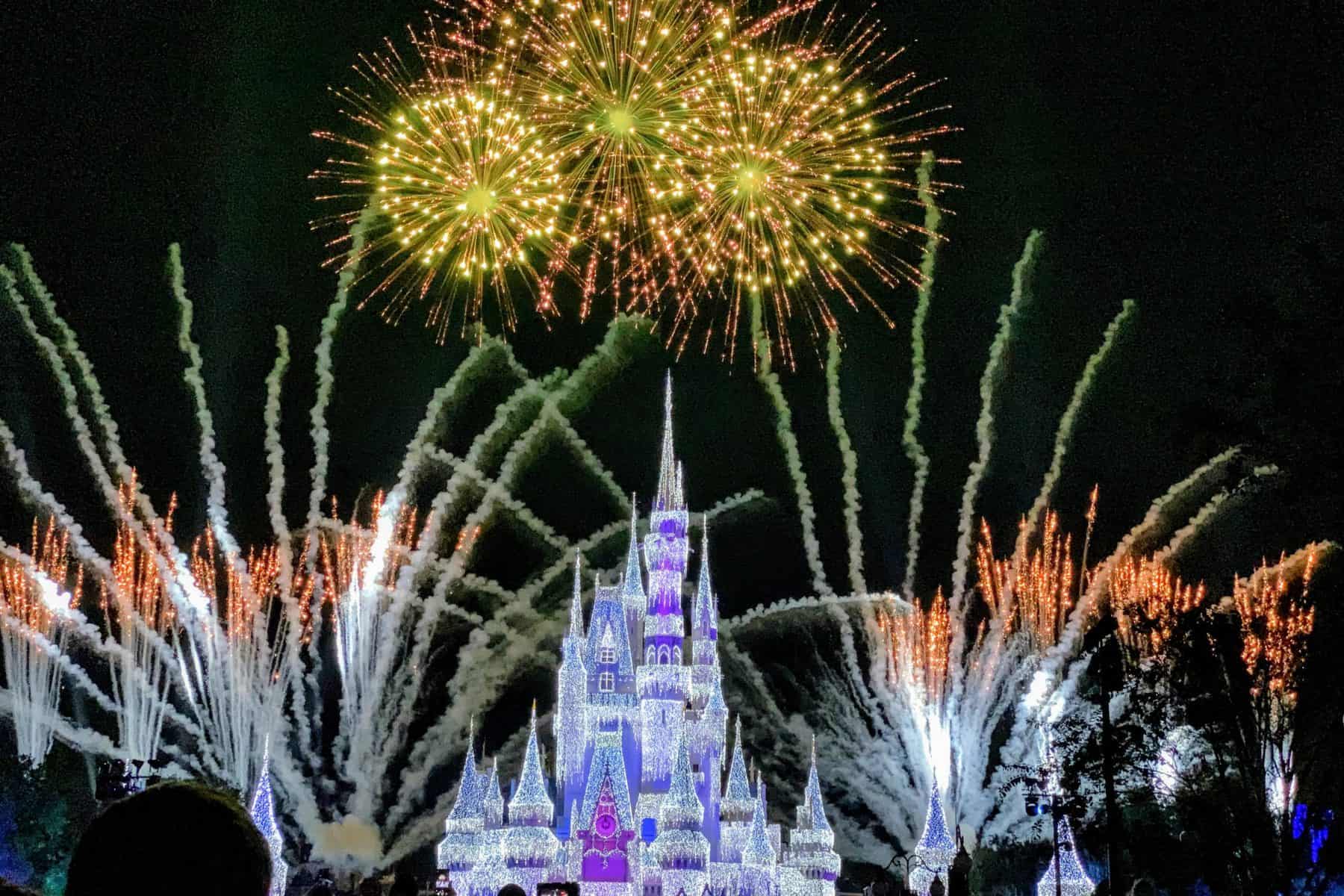 If you’ll be visiting Magic Kingdom, the nighttime fireworks shows are a definite “must do”.

Here’s a handy map of where to stand to get the best view of the Magic Kingdom fireworks, schedule & times information, plus some of our favorite tips.

How to Get the Best Magic Kingdom Fireworks View

Important note: some information below has been impacted by the current health and safety measures in place at Walt Disney World.
Whenever possible, we have been updating posts to provide the most up-to-date information. However, some things (like character meet and greets, FastPass+, nighttime entertainment, the NBA Experience, and the Disney Dining Plan) are currently unavailable. Please check back often for updates.

The best of the best fireworks viewing spots can go early. And during busy times of the year (like the holidays), there can be some serious competition for the prime locations.

Lots of people want to know how early you should snag a spot, and that depends on 3 things:

If you are visiting the Walt Disney World Resort outside the busy holiday season (or the 4th of July), 30-45 minutes early can get you a “good” fireworks viewing spot for a family of 4.

It probably won’t get you the best of the best, but it will still get you a good view for the show.

But, if you want one of the best spots or if you have a large group or are traveling during a busy time of the year, you may want to start looking closer to an hour (or more) before the show starts.

When we are hunting for a spot to watch the fireworks shows, these are our go-to spots:

Things that will ruin your view

We love trees, but when it comes to viewing the nighttime shows at Magic Kingdom park, a tree that is in the wrong spot can ruin the entire effect.

Your goal is to see Cinderella Castle as clearly as possible. If trees are blocking out most of the castle (or in the case of shows that are primarily fireworks, the sky), that isn’t going to be a great view.

Buildings and other structures

The same thing can be said about the buildings and turrets that surround the castle. If the castle is blocked from your view, keep looking for a spot.

The front of the park (near the Main Street Train Station) can give you great views of the fireworks, but if you are watching a projection-heavy show (like Happily Ever After) you won’t see the details on Cinderella Castle. That may not matter to you, but if you want the full effect, that far away isn’t going to work.

And, if you’re too close to Cinderella Castle, you’ll have a great view of the projections, but you’ll not be able to see a lot of the fireworks.

As for the best angle, looking at the castle straight on is ideal because that puts the fireworks in the proper position behind the castle. You may still get a good view from the sides, but the fireworks may look off-center instead of appearing directly behind Cinderella Castle.

What time are fireworks at Magic Kingdom?

Magic Kingdom has fireworks every night of the year. Most of the time they are free with your park admission, however, there are a few nights in the fall and winter where you’ll need a special ticket.

Show times can vary, so make sure you follow the monthly links below for the current information:

You can find exact show times for each month in the links below:

Magic Kingdom has several nighttime spectacular and fireworks shows that are shown throughout the year.

Here’s a bit about each of them:

Happily Ever After is the primary fireworks show. Free with your park admission, we think it is a “must see” and something you should definitely make time for on your trip.

When Happily Ever After debuted, one thing quickly became apparent:

Unlike Wishes (the previous nightly fireworks show at Magic Kingdom), there aren’t as many options for “good” viewing spots.

That’s because this new show is a combination of fireworks, projections onto Cinderella Castle, and lights.

The overall effect is spectacular, and the projections add an entirely new layer to the show. But that also means you have to be in a spot where you can clearly see the castle to get the “full” effect.

In addition to the magic in the sky, the music (performed by Jordan Fisher and Angie Keilhauer) is lovely and inspiring and guaranteed to bring a tear to your eye.

You can check it out below (just make sure to grab some tissues first).

This spectacular fireworks show is one of the best shown at Magic Kingdom. It is also free with your park admission.

And, unlike most of the other fireworks shows, this one is typically presented twice a night on both December 30 and December 31.

To maximize your New Year’s experience plan to catch the fireworks here on December 30 for (slightly) less crowds and then spend New Year’s Eve in another park.

Celebrate America! A Fourth Of July Concert In The Sky

Of course the Fourth of July should see some special fireworks, too.

The main event at Magic Kingdom for Independence Day is the “Celebrate America! A Fourth of July Concert in the Sky” fireworks display.

This is a free fireworks show, and to be honest, one of the best shows we’ve ever seen.

Like the fantastic fireworks shown for New Year’s Eve, these are also typically performed for 2 nights: July 3 & July 4th.

Note: because this show is part of Mickey’s Not-So-Scary Halloween Party, you will have to purchase a party ticket if you want to see it.

Replacing the much beloved HalloWishes (which made its final appearance in 2018), this new nighttime show debuted in 2019 and features Jack Skellington as host and includes projections, lasers, special lightning effects, and of course – lots and lots of fireworks.

Mickey, Minnie, Donald, and Goofy join in on the adventure as Jack tells the story of “how anything can happen on Halloween Night.”

Because of the use of projections, much like Happily Ever After (the regular nighttime show), the best views will be close to the castle.

Another crowd favorite is the special fireworks that are shown during Mickey’s Very Merry Christmas Party.

Like many of the other fireworks shows, this one also features a combination of projections and fireworks.

Note: For most of November and December, this show can be seen during Mickey’s Very Merry Christmas Party (which requires a ticket). But if you are traveling closer to Christmas, you can see it for free since Disney typically shows it nightly during the last week before the holiday.