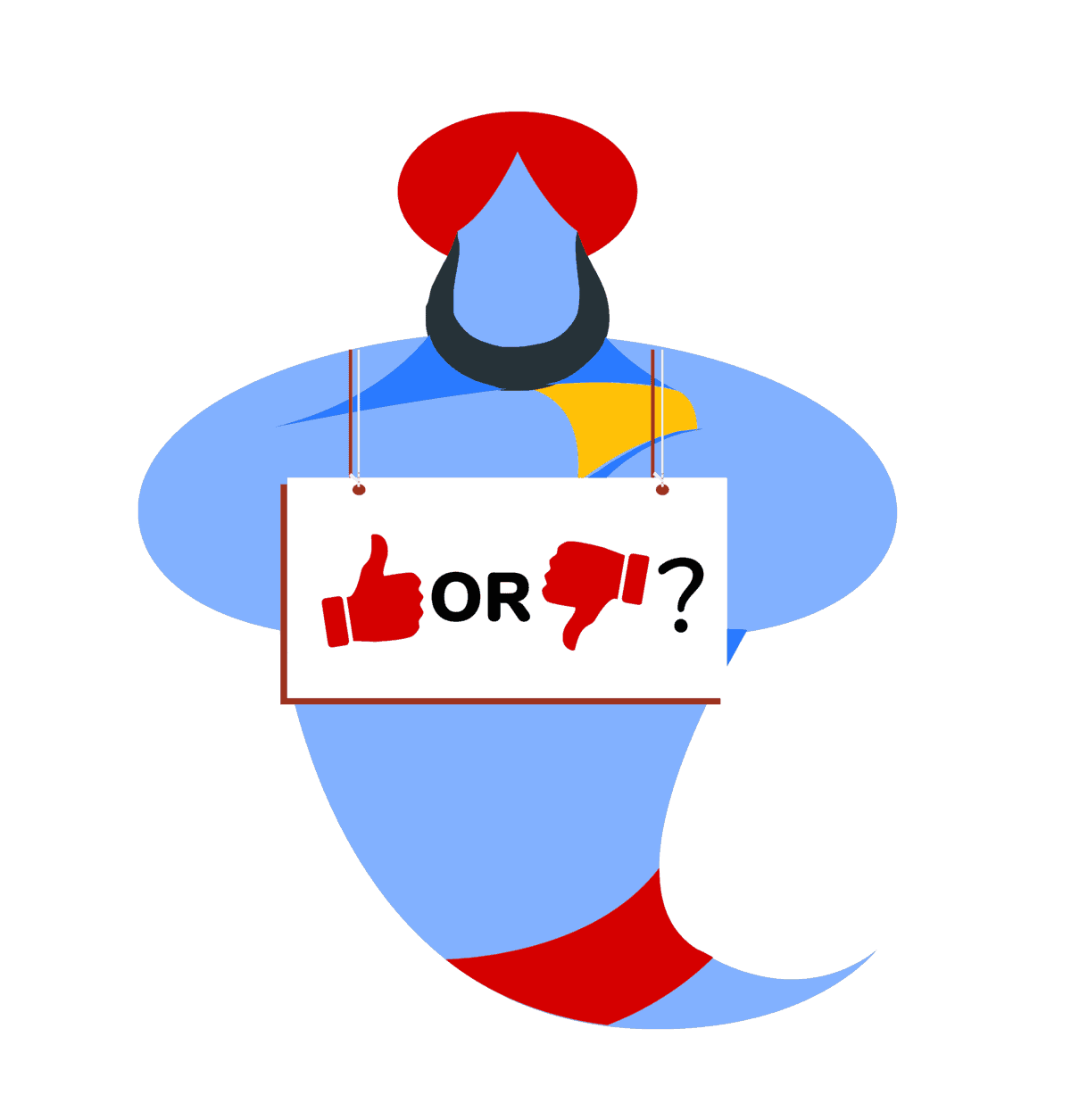 Have you ever had a date on your calendar that both filled you with impending doom AND fluffy excitement, all at the same time?

Well, for Disney World fans (us included), that is how we approached October 19, 2021, AKA The Day Disney Let the Genie Out of the Bag.

Of course, we aren’t talking about a literal Genie. That would be silly.

Nobody rubbed any bottles, and we weren’t provided with the opportunity to make completely and totally useful wishes for things like “Magic Wrinkle Remover for my Face and Clothes” or “Free Door Dash Delivery for Life”.

We are talking about Disney’s brand-new collection of systems Called Disney Genie, Disney Genie+, and their cousin with the extra-long name that nobody likes saying out loud because it takes so long to get all the darn words out, “Individual Lightning Lane Selections“.

Now, if those names are TOTALLY new to you, before you get any further in this rant tirade live-unboxing-of-emotions review, go check out these guides to get up-to speed:

All caught up? Let’s dive in.

I opened up Disney Genie, now what?

Important note: At the time of this writing, we are very early in the Disney Genie rollout. Emotions are high. Coffee levels are low. Please keep all that in mind when reading what we have to say below. We totally reserve the right to change our minds. But for now, these are our thoughts in near real-time as we explore these new functions.

This morning, as soon as the My Disney Experience app updated on my phone, I made my way to Disney Genie and paused to take in all the glory.

I opened it up and sat there thinking, “now what?”.

Disney tossed a lot of stuff into Disney Genie. You’re able to add your likes and preferences, and ideally those things are going to help their algorithm direct you towards things that will be *BEST* for you.

But, what if instead of doing JUST that, Disney Genie also tried to direct you towards things that help them out by keeping lines at attractions spread more evenly? Whaaaa?!

Want to increase guest satisfaction? Increase the number of attractions they experience.

One way that guest satisfaction is measured is based upon the number of attractions visitors experience per day.

Seems logical, right? The more time you are doing things (and the less time you spend in line), the more likely you are to record a positive review for your day.

There are lots of ways to increase the number of attractions or experiences you might have each day. For example, you could hire a VIP guide or pay for an After Hours event.

But, for today’s discussion, let’s take a look at 2 ways directly impacted by the new Disney Genie system.

To be fair, both of those things are kind of similar.

Take for instance option 1 up above.

If I didn’t know anything about the parks or attraction options, I would probably say I had a great day at WDW if I spent most of my time on rides and attractions and I never had to wait long for food. I’d be high-fiving myself all the way back to my resort. Because I didn’t do much research or know much about the parks, I wouldn’t know what I missed out on, but that’s okay because I had a great day, right?

And, for the types of people that prefer not to do the planning, and the research, and the deep dives into the best rides, shows, and restaurants, option 1 is fine by them.

But, then there are folks like US. You and I. Us and You.

People that *live* for a good spreadsheet and getting the best value for our dollar.

We don’t want to do all the things at Walt Disney World.

We want to do all the BEST things that Walt Disney World has to offer.

If you are a non-planner that just wants to go to Disney World where you will ride some stuff and you don’t care where you eat, and you’ll be happy as long as you ride 1 or 2 of the headliners, then following the suggestions put forth by Disney Genie might be for you.

But, if you are a planner that loves to research and do deep dives into all things Walt Disney World, you may find the suggestions and recommendations made by Disney Genie to be …. lacking.

But, don’t get too discouraged and think we don’t see any potential in what was rolled out today. Because even though Disney Genie might not be best for heavy-duty planners, we think Genie+ is.

Should you pay for Genie+?

I can hear the comments now:

“But Heather, you said you were excited about today! So far, you haven’t mentioned anything that oozes that sweet, sweet, fluffy excitement you promised us!”

But hold your horses because I was saving the good stuff for after you ate your Disney Genie vegetables.

Is Disney Genie+ worth the cost?

Now, at the time of this writing, we are literally hours into the launch of Disney Genie+.

Is it fair to make sweeping generalizations with such little data?

In fact, it is very non-scientific of me, but I’m gonna do it any way. I’m going with my gut. My primal planning instinct, if you will.

Here’s what I think:

Genie+ is probably going to be worth that $15 (plus tax) per person, per day cost.

And although I am excited about the potential, I would like to stress that I am NOT excited about the extra cost. I’m definitely not enthusiastic about that. It feels…icky. But, it is what it is and now that it is here, my job is to figure out if it makes sense and is “worth it”.

And, I don’t just mean “worth it” for the people that love to plan Disney World trips. But, if you are a planner, we think you’re going to be able to get even more bang for your buck out of it than the average guest.

If you have done your research and know everything that the parks have to offer, Genie+ will make it easier for you to experience those things with the shortest waits possible.

And, because you are a planner, you’ll be able to figure out where you should use your Genie+ passes in order to maximize your day. People that aren’t planners that are using Genie+ aren’t going to have that advantage.

Now, do we have a comprehensive list of your “best bets” for Genie+?

Not quite yet. I promise we are working on it.

But, if you are a Disney World veteran, you can probably make some guesses as to which attractions make sense, and which ones you should stick to the Standby Line for.

Do you have to buy Genie+ to have a successful day touring?

If you prefer not to buy Genie+ but you are particular about what you want to ride (i.e. don’t want to just go with what Disney Genie suggests), we do still think you can have a successful day touring.

Will you spend more time in lines? Probably. Will that cut into your pool/cocktail/napping time? Likely.

But, if you don’t mind longer days and a bit more time in lines, you can probably still get a lot done, especially if you decide to spring for a few Lightning Lane Individual Selections.

And what about Lightning Lane Individual Selections?

Looking to make your vacation even more frictionless?

(Sidenote: I just decided I don’t care for the word “frictionless”. Please join me in boycotting it).

Then those Lightning Lane Individual Selections might be for you. Maybe. I mean, they are definitely an option.

But, don’t feel like you have to pay for them all.

In fact, right now our thoughts are that unless you just don’t mind spending the money, you should maybe only think about using them on the attraction(s) that are your ABSOLUTE-MUST-DO-RIDE-OR-ELSE-THE-TRIP-WILL-BE-RUINED attractions.

Otherwise, we recommend hitting up those lines during Early Theme Park Entry, Extended Evening Hours, or jumping in line at the end of the night.

Again, this advice all comes with the caution that our opinions, suggestions, and recommendations might change as we get further and further into living the new normal that is Disney Genie, Genie+, and Lightning Lane Individual Selections (SERIOUSLY – I need a new name for those).

Just to recap, we’ve gone on quite an emotional journey:

First we started off kind of “meh” in regard to the basic/free Disney Genie.

Then we skyrocketed to the world of possibilities with Genie+.

And then we started our descent back to reality with those Lightning Lane selection things.

Where does that leave us?

Here are my final thoughts, and truly, maybe these should be at the top, but I wanted to avoid scaring people away from reading the rest of what we wanted to say on this inaugural Disney Genie day.

I’m a little worried that people who aren’t tech-savvy might have a problem using Genie and Genie+.

And, I also think if you aren’t up-to-date on current Disney World terminology and jargon, you might run into some issues, too.

I think there is a Venn Diagram of people that are going to be successful using Disney Genie and Disney Genie+.

And that makes me kind of sad, because I can’t help but think about people like my in-laws. For reference, they are in their late (late) 60’s.

What if they tried to visit now, never having visited before? Sure they have smartphones but would they know all the terms and jargon? Would they be able to navigate the cluttered Disney Genie interface?

If a guest isn’t a regular tech and/or app user, they may get frustrated fast.

Disney tried to pack in all sorts of useful details, but while they may be useful for frequent Disney World guests, it also makes the space in the app confusing.

I keep trying to imagine what a complete newbie would think.

It’s a lot of lingo. A lot of the same/similar words that mean different things (ie Genie vs. Genie+).

Maybe I’m overthinking this, but when I try to think of my father-in-law going to WDW and having to use Genie+, I am not positive that he could do it without getting frustrated.

But the catch? If you are reading this, you likely aren’t going to fall into that “complete newbie” category.

And, for Disney vets and people comfortable with the old FP+ system and MDE, I think we are going to have a great time with Genie+. I think we’ll be able to maximize our days and get a lot done.

But, for others, I think it might just be too much.

Have you tried Genie or Genie+? Let us know how it went in the comments down below.