In some exciting news, Disney confirmed on Wednesday, Dec. 16, that the Electrical Water Pageant is returning to Walt Disney World.

An exact date wasn’t given, but all we know currently is that the nighttime parade will resume “soon.”

However, according to the WDW entertainment calendar, the Electrical Water Pageant is listed as returning on Sunday, Dec. 20. Disney has not officially confirmed this date.

Guests at Disney Resort hotels along Seven Seas Lagoon and Bay Lake will once again have a chance to see The Electrical Water Pageant as it will soon make its return to the waterways of @WaltDisneyWorld Resort. pic.twitter.com/ImuN6G3CcL

You can even spot the parade outside the entrance of Magic Kingdom.

The WDW website has listed approximate times of where and when guests can catch the show. They are as follows:

This is definitely refreshing news to hear. Ever since WDW reopened in July following a temporary closure due to the ongoing pandemic, nighttime entertainment at the parks has temporarily been suspended for health and safety reasons.

That said, for the holiday season, projections cover Cinderella Castle in the evenings for Magic Kingdom guests to enjoy. There are even short bursts of firework that happen when the projections change. 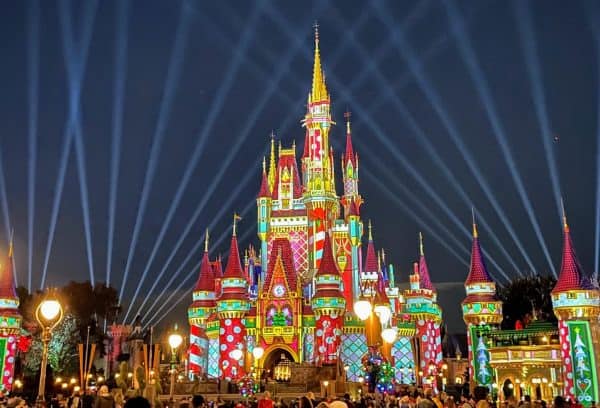 To be clear, there are four different designs that are projected onto the castle and change about every 15 minutes or so. This isn’t a nighttime show like Happily Ever After.

Even Animal Kingdom’s Tree of Life and Hollywood Studios’ Tower of Terror transform in the evenings for the holidays. Again, these aren’t shows to prevent crowds from gathering.

It’s nice to not only be able to enjoy the parks when its dark, but to also experience at least a little bit of nighttime entertainment.