Everything you need to know about the Disney Skyliner 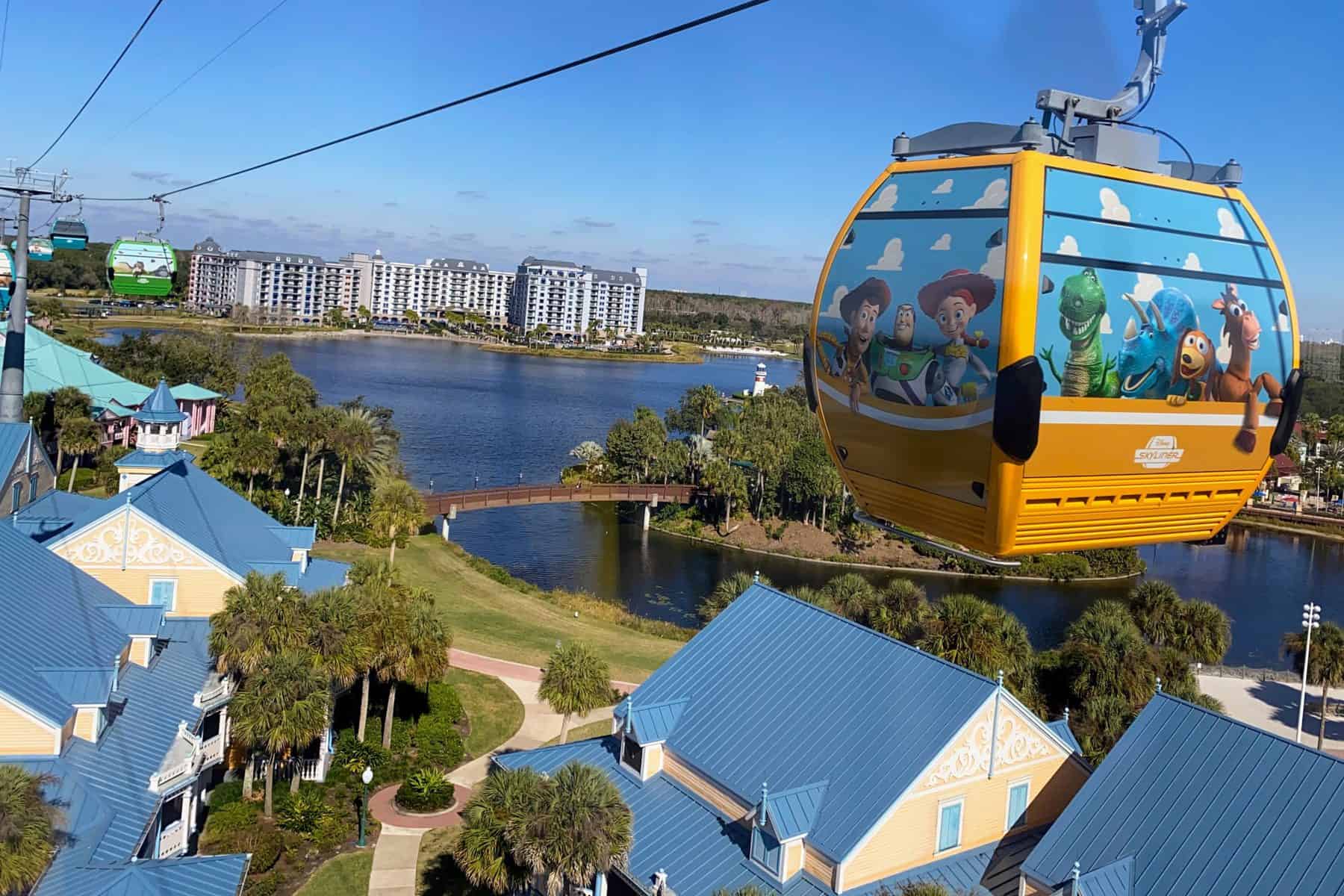 We are in love with the new Disney Skyliner – and after you check out what we have to say below, we think you’ll fall in love with it, too.

What is the Disney Skyliner?

Cute and practical (and free!), the Disney Skyliner is the latest addition to the Disney World transportation system.

With bright colors (and even favorite Disney characters!), the gondola cars soar above the trees to connect 4 Disney resort hotels and 2 parks together, making access across the Walt Disney World Resort easier than ever.

You can see how all the resorts, stations, and parks fit together on this Skyliner map.

Notice how Caribbean Beach Resort serves as a hub for all 3 lines?

That is important to know because depending on where you are going and coming from, you’ll likely have to transfer there.

But, although that may sound complicated, it truly isn’t. We go over it in more detail in the video below.

There are 5 gondola stations, 3 at Disney resort hotels and 2 at theme parks:

In addition, the Epcot station puts you within a short walk to the Boardwalk entertainment district where you’ll find lots of restaurants and things to do.

Important note: You can’t get to Magic Kingdom or Animal Kingdom from the Disney Skyliner. If those are your destinations, you’ll need to use another form of Disney transportation.

In true Disney fashion, these stations are very well themed and reflect the aesthetics of their location.

They fit right in and look fantastic!

If you are staying at a resort with a station and want to have a room close to the Disney Skyliner, make these requests:

Caribbean Beach
Note: Caribbean Beach does have an internal bus system so even though these rooms are further away from the main building, you’ll have easy access back to the front when you need it.

Pop Century
Note: There is no internal bus system here so the downside will be that you’ll be further away from the main building and bus stop.

Art of Animation
Note: There is no internal bus system here so the downside will be that you’ll be further away from the main building and bus stop.

The gondola cars themselves are also well-themed with about half being wrapped in artwork of favorite characters and attractions. They are adorable!

Each one can hold up to 10 guests, or up to 6 if there is a wheelchair or stroller.

Strollers up to 30″ x 48″ can remain open (much like they can on the monorail). Strollers larger than that will need to be folded up before boarding.

In addition to the bright, solid colors (like red, yellow, blue, green, and purple), here’s a list of the different characters, movies, and attractions you may see:

Note: even though the cars are wrapped, you can still see out the windows. However, for the clearest view (for things like photographs), consider asking the Cast Member if you can wait for a plain colored car.

If you do not have a stroller or wheelchair, you’ll board a gondola that is moving very s-l-o-w-l-y, like you do for Haunted Mansion or The Seas with Nemo and Friends.

Guests using wheelchairs or strollers will be directed to a separate loading area where they board a stationary gondola car.

What about air conditioning?

One thing that is interesting is that the Walt Disney World Skyliner gondolas don’t have air conditioning.

Instead they use a “passive ventilation system” (aka window vents) which allows the breeze to move through the cabins.

As long as the gondola is moving, the temperature inside remains quite comfortable. But, if the gondola stops for any reason, the temps inside the cabin do rise quickly.

We think it’s important to note here that there are attractions at Disney World (like the Tomorrowland Transit Authority – PeopleMover) that are outdoors and don’t have air conditioning, either – and it works just fine.

But, it wouldn’t be a bad idea to carry a folding fan that you can use if the car stops temporarily for any reason.

From our own personal experience, we haven’t had much of an issue with motion sickness on the gondolas. There is some slight swaying but overall they are very smooth.

Of course, if you are prone to motion sickness you’ll want to choose a seat that faces forward. Want more tips? We have an entire post about dealing with motion sickness at Disney World.

The operating hours for the gondolas tends to vary depending on what time the parks are opening and closing, but you can typically find them starting from around 7:30 am to 8:30 a.m. and going until 10 or 11 p.m.. Note: Disney does expand the hours during busy times of the year.

Unfortunately, as of right now, the only place the schedule is published is on signs outside of the stations.

We strongly recommend you do not rely on the Skyliner to get you to Epcot or Hollywood Studios for Rope Drop.

New for 2021 – buses running on a reduced schedule!

Disney has announced that bus service between Pop Century, Art of Animation, Disney’s Riviera Resort, and Caribbean Beach Resort will be reduced to once per hour while the Walt Disney World Skyliner gondolas are running.

When the gondolas are closed or not running, buses will be dispatched to transport guests between Epcot and Hollywood Studios and the above mentioned resorts.

How the Skyliner gondolas work at Disney World (video)

Want to see the exact path these beauties take?

Disney has added the Skyliner to the My Disney Experience app.

And, here’s the station at the International Gateway at Epcot (it is at the top of the screen). As you can see, you fly over a lot of Disney parking lot space and enter Epcot between the France and United Kingdom pavilions:

Dining on the Disney Skyliner

Not only does the Disney Skyliner make it easier to get between some resorts and parks, it also makes visiting nearby resorts for dining a lot easier, too.

In particular, we’re a fan of taking the Epcot line over to the Boardwalk area which used to be so difficult to get to from other resorts.

Read all about everywhere you can Dine on the Disney Skyliner.

Tips for the Disney Skyliner

How to navigate Disney World transportation