Important note: this is the information from the 2018 Mickey’s Not-So-Scary Halloween Party.

Check out our 2022 Guide to Mickey’s Not-So-Scary Halloween Party for current information.

There are several special events offered throughout the year at Disney World and 1 of those is Mickey’s Not-So-Scary Halloween Party (MNSSHP) where people get dressed up in costume and attend special activities that are only offered at this party.

Here’s some info for you on the details of what takes place at the party, how much it costs, when it’s held, and thoughts on how to create a touring plan to use during the party.

Mickey’s Not-So-Scary Halloween Party is a party that takes place at Magic Kingdom.

How much does it cost?

This event is only available to people who have purchased special event tickets. Tickets range in price from $75-125 for adults, depending on the date you attend.

Are there discounts available?

On select nights, guests that are Annual Passholders or DVC (Disney Vacation Club) owners are able to save a few dollars on their tickets.

The discount starts at around $5 per ticket. To check on availability, log into your My Disney Experience account and navigate to Event Tickets.

When is the Halloween party?

On some nights in August, September, and October, Magic Kingdom park closes early so that Mickey’s Not-So-Scary Halloween Party (MNSSHP) can be held from 7 p.m. to midnight (though people with party tickets can enter as early as 4 p.m.).

People often ask how Disney filters out the non-party goers. The answer is that party attendees are given special bracelets to show that they are attending the party, and starting at park closing (which is 6 p.m.) Cast Members will usher out anybody who doesn’t have that bracelet.

Important note! The party will go on regardless of weather so even if it’s pouring down rain, it’ll be taking place.

If you don’t want to risk it by purchasing ahead of time (it is during hurricane season, after all), wait until you’re at Disney World to purchase tickets. Some dates like the very first night and Halloween do sell out ahead of time but many don’t.

What exactly takes place during the party?

Everybody is given a bag when entering the party, but you can bring your own if you’d like to get more as well.

Go later in the night to avoid lugging around heavy candy, to enjoy shorter lines, to benefit from Cast Members often generous portions later in the night, and to allow you to do more important things earlier.

Trick-or-treating is available in these locations in 2018:

People with food allergies: you can grab a teal bag from a Cast Member at any treat location and/or head to Town Square Theater and Liberty Square Ticket Center for allergy-friendly locations. You can collect teal tokens at the trick-or-treat stations which can later be redeemed for allergy-friendly treats.

Disney used to allow everybody to wear costumes during the Halloween party, but the policy has changed in recent years.

For Guests ages 13 and under:

For Guests ages 14 and older:

Dressing for the weather

Due to Florida weather, you might also want to make sure costumes are cool enough to wear in the heat and humidity, and choose something that can easily be covered in a poncho.

The parade is held twice during the party (at 9:15 p.m. and 11:15 p.m.). For easiest viewing, go to Frontierland for the second parade. The parade will come through that section about 15 minutes after the official parade start time so keep that in mind when planning.

In true Disney fashion, the parade comes with a couple fun “extras”:

Guests along Main Street waiting for the parade to start are treated to a Zootopia Party Patrol which features 2 of your favorite Zootopia friends: Judy Hopps and Nick Wilde. You can expect fun music from the movie as well as dancing during this brief pre-parade party.

And, as the parade start time creeps even closer, guests along the entire parade route are treated to one of the signature moments of the entire evening: the appearance of the Headless Horseman.

In Hocus Pocus Villain Spelltacular, the mischievous Sanderson Sisters from Disney “Hocus Pocus” return to the mortal world for one night during the Halloween season. With only a few hours to run a muck, the three sisters decide to use their magic to throw the best, most evil Halloween party this side of the graveyard!

A special version of Wishes called HalloWishes is shown at 10:15 p.m. during the party.

The best places to see fireworks are noted on the map below.

This dance party features Mike Wazowski and Sulley, and it takes place on the Tomorrowland Stage from 7 p.m. – midnight.

The Cadaver Dans perform their ghoulish medley of popular “tombs” for guests in Frontierland during Mickey’s Not-So-Scary Halloween Party at the Magic Kingdom.

In addition to the list below, you’ll also be able to interact with Mike, Sulley, George, Boo, Doc McStuffins and Timon at the dance parties.

The asterisk means it’s a popular/rare character. Meeting them requires lining up early.

Disney always has exclusive merchandise available to purchase during their parties. Here are the options for 2018.

Items can be purchased at The Emporium on Main Street and Big Top Souvenirs in Fantasyland. Pins are available at Frontier Trading Post in Frontierland, and costume pieces are available to purchase at Curtain Call Collectibles.

During the party, you can enjoy shorter lines on rides but there are no FastPass+ reservations available and not all rides are open.

Here’s what is open for the 2018 party (noticeably missing – Jungle Cruise):

Although you should definitely take advantage of the special party events, the ability to walk onto rides is a huge luxury that’s a lot of fun.

One ride you should definitely take advantage of during the party is Haunted Mansion where the maids and butlers are specially dressed for the party, there are storytellers and you can have your pic taken with the hearse driver.

Side note: Magic Kingdom is a great park to visit during the day of a party since fewer people want to be there due to the early closure. If you show up at 4 p.m., you’ll be able to ride plenty of things between 4 and 7, before the party even begins.

In addition to generally shorter lines, a few of the attractions will have special experiences on select rides.

Here are the ones that are available:

PhotoPass photographers will take special photos during the party and when you see the pics afterward, you’ll see something magically inserted into the photo.

Magic Shots for the 2018 party are available at these locations.

Though you should be careful about spending too much of your party time eating, there are some Quick Service and Table Service restaurants available during the party. Many of the Quick Service options even have Halloween-themed treats.

Table Service restaurants that are available in 2018 include Be Our Guest, Cinderella’s Royal Table, and Crystal Palace. You can book those at on the MNSSHP dining page.

Quick Service restaurants are also available. Here’s that list for 2018, including the ones that have special treats available for the party:

Plaza Ice Cream Parlor
Nothing unique being served for the party, but you can order hand-scooped ice cream and sundaes like always.

Columbia Harbour House (open until 8 p.m.)
No special treats here, but a great place to grab a bite to eat.

The Friar’s Nook (open until 8 p.m.)
No treats special to the party, but gourmet tots and frozen beverages available for a quick bite to eat.

The Lunching Pad
No special treats available, but easy place to grab a hot dog, pretzel, or frozen drink.

Treats available throughout the park

Party within a party? Yep!

Disney gives you options to book even more things once you’re inside the Halloween party.

These options provide treats and viewing areas for nighttime entertainment.

The dessert party provides a Halloween-themed version of the Tomorrowland Terrace Dessert Party.

This is not something that we generally recommend because it takes so much time out of the party and you should be able to easily find a spot to view the fireworks, but it might be a nice add-on for people looking to do something a little different during their trip.

Guests attending MNSSHP can pick up an exclusive Sorcerer’s of the Magic Kingdom card. For 2018, the card featured the Orange Bird and his “Juice-o-Lanterns”.

You can pick up yours at the fire station on Main Street. If you have your party wristband, you can get this card before 7:00.

For more info, see this guide to how Sorcerers of the Magic Kingdom works.

Get the party map

Here’s the 2018 party map to help you plan your night. 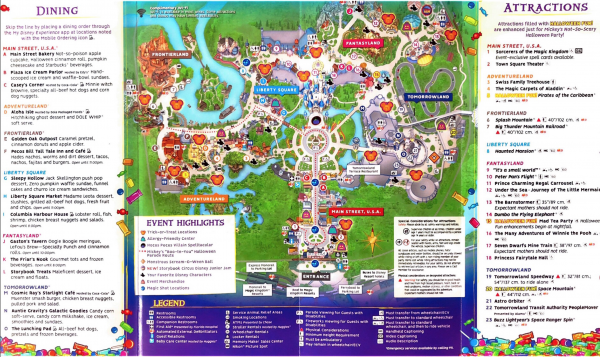 How to plan your time

In my opinion, these should be your priorities:

To fit it all together, this is how I would plan my time:

Is Mickey’s Not-So-Scary Halloween Party worth it?

The party is worth it for families that have kids that can stay up late, especially if you consider that you can think of your party ticket as your park ticket for the day but with special entertainment and shorter waits for rides.

For instance, if you’ll be in Disney theme parks for 7 days, you could get 6 day park tickets and also purchase tickets to the party. On the party day, you could use the first part of the day to rest or visit Disney Springs, and then go to Magic Kingdom at 4 p.m. to use your party ticket.

In general, Tuesdays are the least crowded day to attend overall, and August and September dates are less busy than October dates.

Disney is offering a Happy HalloWishes Dessert Package which provides a Halloween-themed version of the Tomorrowland Terrace Dessert Party. The price is $84/adult and $50/child.

This dessert party is not something that we generally recommend because it takes so much time out of the party and you should be able to easily find a spot to view the fireworks, but it might be a nice add-on for people looking to do something a little different during their trip.

Another bit of extra magic that can be added if you’re visiting Disney World in September or October is the special in-room celebration called Mickey’s Spooktacular Celebration where your room can be decorated for the occasion.

Is Mickey’s Not-So-Scary Halloween Party worth it?

The party is worth it for families that have kids that can stay up late, especially if you consider that you can think of your party ticket as your park ticket for the day but with special entertainment and shorter waits for rides.

For instance, if you’ll be in Disney theme parks for 7 days, you could get 6 day park tickets and also purchase tickets to the party. On the party day, you could use the first part of the day to rest or visit Disney Springs, and then go to Magic Kingdom at 4 p.m. to use your party ticket.

In general, Tuesdays are the least crowded day to attend overall, and August and September dates are less busy than October dates.

So what do you think? Will you be attending Mickey’s Not-So-Scary Halloween Party? Or do you have questions that weren’t covered?

Feel free to add your thoughts in the comments.

Check out the following FAQs: