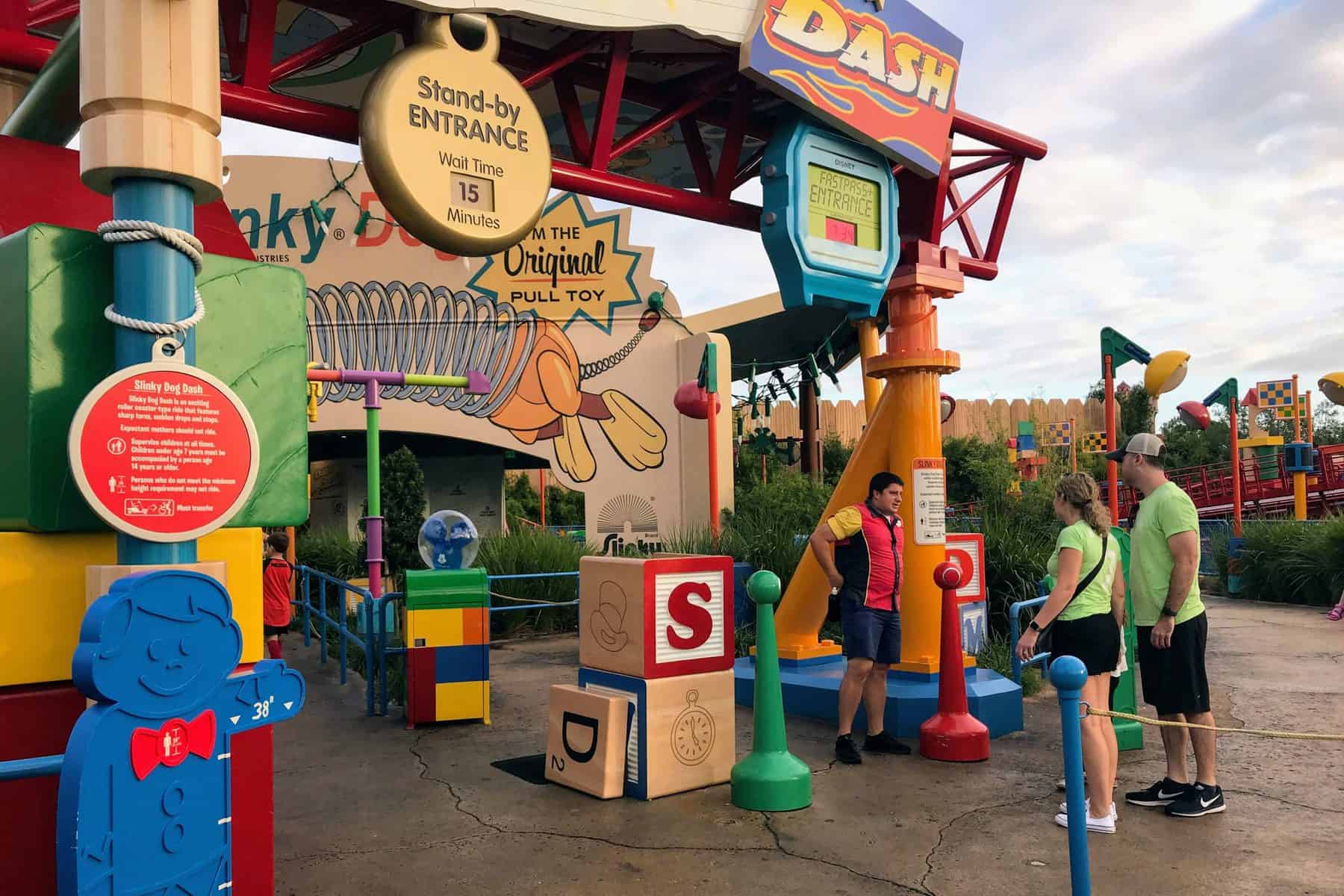 Hollywood Studios has seen lots of new stuff over the past couple years, including several new highly anticipated attractions like Rise of the Resistance, Slinky Dog Dash, and Mickey and Minnie’s Runaway Railway.

But all those fun new attractions also means there’s been lots of changes to the FastPass+ tiers.

Here’s what you need to know…

Disney has announced that for the time being, FastPass+ will not be available. But, don’t worry! We have you covered with updated touring recommendations.

Check out our guide on how to tour without FastPass+.

What do you mean by “tier”?

In 3 of the parks (Epcot, Hollywood Studios, and Animal Kingdom), FastPasses are divided into 2 separate pools, commonly referred to as “tiers.”

When booking your standard FastPass+ reservations, you can have a total of 3 FastPasses at a time. Of those 3, only 1 of your initial 3 can be from the Tier 1 category.

How to tour with the new FastPass tiers

We have Hollywood Studios touring plans that can help you maximize your time in the park.

Here’s our thoughts on your two tier 1 options:

This is our #1 recommendation and the Tier 1 FastPass we personally aim to snag.

Our reasoning is this:

Even though it has been open for a while, it still draws the huge crowds.

And, let’s not forget the differences in the queues…

Slinky Dog Dash’s queue is mostly uncovered and not protected from the sun (and rain).

It can feel like you’re standing on the surface of the sun. Truly.

The queues for Smugglers Run and Mickey and Minnie’s Runway Railway, however, are mostly covered, and includes sections that are air conditioned (with cool things to look at).

In addition to the “just how comfortable is it” to stand in, Slinky Dog Dash also doesn’t offer a Single Rider Line (which is a great option for some families!) and Smugglers Run does.

If you can’t snag a Slinky Dog Dash,  another good option will be Smugglers Run

That means if you want to ride Slinky Dog Dash (without standing in a long line) you’ll need to make sure you’re at the park at least 90 minutes before it opens so you can head directly there OR, if you’re a night owl, jump into the line towards the end of the night.

Mickey and Minnie’s Runaway Railway is a great option for families that are looking for a Tier 1 option without a height requirement.

But if a height requirement isn’t a concern we still think Slinky Dog Dash is your best bet (especially if you can use the Single Rider line over at Smugglers Run!).

Tier 2 attractions are a bit easier to select.

Unless you don’t plan on riding the thrill rides here, your top 2 choices are going to be Rock ‘n’ Roller Coaster and Tower of Terror.

This attraction tends to have waits that are similar to Slinky Dog Dash; however, it also has a Single Rider Line. But, you can free up your morning to knock out other attractions if you opt for a FastPass here.

Is it scary? Yes … but if you love thrills this is a great option for a Tier 2 FastPass as the lines here can build after the 1st hour of the day.

This was once the hottest ticket in Hollywood Studios and it remains popular to this day. The capacity here has been expanded but it can still see lengthy lines form.

This is a great option for Tier 2 if you need a ride with no height restrictions.

This attraction is popular; however, the lines here don’t build as quickly as they do for the other Tier 2 attractions nor do they tend to be as long.

But, this is another good option if you need a ride with a lower height restriction.

This attraction is still popular, but, you can typically ride it with low waits without a FastPass.

For that reason, we don’t recommend using a FastPass+ here.

All the rest (no height requirements)

The rest of your options are all shows of one sort or another.

Of the ones on the list, the Frozen Ever After Sing-Along is probably the most popular so if you are interested in seeing that and you have a Tier 2 FastPass to spare, that might be a good option for you.

It is also a good one to try to snag as a 4th “bonus” FastPass after you’ve used your first 3.

You likely wont need a FastPass for the remaining options (Voyage of the Little Mermaid, Muppet*Vision 3D, Beauty and the Beast – Live on Stage, Indiana Jones Epic Stunt Spectacular, Disney Junior Dance Party!, and Fantasmic!) but if one or both of the two Tier 2 recommendations don’t interest you and you plan on seeing one of the remaining choices, it won’t hurt to grab it.

These are also good options for “bonus” FastPasses (which you can select only after you have used your initial 3 FastPass choices).

What about the other parks?

Looking for FastPass strategies for the other parks?

Check out the posts below:

You start with 3, but you can get more

Everybody starts with 3 FastPasses, but you can get additional FastPasses (one-at-a-time)  as soon as you use your 3rd FastPass.

Here’s how that works:

Some characters are just so popular that if you really want to meet them without a long line you’ll need to either plan to use a FastPass+ for them OR opt to visit at Rope Drop.

So, if you are traveling with somebody that has a character they really want to meet AND that character offers FastPass+, using it as an option makes sense.

If you really want to see and do all of the best-of-the-best attractions, you’ll have to pair Rope Drop with solid FastPass+ planning.

That means you’ll need to arrive to the front of the park no later than 90 minutes before opening (and we recommend even earlier during busy times of the year like the holidays).

To get the maximum amount of stuff done, pair early arrival with our Hollywood Studios touring plans.

When hours are extended, more FastPasses typically open up

Disney publishes their park hours about 180 days out, but the closer you get to your travel dates the higher the likelihood they’ll tweak those hours by opening earlier or staying open later (or sometimes both!).

When that happens, additional FastPasses open up for those new hours, which means if you missed out on something you really wanted before you may be able to snag it then.

If you don’t get what you want, keep trying

Some FastPasses are just hard-to-get, so you may not be able to get exactly what you want (at the time you want).

If that sounds like your situation make sure you check out our tips for how to get difficult FastPass+ reservations.

When picking your FastPasses, if you have little ones make sure you keep an eye out for height requirements and read up on how Rider Switch works at Hollywood Studios.

Have Hollywood studios FastPass+ questions? We’ve got answers! Here’s some of the most common questions we hear:

After the park opens, plan to ride several things in the first couple of hours without FastPass+, make use of FastPass+ for late morning/early afternoon, and then get additional FastPass+ reservations for later in the day, if needed.

How much does FastPass+ cost?

There are ways to purchase additional FastPasses, though. But, every ticket is eligible to book (in advance) 3 free FastPasses per ticket day.

Can I use FastPass+ during Extra Magic Hours?

FastPasses are not available during Extra Magic Hours.

How far in advance can I book Fastpasses?

Guests staying at a Walt Disney World resort as well as some select offsite locations can book their FastPasses 60 days in advance.

Everybody else can book FastPasses at 30 days out.

Annual Passholders without a resort reservation can book up to 7 days worth of FastPasses at 30 days out, too.

Do I need a FastPass for everybody in my party?

Every person that plans to enter the FastPass+ line needs to have a FastPass.

We get this question a lot in regards to FastPasses for characters.

Even if you’re just going along with your child so they can meet Mickey Mouse, you’ll still need to have a FastPass to enter the line with them.

What happens if an attraction breaks down during my FastPass window?

If an attraction breaks down or if weather closes an attraction during your FastPass+ window you’ll receive a push notification in the My Disney Experience App.

Typically you’ll receive another FastPass that you’ll be able to use at any (or nearly any) attraction for the remainder of the day.

You wont have to make a new reservation and there wont be a return window – you just pick an attraction and scan your MagicBand or ticket when you get there.