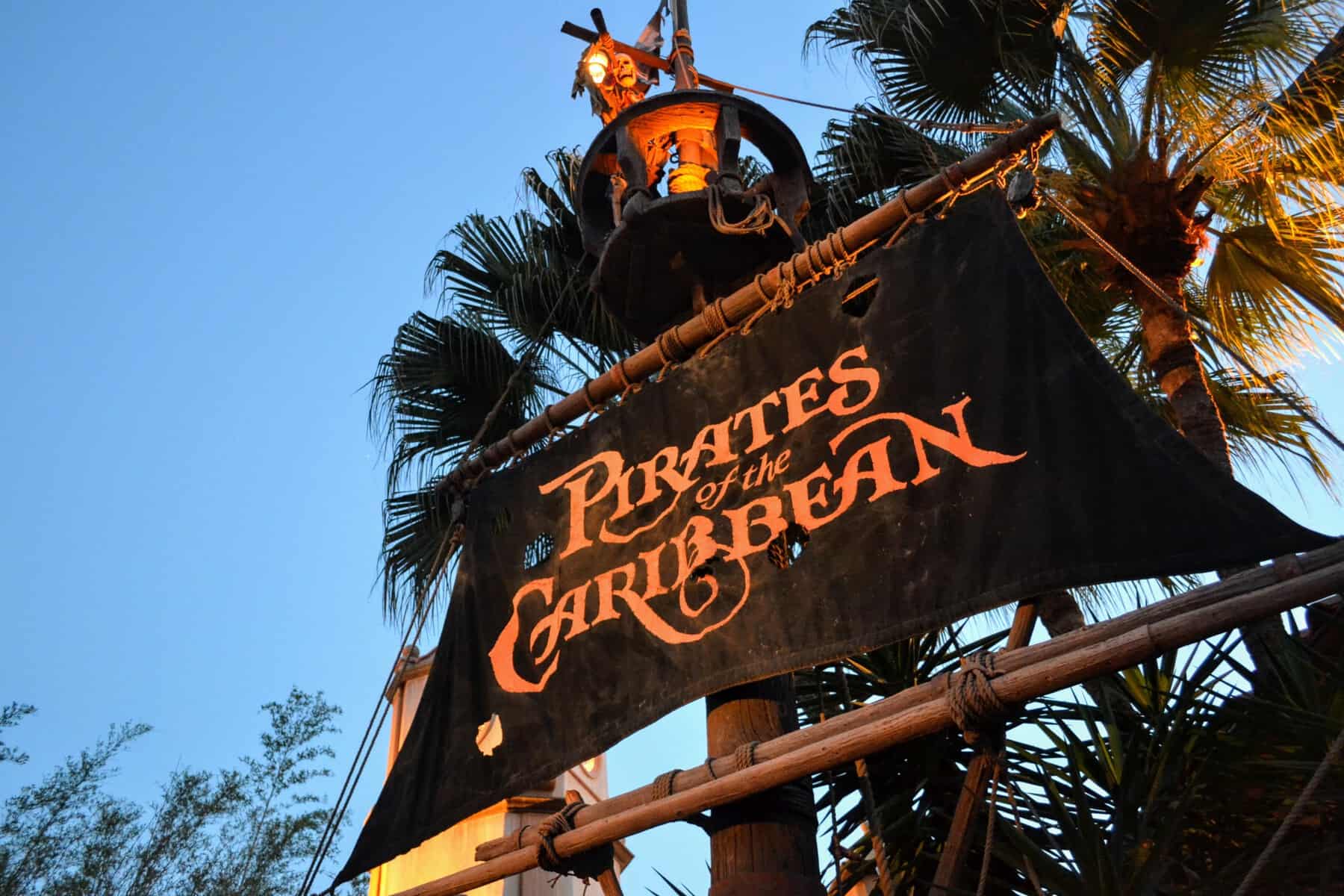 Fan of those filthy criminals of the seas?

Or maybe just a fan of Johnny Depp?

It is easy to get your fill of all things pirates at Disney World!

Here’s a list of what’s available at Disney including where to stay, activities to do, and things to buy…

For maximum pirateness (a word that I think should exist), you should definitely consider a stay at Caribbean Beach Resort where they have a section of pirate rooms. 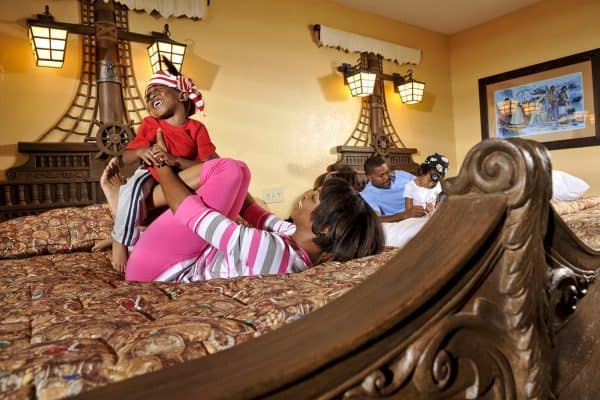 A word of warning: these rooms are located in Trinidad South which is a section of The Caribbean Beach Resort that is the furthest away from the main building. I normally only recommend Preferred Rooms at Moderate Resorts due to the distance so just be aware of that. Also, these rooms have full-sized beds, whereas the other rooms at the resort have queen-sized beds. 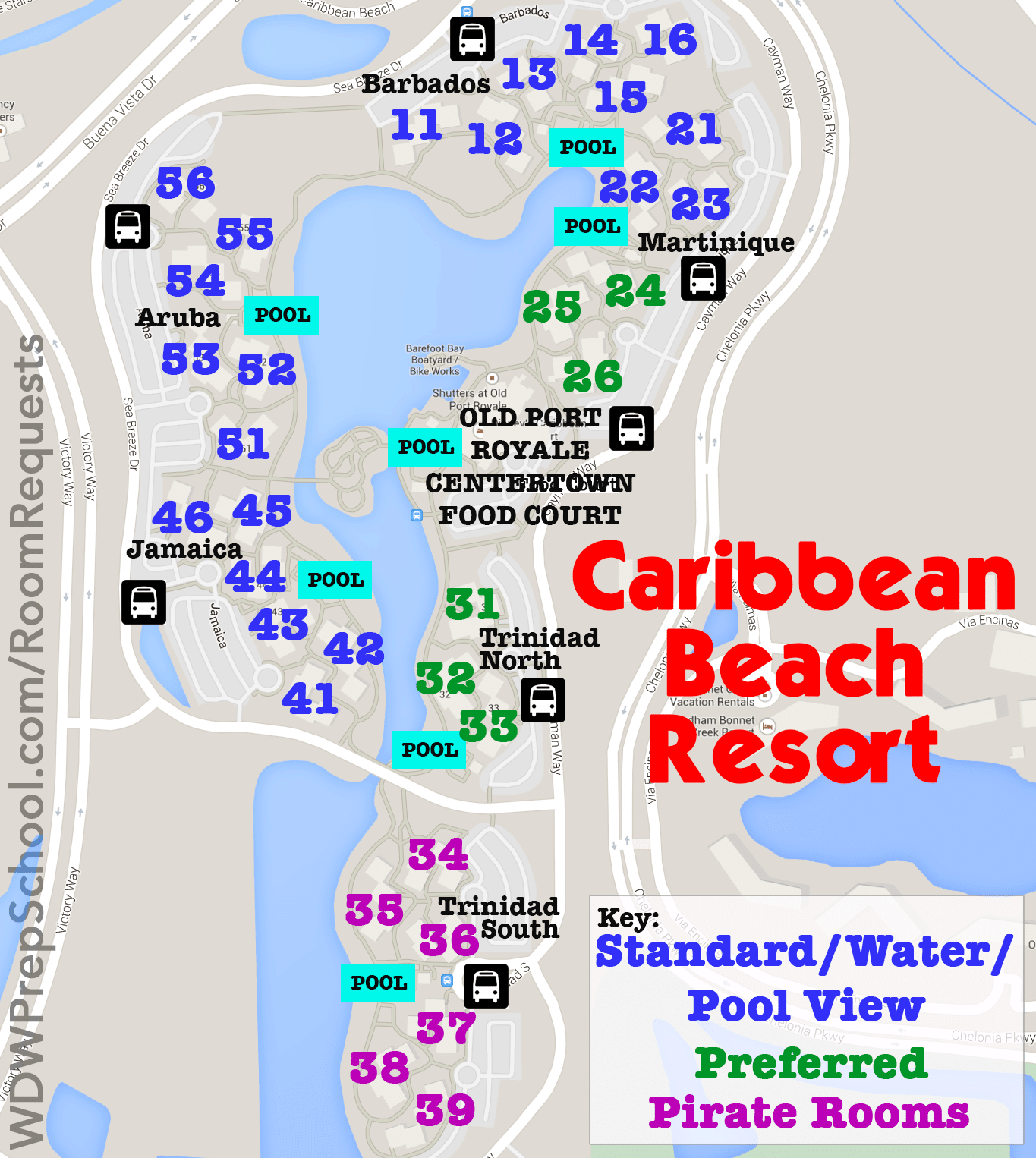 As a second option, you might want to consider a Magic Kingdom-area resort since that’s where most of the pirate activities take place.

For maximum convenience, Disney’s Contemporary Resort is close enough to walk, plus, you’ll also have monorail access to Magic Kingdom from here.

The least-expensive options of the Magic Kingdom-area resorts is usually Disney’s Wilderness Lodge (for deluxe-level accommodations) and Fort Wilderness Resort and Campgrounds, which has cabins in addition to spots for camping.

However, unlike the other 3 Magic Kingdom-area resorts, access to Magic Kingdom from here is via a boat, which may not be a bad thing if you’re going all-in on the pirate theme.

Order before your trip

Before you leave for your trip, you can place an order with the Disney Florist to have a gift waiting in the room or delivered on a specific day.

There are a few different pirate gift options to choose from including: 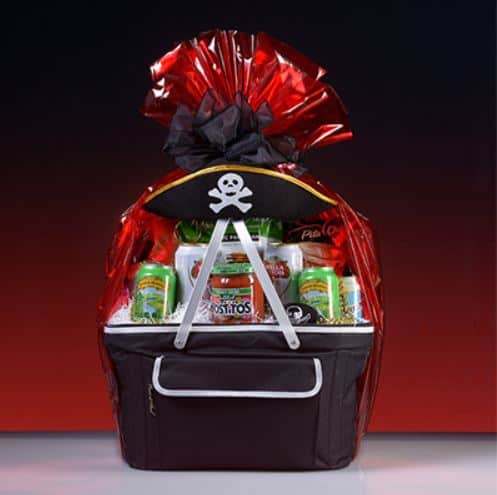 Where to find pirates at Disney World – Magic Kingdom

Now, normally we would list things to do in each of the parks but when it comes to pirates, Magic Kingdom is where almost all the fun is.

Pirates of the Caribbean ride

No way you can do all things pirates at Disney World without hitting up this classic and iconic Disney attraction.

Waits here can build throughout the day so try to ride it within the first 2 hours of the day or with a FastPass+. You can find when we recommend you ride it in our touring plans for Magic Kingdom.

Think of Pirates League as the Bibbidi Bobbidi Boutique for pirates and mermaids. 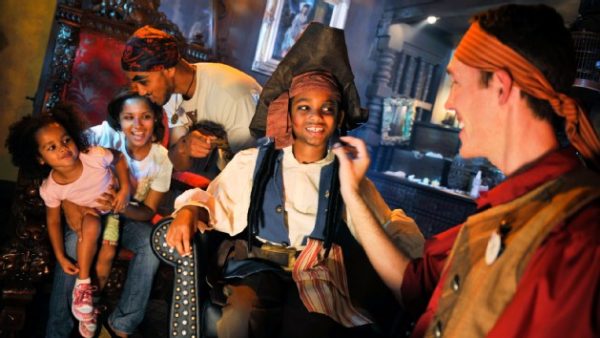 You enter near the Pirates of the Caribbean ride and receive your official pirate name right away.

Then you get the look of a pirate with a beard, earring, eye patch and scars.

After that, you enter a room to get your pic taken and get some treasure.

See this article with tips on Pirates League for more info.

A Pirate’s Adventures: Treasures of the Seven Seas

Similar to Agent P’s World Showcase Adventure at Epcot, this is an interactive adventure where you solve clues and make things happen.

Participants first get a mission, map and talisman from the Enlistment Center which is located near the Adventureland arches on the side toward Frontierland. 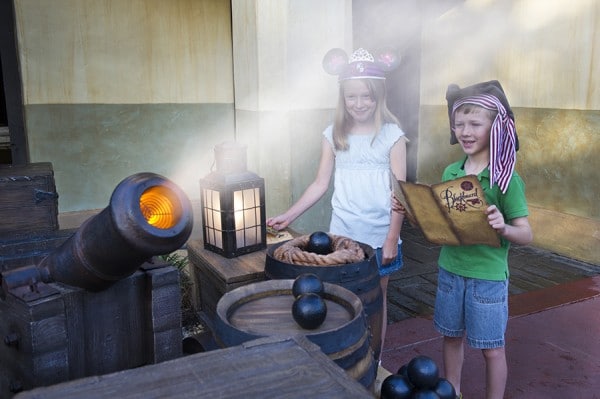 There are a total of 5 maps and you can do 1 or all 5 or something in between. It could be a relatively short activity in your day or be an all-day thing if you want it to be.

Here’s a video showing how it works. Notice that this guy uses his Annual Pass to activate things instead of the talisman. Anything RFID should work, which should include Magic Bands as well.

If you’re looking for some larger-scale pirates you can find those during Happily Ever After.

A definite crowd favorite, the pirates scene during Happily Ever After appears to set Cinderella Castle on fire as Captain Jack engages in one of his epic sword fights.

You can see what that looks (and sounds) like in the video below. The Pirates of the Caribbean portion happens around the 13:41 mark.

This pirate-themed restaurant is located in the – you guessed it – Adventureland section of Magic Kingdom (this area might as well be called Pirateland). 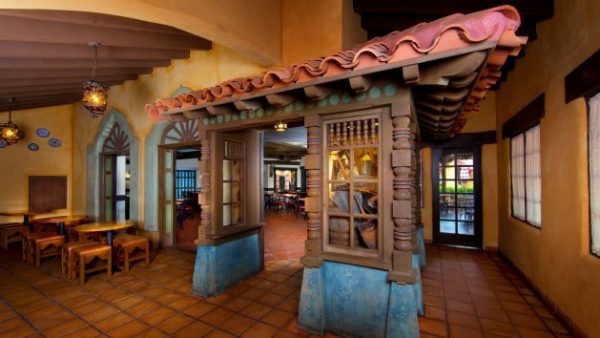 This is a Quick Service restaurant that serves things like burritos, nachos and taco salad (view the menu) and happens to also be pirate themed.

Special pirate-themed activities outside the parks

Outside of Magic Kingdom there are a couple other fun places you can find pirates at Disney World:

These cruises depart from 2 different Disney resort areas and are very similar with just a few, slight differences. These take place daily (weather permitting) from 9:30-11:30 for kids age 4-12.

Since parents don’t go on this adventure, it can be a good time for the adults to explore the resort, have peaceful breakfast, etc. while they wait for their pirates to return.

The price for the Pirates Adventure Cruises runs between $39-$49/child.

At the end, the booty is split amongst the children and a snack and drink are served. These can be booked by calling 407-WDW-PLAY. 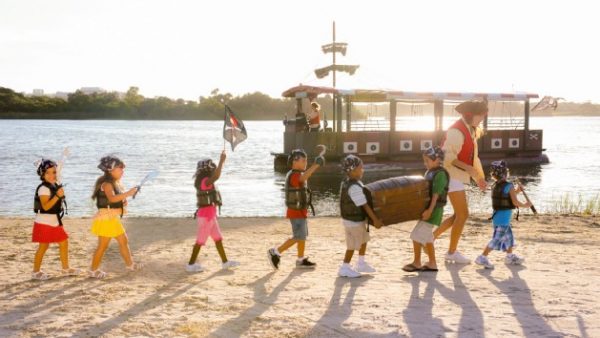 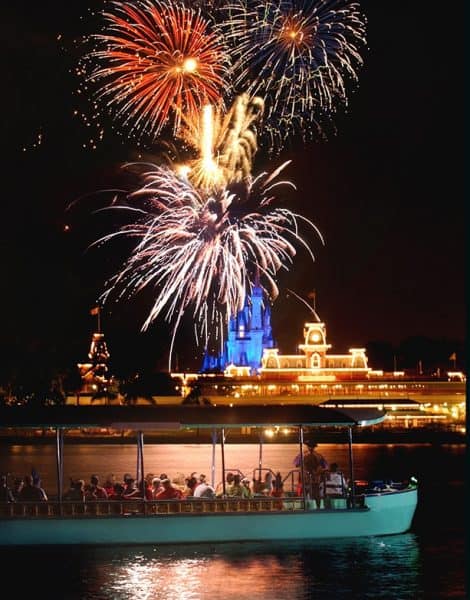 This is a totally different type of cruise which includes the whole family and not just the kids.

Participants meet at The Contemporary where there are lots of snacks (seriously, save room for them!), drinks, activities, games and photo ops with Captain Hook and Smee.

After that, everybody boards their pontoon boat (note: no characters board with you) where the host asks lots of trivia questions and you are positioned to watch Magic Kingdom fireworks.

The cruise takes place daily (times vary and depend on the fireworks schedule that night – good to confirm the time just before your trip) and costs $69 for adults (ages 10+) and $41 for kids (ages 3–9). Reservations can be made by calling 407-WDW-PLAY.

There you have it! Lots of fun ways to satisfy the mateys in your group. Did we forget any other ways you can experience pirates at Disney World? Let us know in the comments.