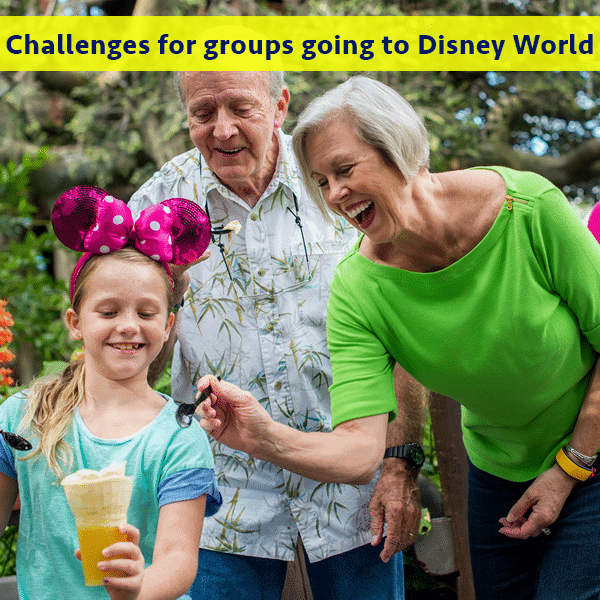 In this episode, I discuss challenges often faced by groups going to Disney World, including picking when to go, where to stay, places to eat, and touring.

I also have a quick tip about the dining plan, recent news, and a featured company.

Groups going to Disney World should consider not doing everything together, assigning 1 person to manage My Disney Experience reservations, sharing responsibilities (such as food or Tinker Bell gifts), and getting Memory Maker.

Some areas where challenges often come up include:

Adding a Disney Dining Plan to a reservation is usually something you can only do if you purchase a package, but you can add it to a room-only reservation if you call Disney or book through a travel agent. People who rent points can also add a dining plan to their reservations.

Today’s featured company is Mom Approved Costumes who has washable, glitter free, non-itchy, packable costumes for kids. Use code “wdwprep” at checkout to save 10% on purchases.

The magic bands for my December trip just arrived, but there were no luggage tags included - are there restrictions as to who can get the tags?

I didn't get the luggage tags either. Had a complete package and travelled in late October.

I read somewhere that the tags are underneath the bands in the box. Not sure if it's a tray type box....

The tags go to people who have booked packages. People w/room-only reservations don't get them.

Do many people stay the after marathons? Just worried that the star wars mini marathon will make the parks busy for our trip :) we head to Disney April 18th

Just listened to the podcast, and I rewound 3 times and still can't make out what you said about Whispering Canyon Cafe. Sounds like "complete honor-y ness"?

I agree with Emily. Something about orneriness, like the wait staff will be feisty with you, all in fun of course.

I think it may have been "complete orneriness", but I might be wrong.