Well, we finally have an end date for A Taste of Epcot International Food & Wine Festival. The special event first kicked off on July 15 and will conclude on Nov. 22.

It was previously announced that the festival would last into fall 2020, but we weren’t given a specific end date until now.

This year’s Food & Wine has been a modified version due to the going pandemic. There were still plenty of kitchens to enjoy, but workshops, seminars, and most entertainment was canceled, including the Eat to the Beat Concert Series.

It also became the longest festival yet and also included a few Epcot International Flower & Garden Festival additions, since the latter got cut short due to Walt Disney World’s temporary closure in March. 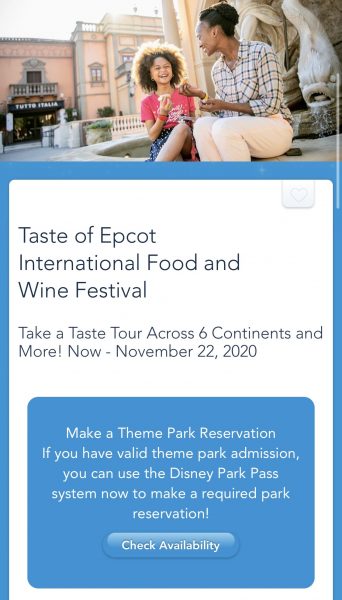 Following Food & Wine will be the Epcot International Festival of the Holidays, which begins on Nov. 27, just five days after Food & Wine ends.

This year’s Festival of the Holidays will also be modified, including the cancellation of the Candlelight Processional.

But, there’s still plenty to look forward to, like holiday kitchens, JOYFUL! performing R&B, Gospel, contemporary, and traditional Christmas and holiday music in the World ShowPlace and Voices of Liberty singing at the America Gardens Theatre.

Guests can also look forward to holiday cavalcades and an appearance by Santa Claus, who you can’t meet, but he will say hi and probably give a few “Ho, Ho, Ho’s!” The holidays at WDW officially kickoff on Nov. 6 and run through Dec. 30.

Festival of the Holidays menus haven’t been posted yet, but we will let you know as soon as they are. Until then, be sure to enjoy Food & Wine through Nov. 22.