For the first time in forever Walt Disney World visitors can actually enjoy a quality stage show since the resort reopened in July.

For the First Time in Forever: A Frozen Sing-Along Celebration is finally returning to Hollywood Studios on Monday, Oct. 5, Disney announced late on Saturday, Sept. 26.

According to Disney, the stage show located in Echo Lake near Mickey & Minnie’s Runaway Railway will be the same show fans remembered before the park temporarily closed due to the ongoing pandemic.

But, there will be health and safety protocols put in place to protect guests, Cast Members, and the actors on stage. Specifically, there will be “adjustments to staging and audience seating to allow for appropriate physical distancing.”

Social-distancing measures have been put in place for most everything at the parks and resorts, including dining, attractions, cavalcades, and theater shows like the Beauty and the Beast Sing-Along in Epcot. 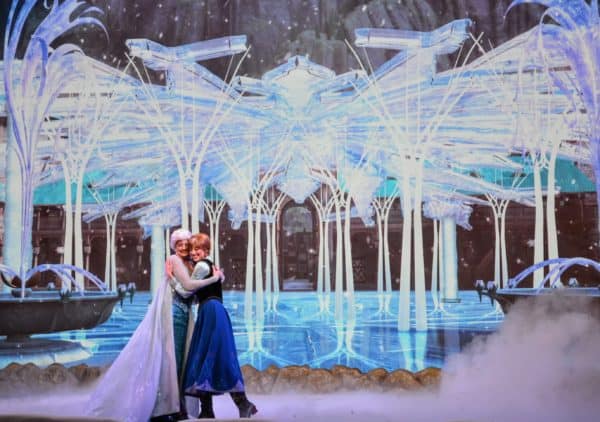 If you’ve never seen the Frozen sing-along, the show follows the Royal Historians of Arendelle, as they give their own comedic retelling of their kingdom. And, yes, they are very funny.

Of course, since this is a sing-along, you are encouraged to sing out loud to the beloved songs from the popular film. Don’t worry, Anna, Elsa, and Kristoff also make special appearances.

Now that the Actors’ Equity Association and Disney reached an agreement in August, actors can finally return to doing what they do best — showing off their amazing talents and allowing park goers to have even more fun in the process.

Unlike some other cutbacks that have been seen around the parks, including the Grand Floridian Orchestra Society giving their final performance on Oct. 3, it’s nice to see that A Frozen Sing-Along Celebration is returning to entertain park guests once again.