Earlier this summer as the news about Disney World reopening began rolling out, we were very curious about what to expect when we made our first visits. And honestly, we spent a lot of time wondering if we would like it or even if it would still feel magical.

Thankfully, after a few times back we can now say that we still love it, and in fact, there are some things that have been put into place due to the pandemic that we hope remain.

When Disney announced that there would not be any of the traditional character meet and greets, we understood why since those kinds of interactions just can’t happen in the current environment.

But, we’d be lying if we didn’t say we were quite sad at the thought of not seeing the characters in the parks. After all, it was difficult to imagine the parks void of our favorites.

Imagine our delight, then, when we saw what Disney had planned. Little did we know just how much we would love all the new ways the characters have been introduced in the parks. And I do mean love. 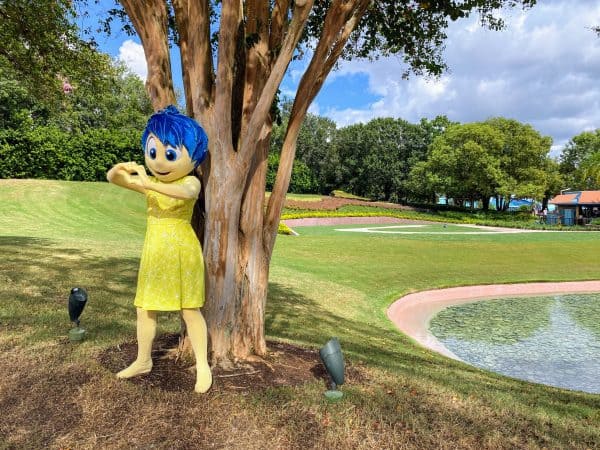 You know what? Love might even be an understatement because seeing the characters out and about in the parks (all at safe physical distances, by the way) has been, in our opinions, one of the best things to happen in a long, long time.

Lines generally aren’t magical, but in recent years if you wanted to see any characters face-to-face your only options were via character meals OR after waiting in a line (sometimes a LONG line) to have a few moments with them.

And if you’re traveling with someone that wants to simply see the characters but not necessarily get too close to them (a common thing with small kids, by the way), aside from the parades, your options for seeing the characters without having to wait in lines were basically zero.

But these character pop ups that Disney has added? It makes it feel less like the characters are an attraction and more like they are the residents of a magical kingdom and we are just visitors in their fantasy land. 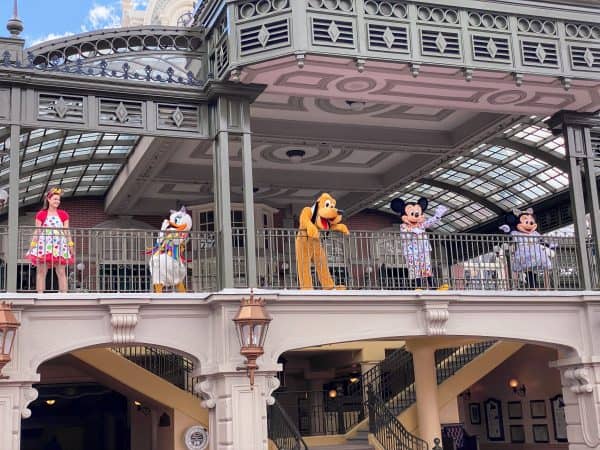 Read more about where to find characters in the parks right now.

This may seem like a weird thing to include on a list of things we hope stay but hear us out. If you’ve ever driven to one of the theme parks in the pack of cars aiming to arrive at park opening, you’ll know why we love the parking every-other-car thing so much.

We know that Disney is doing this right now because it helps guests that are arriving to stay physically distanced.

But, now that we’ve done it over the past couple trips, we love it because it just makes getting out of the car so much easier!

When we arrive to a park we need a few minutes to get ourselves ready. Get masked up. Reassemble, if you will.

Plus, maybe we’re the only ones, but it never fails that we go to open our car door at the same time the person next to us is opening up their car door and then neither of us can get out. Or we get locked in this strange duel where we each mouth through our closed windows to “go ahead”.

And when you have a stroller to unload and kids in car seats to unbuckle and bags to grab and little ones to wrangle, if you have a car parked right next to you with another van load of people needing to do the same thing, it can be stressful trying to get what you need done DONE while at the same time staying out of the way of the people next to you. 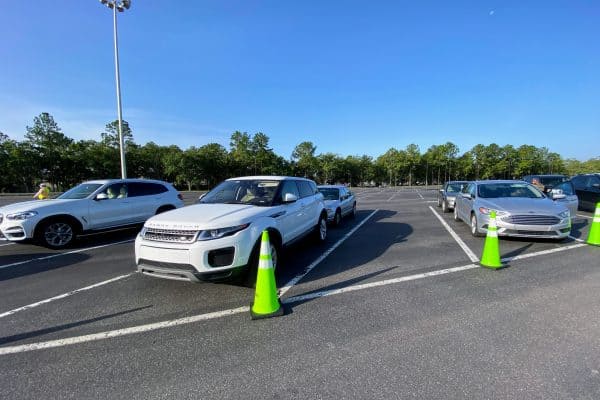 But all of that angst has been removed by simply parking every-other-car.

And, as an added bonus – those empty spots don’t stay empty for long. Nope. After the rows clear out of people, the parking attendants will go back and fill in the spots, which is great for people arriving a little bit later since parking lot trams aren’t running right now.

This is just one of those little things that have made morning arrivals for people that drive a bit easier.

Read more about how parking works at Disney World.

Cavalcades instead of parades

Parades are fantastic, or at least they are in theory. And you can bet your backside that we’ve shelled out for premium parade viewing at both Mickey’s Not-So-Scary Halloween Party and Mickey’s Very Merry Christmas Party because those parades are spectacular.

But for several years now, Magic Kingdom hasn’t had a regular non-party nighttime parade – they’ve only had a daytime one – and the other parks haven’t had parades for years and years.

So, while we do love a Disney parade, we don’t like the fact that for quite some time now your only way to see one was to wait in the hot sun for the middle-of-the-afternoon Festival of Fantasy parade (which truly is a lovely parade) or catch the lesser Move it! Shake it! Mousekedance it! street party thing.

And that was it folks. Those were your only parade options across all 4 parks at Walt Disney World.

But in addition to the fun pop-up character opportunities that we mentioned up above, Disney has added cavalcades (which are just mini parades, if we’re being honest) to all 4 parks. 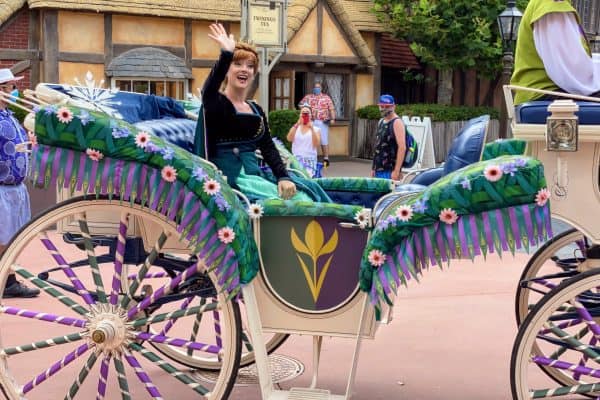 And we love them. I mean we absolutely love them.

They aren’t scheduled which means no waiting in the hot sun. And they are plentiful, which means if you spend any time at all along the routes you’ll likely see 1 (or more).

And again, it makes you feel like you’re visiting the characters on their turf which is just all sorts of fun.

Read more about the cavalcades in each park:

I believe it was last year that Disney had at least 1 of their Food & Wine booths inside of the theater in the Canada pavilion. Maybe there were more, but at this point in 2020 we can barely remember what May looked like.

Trust us when we say, though, that your options for dining inside during Epcot’s Food and Wine Festival have always been greatly limited.

But this year Disney has done things a little bit different.

There’s a giant building located between the United Kingdom and Canada pavilions called the World Showplace that is utilized for competitions and media events and now for 2020, they’re using it to house four of the Food and Wine booths.

This is a game changer for us. I mean, it isn’t any secret that we love food almost as much as we love wine. But, do you know what we don’t love? Standing in lines in the sun and eating off of trashcans.

This year, though, we ate macaroni and cheese while sipping beers and chomping on cake pops – and folks – that was all indoors and far, far away from any trashcan-tables! 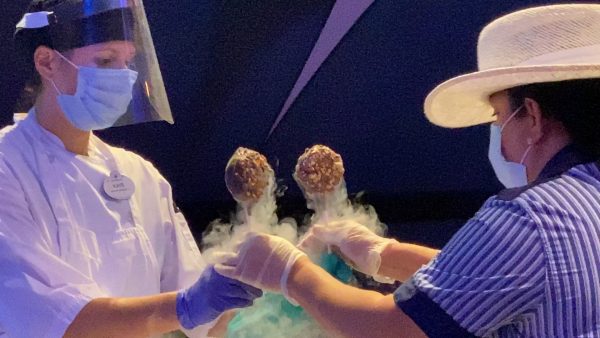 If 2021 rolls around and this little gem is gone, we will be devastated. Do you hear us? We will be DEVASTATED.

Are we being overly dramatic? Yes. But man that was the perfect setup for Food and Wine Festival wimps like us.

We can hear it now: “Why all the character stuff?” and you’re right. This list is rife with character stuff. But, as you can see, we’re really digging some of these new procedures.

Yes, we know that the changes are in place to keep us all safe, but we’ve found that in some ways they’ve also made things more enjoyable, including at character meals where the characters no longer go table-to-table.

Now, to be fair, not every character meal is created equal and right now you only have 4 options. And we also know that there are lots and lots of people that love jumping up every few minutes to hug that snuggly Pooh or Donald or Goofy.

But, there is something super low-pressure about not having to worry about making small talk with Snow White while you chow down on steak. 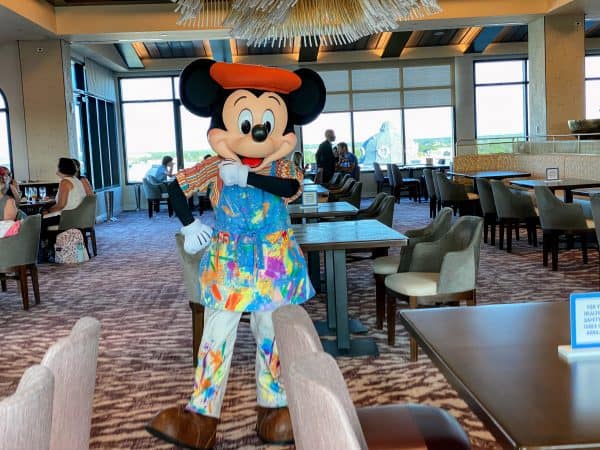 We don’t want to hurt Mickey’s feelings but there’s only so much to “talk” about. As much as we love them, we’re just awkward at the character game.

But now that the characters just dance around and wave to you from 6 feet away, you can gleefully gnaw on your plate of bacon while you take in their cuteness.

We expect that there’s lots of people that will be happy when character dining goes back to the old way, but for those of us that are super awkward (or for families with little ones that like looking at the characters from afar) this change is winner for us.

Disney has been incorporating more and more contactless options and we are loving it.

Menus. Resort check-in. Table Service check-in. While not universal, you’re gonna see these options more and more in the parks.

And while the Cast Members are definitely some of the best parts about visiting Walt Disney World, making the items we listed above contactless just makes a lot of sense.

Guests still have the options of speaking directly to somebody, but for many of us we won’t need to and that means we can avoid crowded spaces and lines (when checking in for dining or to our resort).

And using our phones for menus is quick and easy and means one less thing to touch.

Read more about how to check-in for your resort online at Disney World.

In all fairness we know that during regular times, in order to keep waits to a minimum and to move Guests efficiently throughout the entire Walt Disney World Resort area, it made sense to maximize the capacity of all the different transportation options.

We get it. Really. And we appreciate their efforts.

But at the end of a long park day the last thing we ever wanted to do was be crammed in a bus with 70+ others. 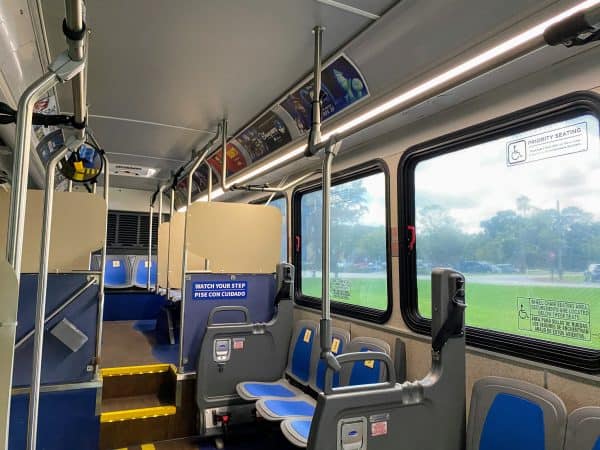 We know how we smell after a day in the sun, and folks it isn’t always pretty. You can only re-apply deodorant so many times before your armpits give up.

We understand that the current model, while safest, isn’t the most efficient. But maybe after we get through all of this we can find a happy medium.

What about things we hope will come back?

Curious about what we hope comes back?

Find out what we hope returns to Walt Disney World.