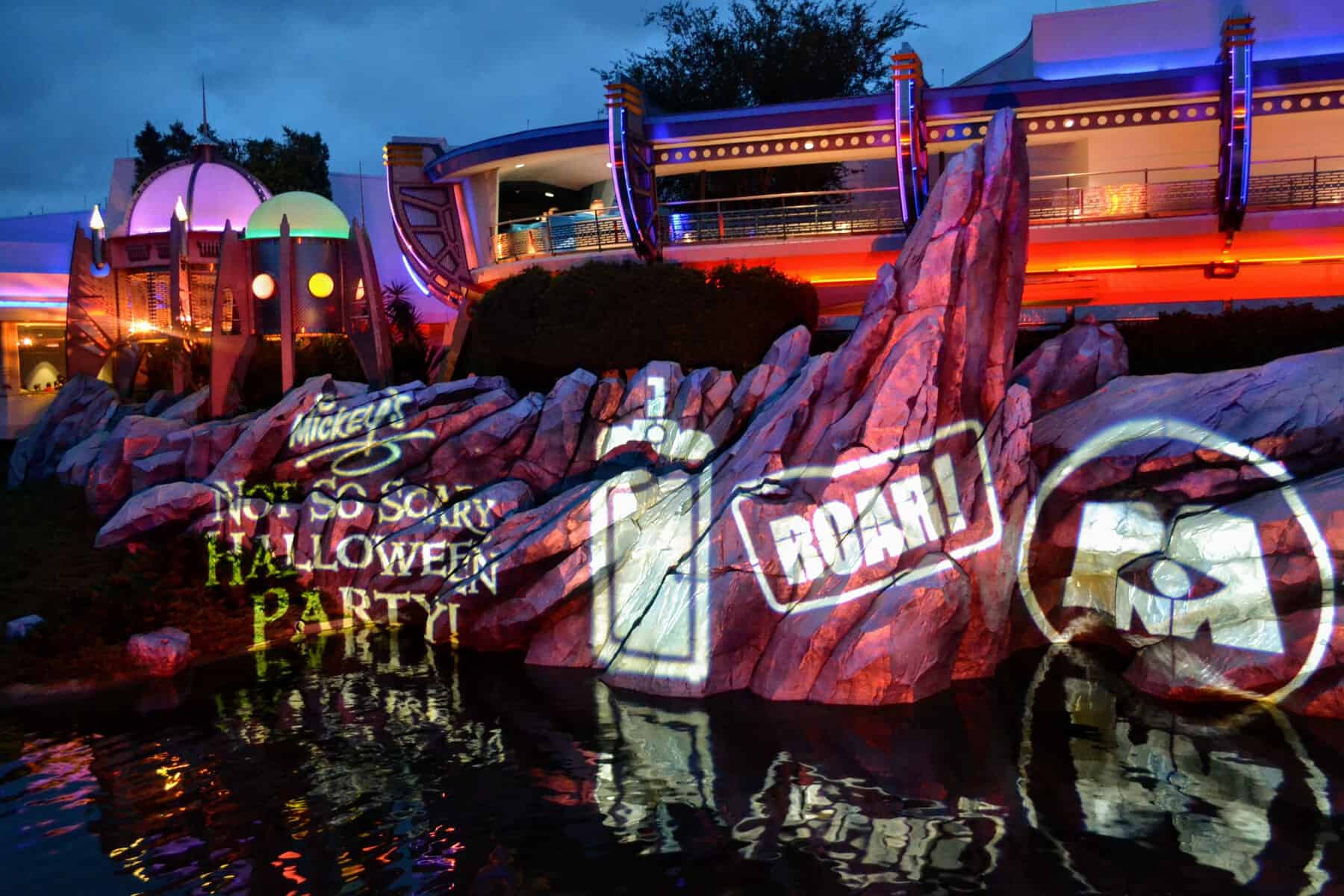 Mickey’s Not-So-Scary Halloween Party is one of the most popular events at Disney World, and it comes all sorts of opportunities to celebrate the holiday in a family-friendly style.

With tons of rare characters, lots of candy, and the opportunity to dress up in costumes, this party is sure to please fans of all ages.

Here’s some of our favorite tips for making the most of Mickey’s Not-So-Scary Halloween Party.

Although we aren’t going to see the full Mickey’s Not-So-Scary Halloween Party return for 2021, we will get to celebrate the spooky season at Magic Kingdom with the new Disney After Hours Boo Bash.

Much like the other popular After Hours and Disney Villain After Hours events that have previously been held at Magic Kingdom, the Boo Bash will also be a specially-ticketed event that will have all the most popular attractions open.

And, while it won’t have the amazing Boo to You Parade or fireworks, you will be able to see fun, Halloween-themed cavalcades and go trick or treating.

This event will be held select nights beginning in August. No word yet on ticket prices, however, Disney has said that on-site guests would have an early purchase window.

Read more about the new Disney After Hours – Boo Bash

You will also be able to celebrate the holidays with Mickey and friends.

Disney Very Merriest After Hours will be held on select nights from November 8 though December 21.

Read more about the new Disney Very Merriest After Hours

We sometimes feel like we sound like broken records, but planning ahead for a vacation to Walt Disney World is very important.

And if you’re planning on attending Mickey’s Not-So-Scary Halloween Party (or MNSSHP for short), you’ll definitely want to spend some time plotting out how you’ll spend your hours at the event.

To help with that, we have a comprehensive Guide to Mickey’s Not-So-Scary Halloween Party that covers everything from where to dine to how to tour to where to find the best merchandise.

Make sure you review that ahead of time so that you’ll be able to maximize your ticket to the party!

Visit the popular characters before the party begins

The characters at Mickey’s Not-So-Scary Halloween Party are a HUGE draw, and it isn’t unusual for some of them to get lines that last 2 hours (or more!).

BUT some of the most popular characters start meeting guests before the party even begins.

For the shortest waits (and to keep from having to waste precious party time), consider meeting 1 or 2 party-exclusive characters before the party kicks off.

Get more info on meeting these characters:

People that live outside of Florida may be shocked at how hot the temps remain all the way up into November.

In fact, Weather Underground shows that the average historical temperature during October in Orlando is 89 degrees.

So, while costumes are allowed (and even encouraged!) you’ll want to be smart about what you wear.

Check out our guide on Costumes for MNSSHP before you get started planning your cute outfit for the night.

Opt for the 2nd Boo to You parade

On party nights you’ll have 2 options to watch the parade: one early in the evening and one late.

Unless there is rain in the forecast, we always recommend that 2nd parade, and here’s why:

Lots of people with little ones go to the parties and as their kids max out on fun, they start to head out leaving fewer people in the park.

Looking for the least crowded spot to watch the parade? We recommend Frontierland.

Not only will the crowds be less over there, the dark wood on the buildings make for a fun backdrop if you’re planning on taking any pictures of the parade.

Get your ticket ahead of time

Rain or shine, the party will happen.

In the past you could wait until the day of the party (or at least until after the day’s forecast was out) to purchase a ticket, but that isn’t the case any more.

Now, lots of the parties totally sell out so you’ll want to make sure that you have your ticket ahead of time.

In only very, very rare occasions has Disney cancelled a special event, so even if it is raining, the show will go on.

Certain aspects of the party, however, may not.

We’ve had instances where the Headless Horseman didn’t ride before the parade and times when the entire parade itself was seriously delayed, just to give you a couple of examples.

In those instances, patience (and knowing all the indoor activities and attractions available) are your key to making the most of a damp evening.

For shows with multiple times scheduled, consider the forecast before deciding which one to attend.

Use your ticket to get in early

Even though the party doesn’t start until 7 p.m., your party ticket can get you into the park starting at 4 p.m..

That means you’ll have plenty of time to check out a few of the attractions that aren’t available during MNSSHP and to grab some dinner.

It also means you’re able to visit another park the morning of the party without needing a Park Hopper ticket.

OR, if you are trying to save money, you can sleep in and only go to Magic Kingdom at 4 p.m. (meaning you can purchase 1 less day on your regular park tickets).

That 4 p.m. entry is a huge perk to the ticket and something we highly recommend you take advantage of.

Are you a DVC Member?

Good news! DVC Members (and their guests) get to enter the parks with just their party tickets beginning at 2 p.m..

Unless the party is the only time you’ll be spending at Magic Kingdom, you should focus your time on doing things that you can only do during the party:

One thing we do not recommend is to spend party time is dining.

Don’t waste those precious party hours at a restaurant you can eat at any old day of the week!

There are a couple of special dining and dessert options that are available. Find out what we think about those below.

Save the trick-or-treating until the end of the night

Trick-or-Treating isn’t just for kids (at least not at MNSSHP!).

And you’ll have LOTS of opportunities to give it a whirl at Mickey’s Not-So-Scary Halloween Party.

Throughout the park you’ll find Trick-or-Treat stations where you can snag some candy. The stations are easy to identify because of the large inflatables nearby.

Traveling with somebody with a food allergy? Allergy-friendly options are available, too.

We know all that free chocolate is tempting, but don’t go for the candy first thing.

Remember, you’ll have to haul all that candy around with you, and since most of the lines will be open until the end of the night, it makes more sense to wait and do the more popular things first (and save the candy for the end).

Didn’t bring a bag? Don’t worry! Disney hands out ones for free.

Magic Shots are one of the highlights of MNSSHP, and you’ll have plenty of opportunities to snag them.

Some of the photographers are great about automatically taking multiple shots but with others you may have to request them. Find a photographer on Main Street to do several shots at once.

Just a simple “can you please take some Magic Shots” is all you typically need, and the photographers are always happy to oblige.

Finally, if you want to maximize your time (and your fun) at Mickey’s Not-So-Scary Halloween Party you’ll want to make sure you’re well rested.

That will mean different things for different people (and families), but it’s generally a good idea to try to not do a late night followed by an early morning.

We also highly recommend you make time for a nap on the day you’ll be going to MNSSHP, too. Even a few minutes out of the heat can do wonders for your overall energy level so that when it’s time to party you’re ready to go!

Did you know that if you time your visit right you can see both Mickey’s Not-So-Scary Halloween Party AND Mickey’s Very Merry Christmas Party?

The trick is to plan to attend the very last MNSSHP and the very first Christmas Party.

Do you have any tips for Mickey’s Not-So-Scary Halloween Party? Tell us about them in the comments!